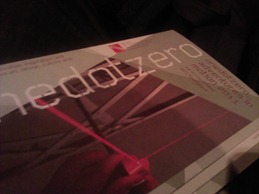 As anyone that has read this blog before knows, Red Badger has been developing on Windows Phone 7 since the very beginning. Now Mango is out, it’s features have got a lot more interesting. I have been waiting with bated breath to see what cool apps will be coming out on the platform now that Mango is readily available.
So, I was incredibly surprised and intrigued when I got an invite to the Alphalabs.cc launch event in collaboration with onedotzero Adventures in Motion Festival. If like me, you are into electronic music, motion graphics, animation, immersion and generally anything innovative, then you should find out who onedotzero are if you don’t know already. I have been coming to various events put on by onedotzero at the Southbank in London for years. This weekend they are celebrating their 15th birthday by running the adventures in motion festival at the BFI Southbank showcasing a mixture of interesting screenings (screenings include subjects such as; Bjork’s unprecedented contribution to the medium and art form of music video), interactive installations (you’ll probably hear me talk a lot about immersion in the coming months), talks and workshops, some live audio/visual performances and some educational conferences. I’d recommend it to anyone. 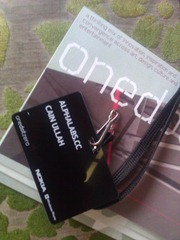 Anyway, back to the Alphalabs.cc launch event. I had no idea what to expect at all and I didn’t know who the guest speakers were either. After picking up my complimentary breakfast from Benugo and getting my pass we were ushered into the studio. There were the usual Microsoft suspects, Will Coleman and Paul Foster, both Microsoft Developer Platform Evangelists for Windows Phone 7. There was also a large contingent from the Windows Phone User Group including Matt Lacey on the presenter’s roster. There was however, a very mixed crowd. A clear mix of art/creative and tech.

Shane Walter – OneDotZero Creative Director, made a number of inspirational talks that if you have been to onedotzero before, you’d be used to by now. Particular things he said rang close to my heart, particularly when discussing how artists/creatives should be integrated with developers (integrated teams of creatives and developers is something we believe in and practice at Red Badger). Such quotes as “Everybody is creative” & “We are social beings” (asking everyone to turn first to their left and then to the right to introduce the audience to each other and watching our behaviour to prove his point) gives you a glimpse at the sort of stuff he was talking about. This talk painted a picture of what was to be demoed.

After an intro to Windows Phone 7 by Will Coleman and a brief talk from Nokia’s Keith Varty – Head of ecosystem & services – Nokia UK & Eire, we got onto some demos… 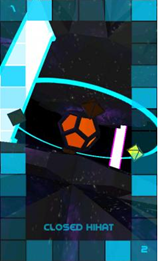 First up was Team Holotronica & Stuart Warren-Hill  with Vequencer. Stuart Warren-Hill is one half of the Hexstatic duo, a ground-breaking audio/visual electronic music act who’ve been experimenting with 3D A/V shows for years. Vequencer is a dynamic 3D visual sequencer. It basically allows you to use 8 instruments (such as bass drum, closed hi-hats etc. for you budding music producers out there) to sequence a live track loop in a 32 beat bar. As your track plays, there is a dynamic 3D visualisation in the centre of the application that reacts to your sequencing. I had a play and could have played with it all day. The 3D visualisation was written in XNA in collaboration with Martin Caine (of Retroburn Games) & Simon Jackson (both admins of the XNA UK Usergroup). What was also really cool was that there is a group collaboration option which allows multiple users (up to 8 simultaneously) of the Nokia Lumia 800 to connect their phones together and have a jam (presumably each person being in control of an instrument each). Matt Lacey (founder of the Windows Phone User Group) had developed the interface to allow the software to sync across multiple phones, a feature Stuart demoed to us across 4 Nokias. It was a truly engaging musical/visual app that (I’m sure to Microsoft’s pleasure) fully utilised the new WP7 Mango feature that allows apps to combine both XNA and Silverlight in the same application. All of this was developed in 2 weeks and it’s already looking very slick. There is a whole host of other features that could follow. Speaking to Stuart, he has every intention of his next album being produced entirely in Vequencer. I can’t wait for it to come out so that I can start making music with it myself. A great start to an entirely new type of use of Windows Phone 7.

Next up was Max Hattler and IndieSkiesGames to show Kaleidobooth. Max Hattler is a London based experimental moving image artist from Germany. He showed us some of his previous works all of which were very focused on symmetry. Kaleidobooth is an experimental art project using the Mango camera API to create a dynamic kaleidoscope application that adapts to both what the camera is looking at as well as sound inputs. What I found interesting is that Max had never worked with developers before so they discussed a little about their working environment, how they collaborated and the challenges they faced (Very much in the spirit of what Shane Walter had discussed earlier). Max was based in London, IndiesSkiesGames in Derby. They ran a tightly managed project using 37 Signals’ basecamp to collaborate. Again this was a 2 week project and the output was impressive. I didn’t get the chance to play with Kaleidobooth but it looks like a lot of fun and is due for release in early 2012.

The last demo was of Redshift. This is a 3D racing game through music videos created by digital art studio F’eld, Treehouse Dev, Edward Powell and music provided by artists from a favourite record label of mine - Numbers.  Presented by Vera Glahn of F’eld, Redshift was again a prototype that was only 2 weeks in the making but was already looking pretty impressive. It takes advantage of the Mango’s accelerometer and gyroscope features to allow the the user to race through a 3D world by changing the tilt of the phone in a steering wheel kind of manner. Visually it’s still in it's early stages but is looking like it’s going to be a really engaging, immersive game with a killer soundtrack blending electronica with hip-hop beats.

All of the above apps demonstrated a wide use of Mango’s new features and showed just how easy it is to develop on the platform in comparison to other platforms, showcasing some really polished (and complex) apps that were developed in just 2 weeks.

The collaboration with onedotzero to create Alphalabs.cc is a fantastic move by Nokia and Microsoft. It’s basically an experiment to merge technology and art to inspire experimental projects on the platform. If you sign up to alphalabs.cc you can start to submit your experiments to be showcased on the website straight away and there are cash prizes ranging from £500 to £5000 for the overall winner. 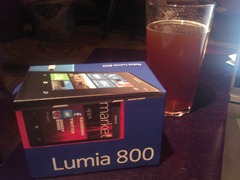 At the end of the session, everyone in attendance got a free Nokia Lumia 800 so I’ll be retiring my HTC Trophy 7 now and testing the Nokia. I’ll blog about the experience in the next couple of weeks hopefully. After the session I enjoyed a beer before heading off to see some experimental music videos from the likes of Michel Gondry at Wavelength 11.

Unfortunately there is only 1 day left of the onedotzero festival but if you get time, I would get yourself down to the BFI to see some screenings and art installations. Tatsumi at 15:50 today, a screening paying tribute to Yoshihiro Tatsumi would be a highlight for me.