BBC Connected Studio – Behind the scenes of Build Studio

Following the BBC Connected Studio’s first Creative Studio for Homepage, Navigation and Search – attended by Cain and Alex, we were one of nine ideas invited back to work on two days of rapid prototyping to prove our concept at the Build Studio. On Monday 21st and Tuesday 22nd , four of us – Stu, Haro, Can and I – went up to sunny Salford for a couple of days of intense developing.
The background of BBC Connected Studio is covered by Cain in his blog about the Creative Studio, so I will go straight into describing the two days.

After a smooth registration and a much needed breakfast, we gathered in the bright and airy 6th floor room at Dock House, Media City, Salford. This was going to be our home for the next couple of days.

Adrian Woolard (Project Lead R&D North Lab) got the day started again. Briefing was short and to the point, already feeling the heat of the day. Everyone in the room was itching to get started. All nine teams grabbed a table each and started straight away. Faulty power sockets were sorted out within a minute, and a mountain of sweets and snacks arrived shortly after – though unfortunately without Wagon Wheels (Much to Adrian’s disappointment). ;-)

While we were setting up and getting ready, Adrian and Eleni (Senior Product Manager of BBC Homepage) kindly gave us some brief feedback from the last session as none of us individuals attended the Creative Studio. Many BBC gurus stopped by to chat to us, and especially Ross – the personalisation guru – gave us lots of interesting insights. It was brilliant to talk through your ideas and try to explain concisely, the best way to visualise your idea with clarity.

We spent the rest of the morning reviewing what was available code/data wise, and planning what we were going to do. In terms of concept, we decided to be single minded and focus on one aspect of Cain and Alex’s original proposal, that evolved into “Discovering new content in real time”. In terms of code/data, we decided to start certain areas from scratch (rather than using the homepage code that the BBC provided) using Node.js alongside using the data provided as is. It was a difficult call, but given the time frame, we felt that would be the quickest route to what we wanted to achieve.

After a good lunch, we were running at top speed. Actually the whole room seemed to be running at top speed. There were lots of conversations and frantic tapping of keyboards. You could almost hear the hums from everyone’s brain working. We were all blinkered, totally focused on what we were doing. Everything must be done by 4pm the next day!

By the time we left the building, you could probably see some steam coming out from our (and everyone’s) ears… We had some much needed drink and food, then straight to bed! 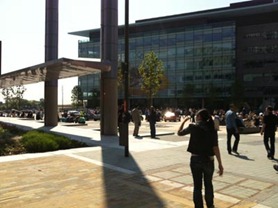 All teams were given a slot to talk to the audience in the morning to see what they thought of our concept. As Stu, Haro and Can were developing away, I picked up the task to take the audience through some flat visuals.

The audience responded to the idea very positively, and it gave us great insights. Some confirming our convictions, some giving us new ideas.
“It would definitely change the way I use the homepage”
“If it’s like this, I don’t mind logging in”

Encouraged, we worked through the afternoon, and before you knew it, it was 4pm. We were all still buzzing as we sat down for the presentation session.

Nine teams presented in a friendly atmosphere, all listening intently, exhausted but proud of what they achieved in such a short space of time. We were also keen to finally find out what all the other teams had been doing around us.

We presented some visuals to explain our concept along with the prototype. Stu wanted more from the prototype – as he always does having such a high standard! – but I thought what we achieved was just right as a proof of concept.

I personally really enjoyed presenting which I don’t usually. Talking to so many people before hand helped me hone what to say and the very positive atmosphere at the presentation undoubtedly helped too.

That was it. It was brief beer time then home time.

So what did we think?

These were a frantic and fantastic two days and it was amazing to see that everyone achieved so much. After all it was a sort of a competition, but it was such a positive and buzzing atmosphere, it didn’t feel like it.

It was a shame we had to run to catch our (very delayed) train at the end. It would’ve been lovely to catch up with everyone over some drink. But hey, I’m sure our path will cross again.

Big thumbs up and thanks to the BBC Connected Studios team. It was run very smoothly and everything seemed to go to schedule. We enjoyed every minute of it.

If you are thinking of attending the future events, go for it. It’s exhausting but so much fun!