It’s just over 3 weeks since the BizSpark Summit on 7th June. I’ve been so busy it has taken me this long to write a blog post about it. So here’s a summary.

There are 16,000 startups that are part of Bizspark in Europe so we were honoured to be nominated as one of the top 15. There was a really good bunch of talented startups presenting and lots of interesting people. The event as a whole was fantastic (I have written a little about the build up to the event here). There was an incredible amount of organisation that went into the event from the event organisers Forgather, to the input from Microsoft’s European Bizspark representatives spearheaded by Bindi Karia and the coaching from Mike Sigal. It was a busy couple of weeks leading up to the event (I think I must have changed my pitch about 10 times, the last change being on the eve of the event) with a full day of rehearsals (one run through per startup) and final feedback at Microsoft’s Victoria offices on the day before the summit. Drinks and food were put on by Microsoft that evening so that all of the startups and Microsoft Bizspark folk could mingle and get to know each other.

On the day we arrived early at Ravensbourne college (where we were former incubatees) to prepare our stands before the main event kicked off around 9:30. It was actually quite daunting as there was a crowd of approximately 300 people in the auditorium and all presentations were up on a big stage. This was a definite step up for me when it comes to presenting.

David Rowan, Editor of Wired UK expertly moderated the whole day with Dan’l Lewin (Corporate Vice President Emerging Business Development) doing the opening conversations and getting the day started.  I won’t give a running commentary of the day, you can find more info on that here, but I will say that the day was expertly delivered and there were some really interesting keynotes including Bob Dorf, author of the Startup Owner’s Manual. In-between the keynotes were the three sessions for the startups to present with five startups presenting in each session. I was relieved that I was in the first session so that I could do my presentation and then enjoy the rest of the day. 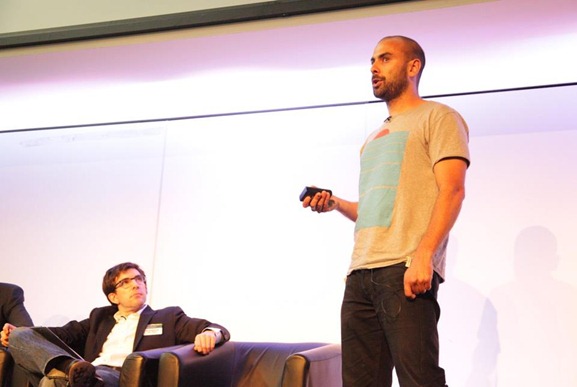 As I mentioned in my previous blog we were slightly different to the rest of the startups that were presenting because we didn’t have an actual product to show and the day was very product focussed with a large contingent of VCs in the audience.

So, I had five minutes to introduce who Red Badger were, describe the problem, paint a vision of how our product idea would provide a solution, describe the market, the business model, the competition, the team, and finally a closing message to the VCs. It was a hell of a lot to fit in and despite lots of practice, I ran over as did most of the other startups.

It was a very good experience though. The hardest bit was painting a vision. Quite a few people in the audience (and the judges) didn’t get what our idea was trying to do. It would have been much easier had I been able to show them what we had done. However, when we were in the breakout sessions, we had a lot of interest from people with experience in the industry who completely got our vision. So, overall it was a successful day for Red Badger. I personally have taken a lot out of the day and the whole process. I have learnt a lot from the coaching, taken some good feedback on board and look forward to doing things different when I am next presenting to a large audience like this one.

I think one of my favourite things about the whole event was spending time with the other startups. Apart from them obviously being very talented entrepreneurs with some excellent products, there were some great people too. There was a real sense of camaraderie between us over the two days. We were also all very different and although we were effectively competing against each other on the day, in the real world I don’t think there was a single competing product. The highlights for me were autitouch, theappbuilder, fittingreality & paperlit. Go check them out as I expect they’re going to continue doing great things for some time. Autitouch specifically impressed me as on the eve of the rehearsals, they had a pivot with some potentially ground-breaking research results coming through that changed their pitch at the 11th hour. Freena Eijffinger handled the change incredibly well to deliver a faultless presentation.

As for Red Badger, well, we’re hoping we’re going to be around for a long time too. We continue to innovate, building up a solid foundation and providing great products for our clients through Consultancy. Product plans are afoot however, so keep an eye out for us in the future.