How to build and launch a rocket in one night

We recently launched a competition 'Windows Azure Media Challenge' with Fluxx. The prize is to win an event called RapidStart. In the 11th hour* before the competition was introduced, I was asked to make a flyer to support it.

It ended up with a stop motion animated Lego rocket. And this is a blog about it. If you're interested in the competition, take a look at Fluxx's Paul Dawson's blog. 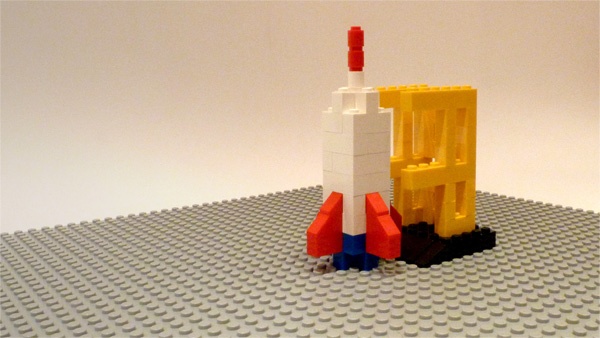 *It was 11th hour because I had forgotten that I had Paralympic tickets on the day I planned to work on this. My fault.

It's a few extremely intense days of creative workshop and rapid prototyping. We all gather, come up with loads of ideas, and produce something tangible by the end of the event. We provided UX/Design and Dev support for some of these events organised by Fluxx.

It's a bit of a whirlwind experience even for those of us who have taken party in a number of these events. New set of people, new set of problem solving and new set of challenges all the time. But it's always a very creative and productive few days, and it's fun.

My task was to illustrate the nature of these events. Quick prototyping in the way everyone understands. I was trying to explain this to my husband (a graphic designer and not-very-techie), and I was talking about sketches, origamis and Lego.

Wouldn't it be great to build something bigger with these bits? Something that starts things off. Something that launches stuff. Did you say launch? What about a rocket launch pad?

As it was a flyer accompanying the presentation, I had a vague idea of creating an animation as well as having a few static visual ready for the flyer. A Lego rocket launch pad was perfect for it. I could take photos to make a stop motion animation!

Luckily both Paul (Fluxx) and David (Red Badger) who were creating the presentation loved the idea and got a go ahead immediately.

I started the whole thing after my little boy (2.5 years old who was way too eager to help) went to bed.

As I only had a night (and was quite keen on the idea of sleep), I did quite a bit of planning before I started. I wrote down a list of shots for single pages to be used in the presentation. I downloaded a video of Saturn V rocket launch and created a mock up version so that I knew exactly how many frames were required and the compositions of each frame. I worked out the order of these shots to be most efficient.

I hung a sheet of paper over the kitchen table to create a back drop. I set up a tripod with my not-so-brilliant SLR and a bunch of masking tape to keep everything steady. The lighting was not brilliant, but there was nothing much I could do. And luckily, it looked quite stylish when I took a test shot. I was ready to go.

Then took a few more shots for other uses to finish the photoshoot. Like a bunch of Lego pieces to represent little bits of ideas at the beginning of the event.

And lots of different ideas.

All images for animations were put together in Flash for the presentation. Not sure if it was the best solution, but it did a job. Phew!

And here is the final animation that I stitched together later in iMovie. (In the presentation, it was separated to building bit and launch bit.)

It was good fun making this. And yes, I did get some sleep too!