We are now well into the second phase of BBC Connected Studio's pilot project 'BBC Now!', developing away. (If you haven't heard about Connected Studio, check out this blog post "Connected Studio: the first pilots" by Adrian Woolard.) The first phase has been about exploring what’s possible then distilling, finalising and crystallising our concept until we have something we are happy with.

What is BBC Now?

We have written a bit about the project already in other posts, but here is a quick summary of what BBC Now is all about:

The project was born out of BBC Connected Studio for Homepage, Search & Navigation in spring 2012. Our challenge and what our concept is all about is how to make BBC Homepage more dynamic and lively – giving visitors greater exposure to the content the BBC can offer and making that content more ‘real time’.

Our project champion Eleni has written a blog post about the concept and findings, so I am going to tell you a little bit about our approach in the discovery phase.

We kick-started this project by seeing just how far we could push our concept. This might seem an odd thing to do - after all it's a rapid prototyping project and time is tight so we could only do a fraction of what we discussed. But for us exploring the possibilities is a vital part of the whole process.

Think of it this way - rapid prototyping is not just about being quick. It's about being really focused on testing a specific proposition. We believe the only way to pin down the most important aspects of a concept is to explore the wider - if not the whole - picture. What would we wish for if we could wave a magic wand?

We were given access to a fantastic user testing facility at BBC in Salford to test out our early thinking. With archetypal rapid prototyping this is something we wouldn’t get an opportunity to do until the end of the project. 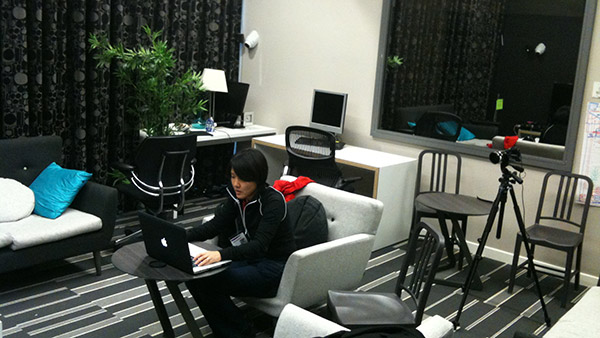 Having gone wide initially, we were able to hone in on a series of reasonably focused features that we wanted to test with users. We decided the best way to maximise the feedback we got was to create an animated Flash prototype with some functionalities, rather than creating a paper prototype.

As we were testing BBC homepage, we knew one of the most important aspects of user testing was to keep the content as real as possible, so that the lack of realism didn't become a blocker and we could be sure we were getting a more natural response to the concept.

(If you are a UX or a designer, I'm sure you know all too well how easily people can become fixated by random typos, the mismatch of image and text or latin as a placeholder. Something written down is always easier to talk about than generic concepts of 'layout' and 'experience'...)

We tried to capture a snapshot of what's going on the day before the testing, frantically cutting some images and adding text in xml.

The testing was very beneficial. We had many interesting insights. Some positive, some negative. All contributed to make our list of features more focused and informed for the next phase.

With an organisation like the BBC, there are understandably very strict sets of rules and guidelines that have to be adhered to. It affects all areas of project, from UX to development. But being a pilot, we are given a lot more freedom, which is great.

We often say that rapid prototyping is about 'fail fast and fail cheaply', but the important message behind this statement is to understand that, 'fail' leads to 'learn'. We all learn from mistakes, and it's the quickest form of learning.

So try something new and see what happens!