Last Tuesday we got together as a tech team (developers, testers, agile project managers) and held a Tech Round Table of 2012. The premise was simple - let’s make a list of all the tech we’d used in 2012 and then figure out what we liked best, what worked well and what we’d like to learn more of in 2013.

Each of us took a Post-it Notepad and a pen, and started a quick review of each project we’d worked on in 2012 - noting down the tech, tools, languages and platforms we’d encountered along the way. As we started to each stick up our list of tech, and roughly group them, it became apparent we were going to need a bigger space to complete the exercise than the wall I had initially chosen... 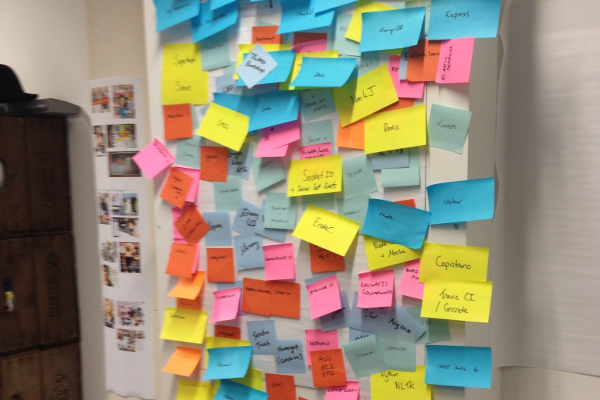 Too many Post-it notes...

We cleared a table and started to re-group the notes into more clearly defined categories until we had everything in more or less the right place and could clearly see each note and patterns started to emerge.

As we ran through each tech, sharing experiences and use cases it became clear that, bar a few examples, most everybody had, in one form or another, some exposure to most of the tech on the table. A fair amount of new tech to the team in 2012 had been learnt, implemented, tested and deployed to production. For those of us in the world of tech, we often take the level of change we encounter for granted, but it’s actually quite eye opening to take a step back and consider how much knowledge we are able to gain and put to great use in a relatively short space of time.

Where piles had appeared, we could start to see the most common tech in use across the team. When taken together it makes for a pretty awesome stack and one with which you could build a ton of truly cool other tech. In no particular order, the most in-use tech is:

Next up we gave ourselves 8 votes each (not quite sure why it was 8, but that was the number we settled on) and put a dot, star, or in the case of Jon & Stu, a smiley face on the tech we either liked the most and/or had the most interest in. Unsurprisingly, there was a fair amount of crossover with the most common tech in use, but the placing wasn't what you might expect:

The most popular tech is heavily littered with tools and frameworks that make development life easier; Vagrant and Jam taking the top spot speaks volumes about the way our team works. If you simply take the 4 bits of tech in 2nd place on their own, you could build a lot of fast and scalable applications in next to no time. 3rd place is occupied by more efficiencies in Jade creating cleaner, more maintainable HTML and Capistrano for taking the guesswork out of multi-environment deployment. It’s also nice to see a few bits of tech in there that we’re keen to do more of this year in Cucumber, JavaScript Code Coverage and Lawnchair. 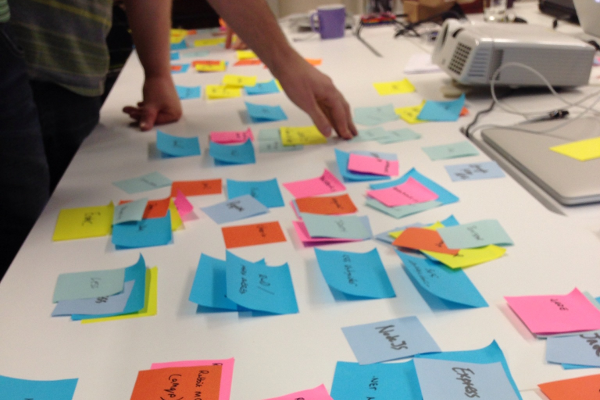 DevOps is both an emerging trend in the industry and something that exploded into Red Badger with huge rewards in 2012. Vagrant together with Chef and Puppet have transformed how we think about provisioning platforms, both in the development environment and the cloud. Expect to hear a lot more about that from us on the blog soon.

The real-time web has also had a big impact on a number of projects we ran in 2012 with heavy use of both WebSockets and Server-sent Events (SSE) to create dynamic and constantly updated applications. Redis together with WebSockets/SSE are a match made in heaven.

I'm not sure I can get away with calling the Cloud “new” any more  but it was interesting to see that over the course of the year we’d had experience using most of the major big hitters in AWS, Azure, Rackspace and Heroku. We’ve always been heavily reliant on the cloud and still have no physical infrastructure of our own to speak of. All 4 of the Infrastructure/Platform as a Service offerings mentioned bring something slightly different to the table that we’ve leveraged across our various projects, but AWS has probably had the most usage with Azure and Rackspace usage tailing off.

In a word .Net. Whilst we've certainly delivered projects during 2012 using .Net and have a long history of doing so, but there’s no doubting that within our own little tech trend, the move has been away from MS tech towards that of open source. The reasons why are probably the subject of another blog post entirely, but given our mantra of “choosing the best technology for the job” - it would appear that open source has fulfilled that edict more often than not.

We've been so busy during 2012 that we haven’t done the best job of sharing the fruits of our labour with you, dear reader. Our new years resolution has been to remedy that and we’re kicking off the year with a cornucopia of blogs that cover our favourite tech of 2012 - so stay tuned!

In the meantime, you can peruse the the list of tech we used in 2012 in all it’s gory details (and in no particular order) below.