So it has been a little while since I last talked about the Firestarter event that I proposed and successfully ran on the 31st January, finally I have managed to get around to giving you a cheeky flavour of what it was like along with what did and didn't appear to work over the jam-packed two days. 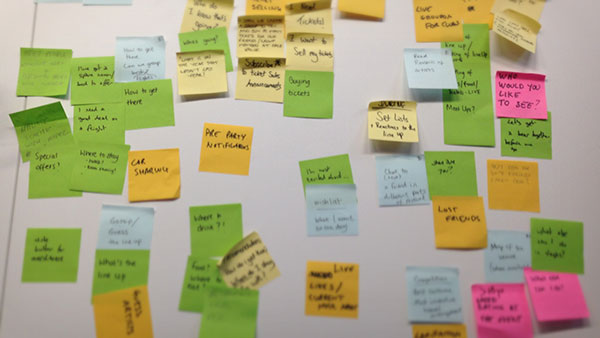 So day one, named "from conception to canvas".  The fridge was stocked, the beer was ready and everyone was wondering how and what the heck we were going to be doing.  I first did a small presentation to everyone explaining firstly what the scheme offers (see previous post for more information) and what was going to happen over the next two days.  Coming into the event I already had a strong idea of what product / application I wanted to produce.

With this in mind part of the presentation included me basically performing an elevator pitch to everyone...

The idea that I wanted to "ignite" (had to get a pun in there somewhere) using the Firestarter scheme was something that I came up with in the music festival and social media space.  The idea was formed from a need that I had when booking my recent tickets for the Electric Daisy Carnival in Las Vegas on the 21st, 22nd and 23rd June 2013.  Looking at Facebook and the buzz generally happening around events I felt there was a strong need for more focussed application in this area.

Allowing people to easily connect to others via hotels where other people were staying, pre-parties, car shares, check-ins and a whole gamut of other features that could form a great social platform for festival goers. 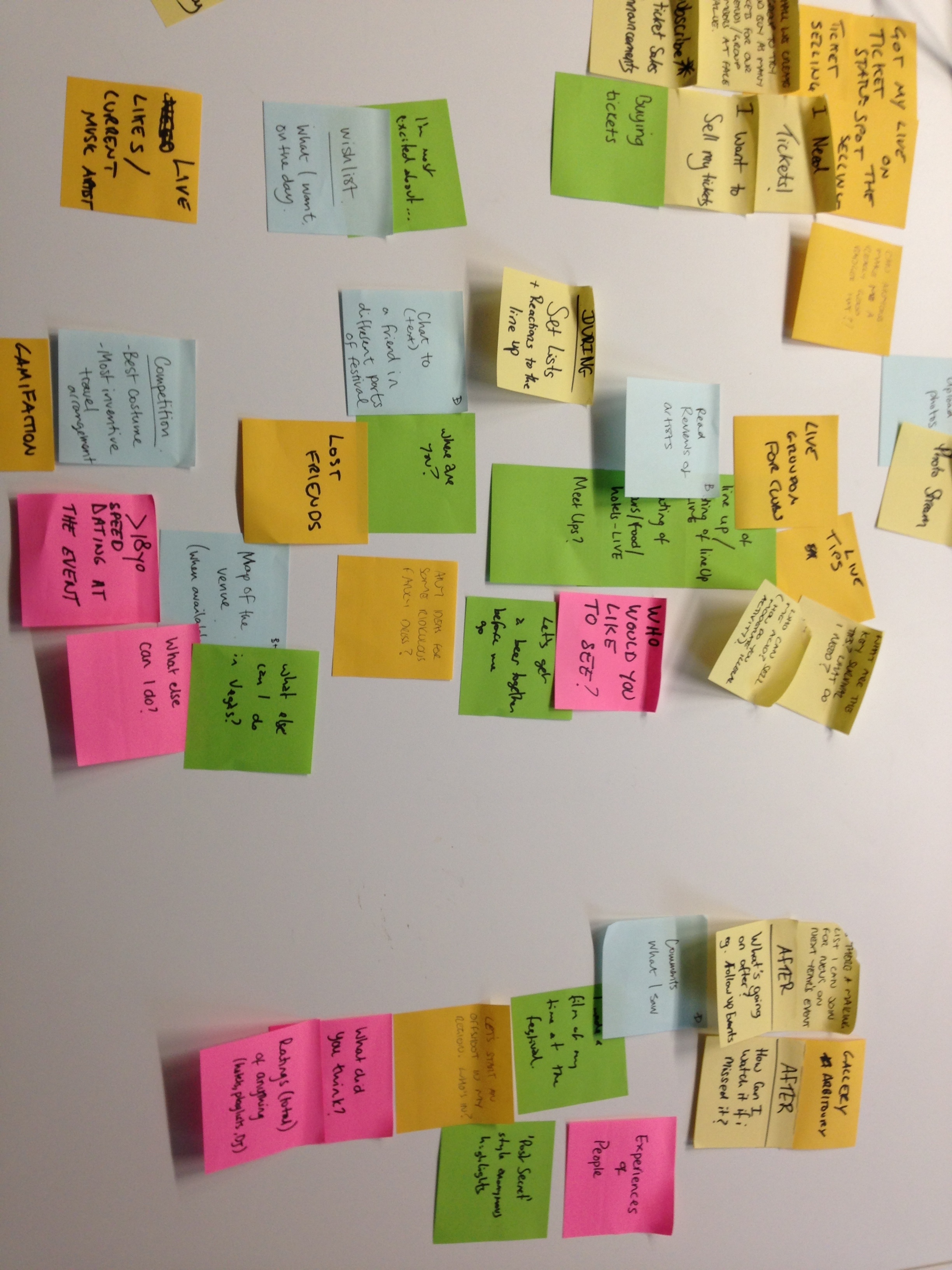 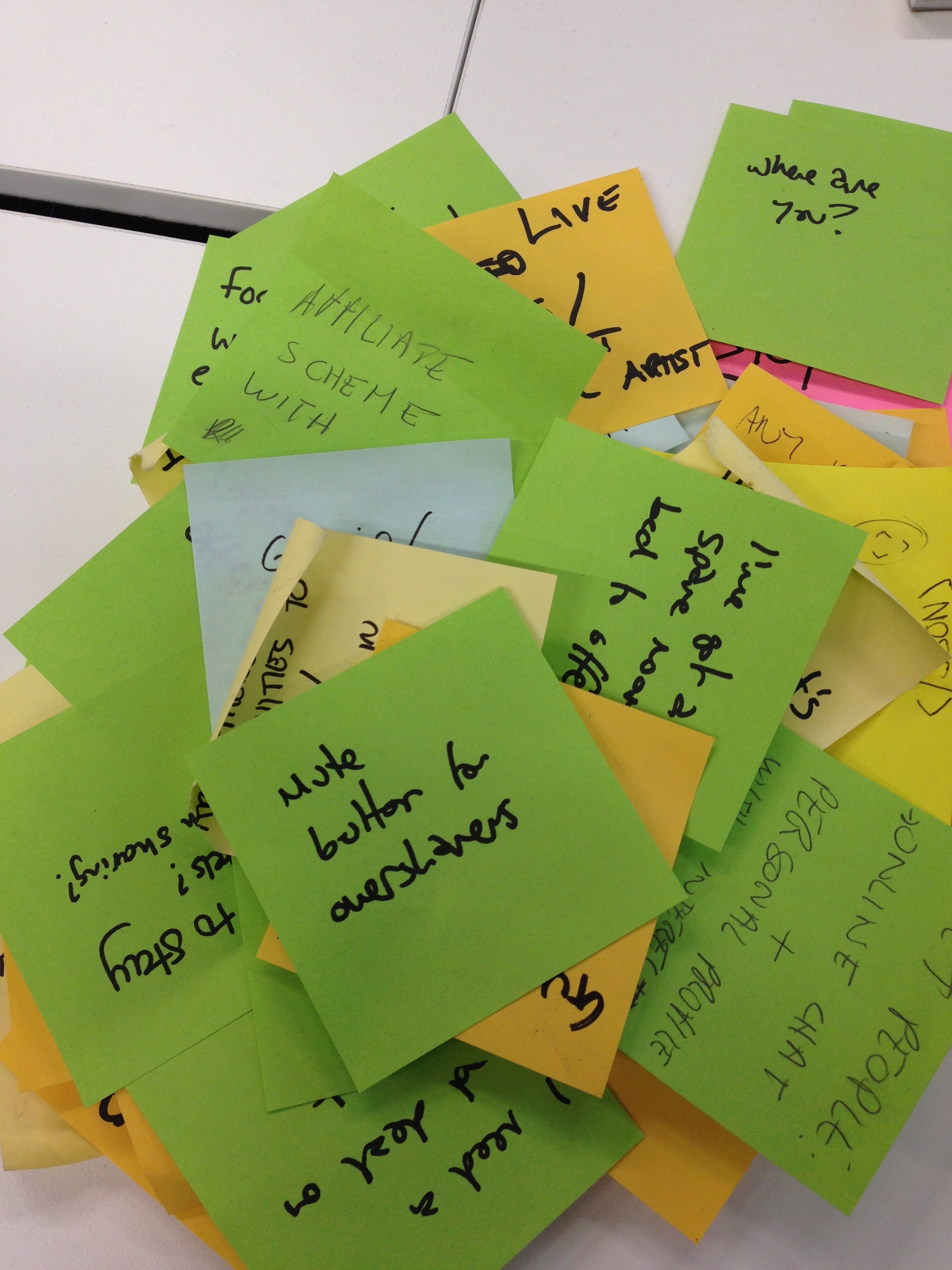 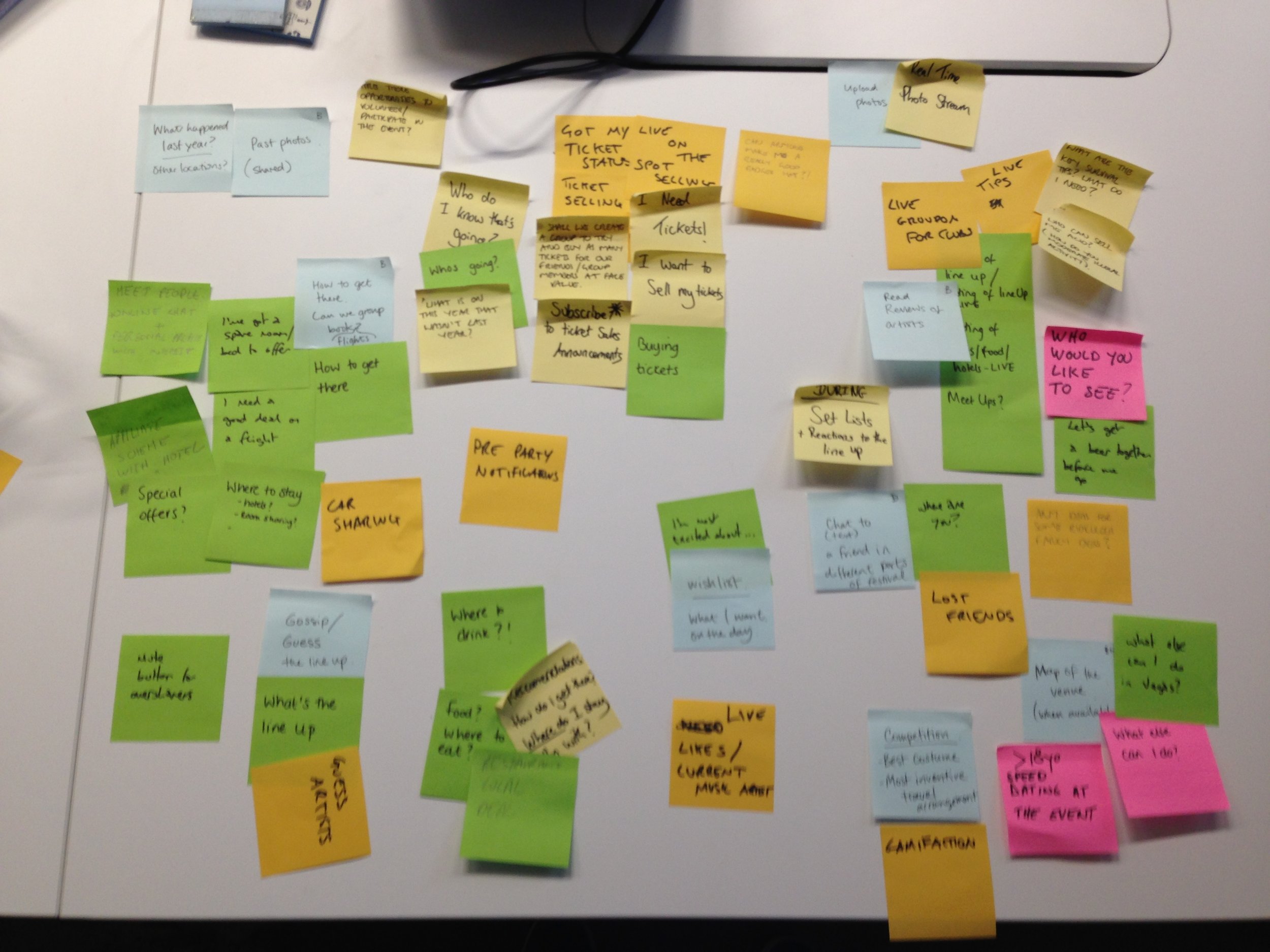 So at this point we are all on the same page of what the Firestarter scheme can provide the team if they had a product idea they wanted to develop.   Alongside this hopefully everyone now had a basic idea of the type of application we were going to hopefully build over the two days.

The first job we got to work on was to grab the old faithful post-it notes and sharpies to produce all the features we think could be a possible for each of the phases of a music festival and indeed what Grazr could become as a fully fledged application.  We (very pleasingly) underestimated the amount of ideas and we soon found ourselves having to find a new home on an office desk behind us instead of the wall brimming with fantastic ideas.  We have such a dynamic team in the office, those who were around and had some spare time just got involved with the day alongside those I had "officially" booked resource for.

The next step was to form the features that should become the "Minimum Viable Backlog" for the MVP.  We decided to produce the application specifically for the Electric Daisy Carnival event only.  This would allow us to test a small amount of users for the application (fail fast, fail cheaply, one of the Red Badger mantras) adding more events as we learn what users actual want (or don't).

To get to the specific features we wanted to tackle, everyone had a discussion and voted on the features / post-its that we thought would be most important to the user and viable to get completed in the time frame we had. 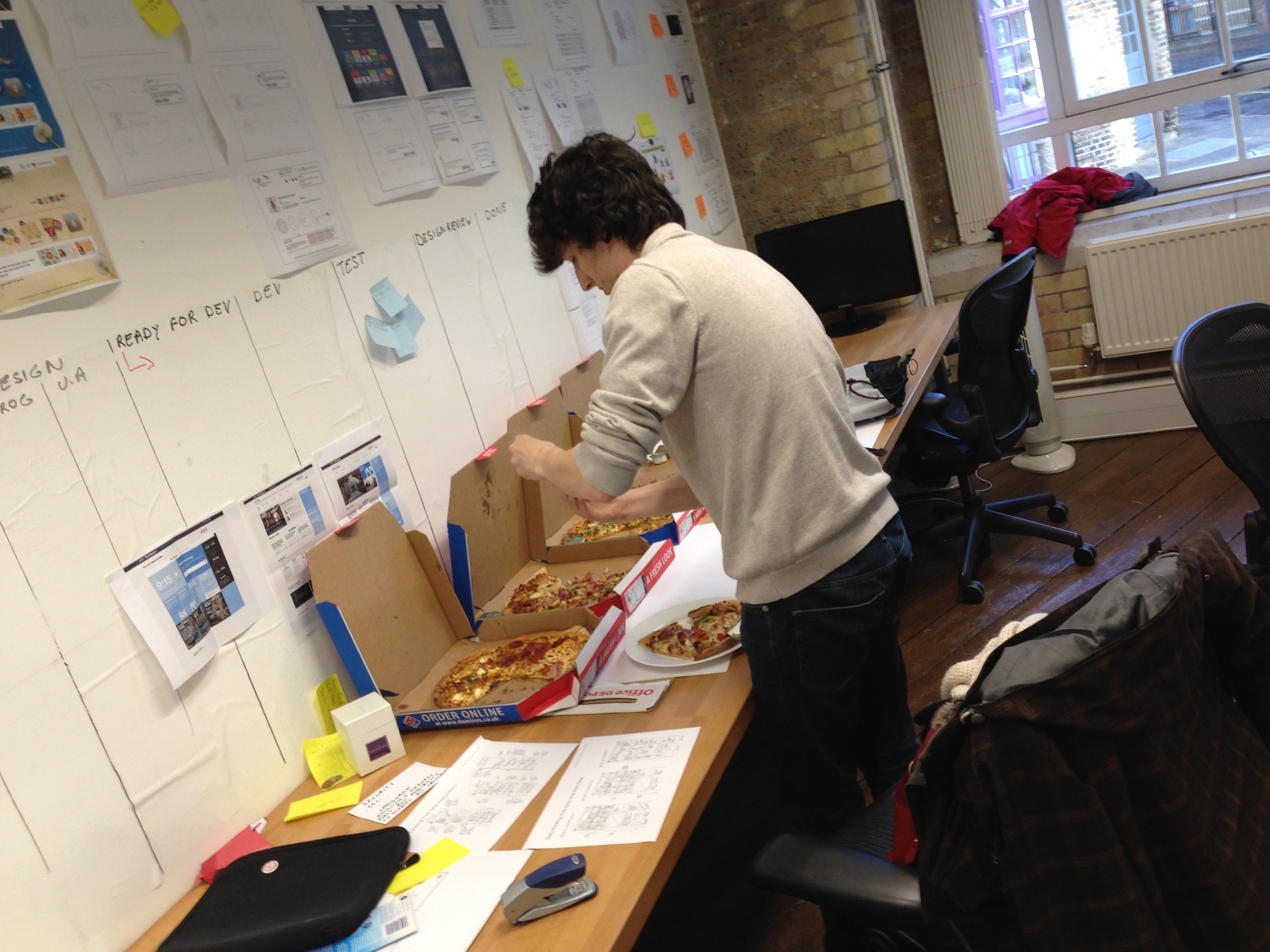 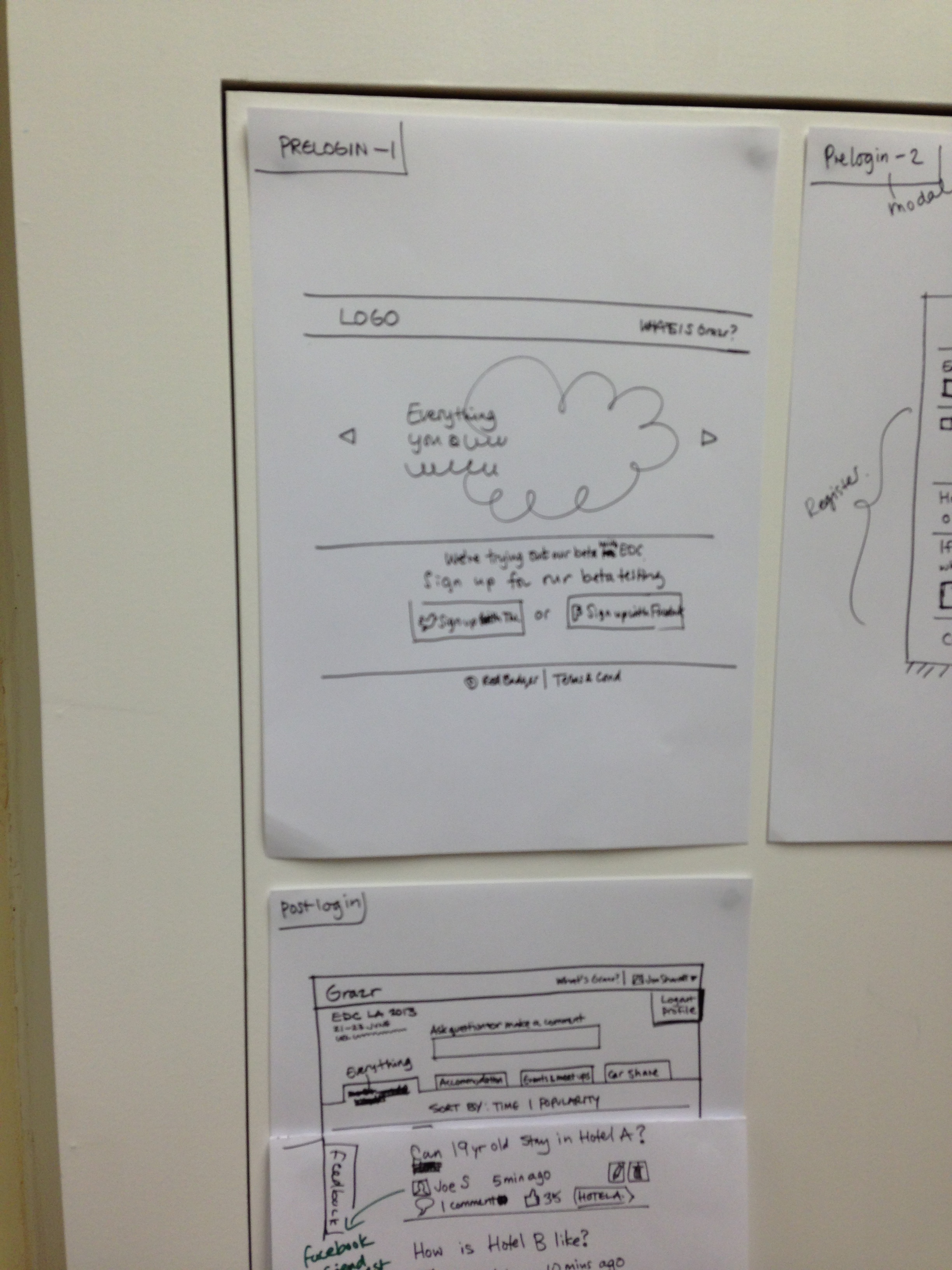 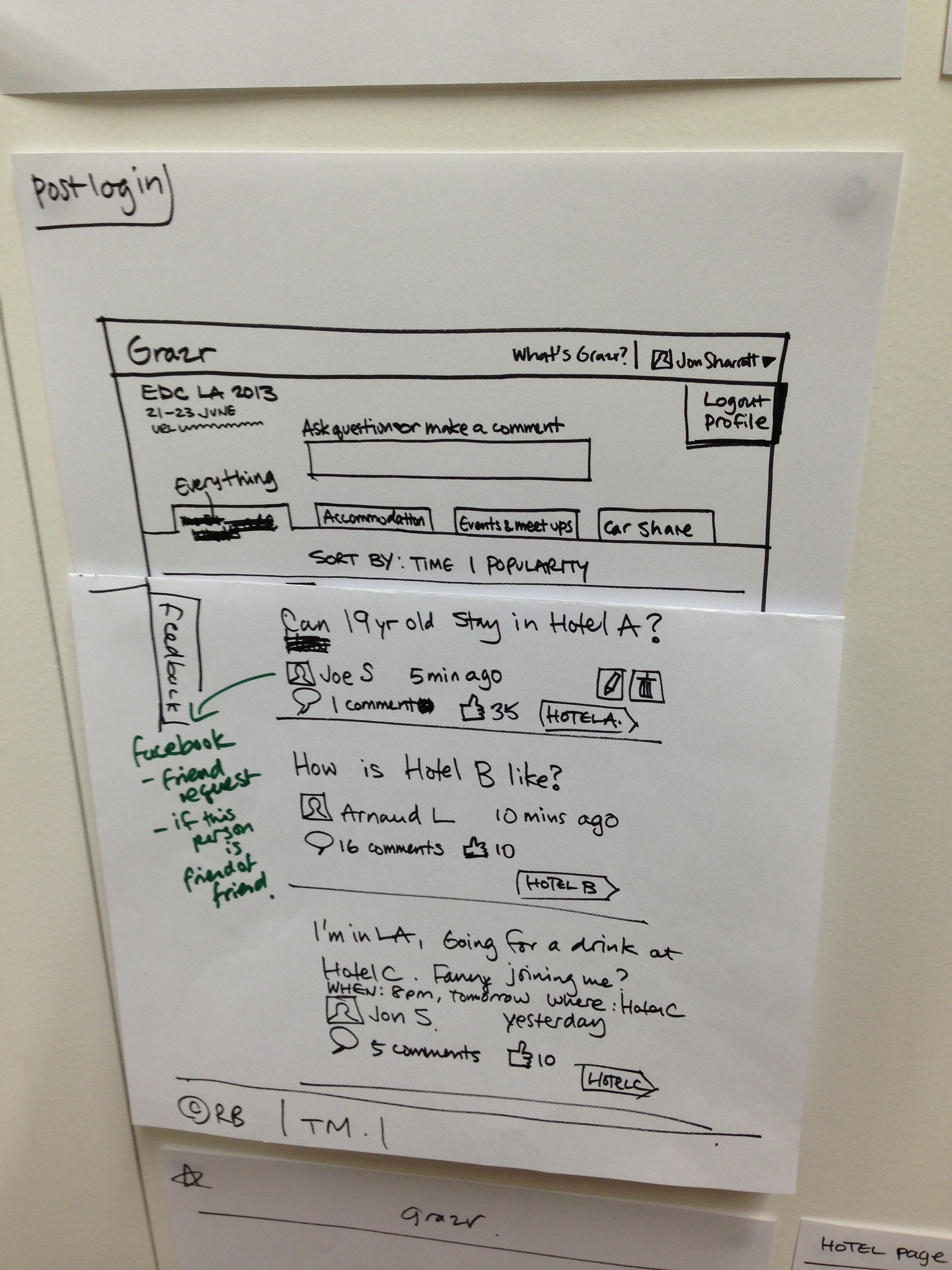 Building these features would allow us to gauge if there is indeed a need for Grazr as an application at all.  Towards mid-afternoon / the end of the day we had produced a minimum viable backlog and had a decent idea on what we needed to produce from creative / branding to UX for the features decided on.

The technical badgers got started producing a basic web front end using "bootstrap" as a basic framework for layout.  We all have a lot of experience with node.js from the awesome projects we have been working on here at Red Badger.  I did throw a bit of a spanner in the works by adding Backbone and Marionette into the mix (more on that in day two), but hey we all love a challenge so why not.  For a full list of tech that we use here at Red Badger checkout our tech page, it really gives a great insight to the skills we have on board here.

The combination of node.js and other tools such as bootstrap allowed us to get the basics up and running quickly whilst the UX and branding from Sari would start to take shape.  Day one came to a close and after copious amounts of sugar intake and pizza we were ready for day two.... "from canvas to conception" (the hard part, actually delivering something!).

I can safely say that day one felt like we were on the right track, UX under-way, name sorted, domain name registered along with technology chosen and a focussed set of features.  The summary of our hard work and efforts would be as follows:

UX:
Started based on the backlog produced.