I have attended the Thinking Digital conference 2013 in Gateshead for the first time this year, having read a review comparing it to TED. And all in all, I think it lived up to my expectations. One participant I met even told me that he preferred it over SXSW!

There were around 30 speakers packed into two days. I'd say 80% were absolutely fantastic - that's a pretty good hit rate.

Here are some ideas I found particularly interesting. I won't go into too much detail but have provided links for you to explore. I heard that the videos will become available in about 6 months time. Or you can watch the past talks on their site.

Be collaborative, be creative, be agile

This may sound a bit self-congratulatory, but I found that we're already implementing most of the 'best working practices' that the speakers were advocating. It was mainly about being collaborative, being creative and being agile.

Maria Giudice talked about being a DEO (Design Executive Officer). Aral Balkan talked about the need to put creative and user centred design thinking at the heart of business, showing many entertaining bad/evil user experience examples from the world around us - I was practically crying with laughter. 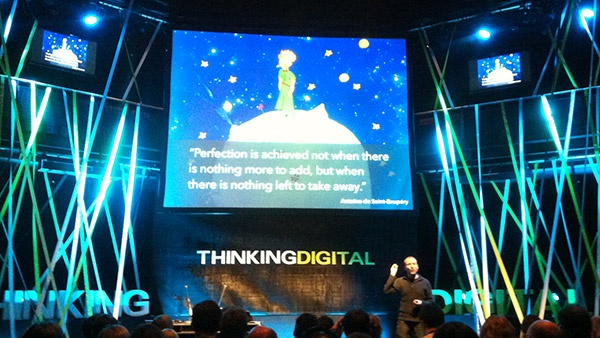 Mike Bracken showed how his team changed the government's perception of the web by using a more agile approach to their Gov.uk project. I was already impressed by their design principles and how they have actually managed to do it given that it IS a government project after all. Imagine the bureaucracy! During the talk, he shared a chart showing all government transactional services, and told us that they were understandably bringing the most popular services online first. The chart had a very, very long tail - the one at the end was 'To obtain permission to scatter ashes at sea' - so you know when that becomes available online, they've done it all!

There were many other speakers that touched on similar points. As I work in a company that works very collaboratively, creatively and in agile, it was great to hear that we're on the right track. And we're finding that it works for us.

Many speakers talked about how they wanted to inspire their kids and the next generations of technologists. And it struck a chord (or code) with me, as a mother and an auntie.

TeenTech was introduced by the one and only Maggie Philbin, (what would be the modern equivalent of Tomorrow's World?) bringing teenagers and experienced developers together to make something happen. Let's get them excited!

Sugata Mitra's Minimally Invasive Education (MIE) was also very inspiring. It is basically about creating a self-organised learning environment without teachers present (but you need grannies and a teacher posing the right questions). A group of kids are given one computer (with internet connection) to share, and a question to answer together. Say if you want to teach them 'cell differentiation', the question will be 'why can't women grow beards?'. A teacher is still very important as you'll need a right sort of questions. And a granny is important to give the kids some encouragement and positive feedback to keep them going. It is amazing to see how effective these approaches are.

There were two teachers, Jo Fothergill & Tara Taylor-Jorgensen from New Zealand, who talked about how they successfully used MIE to teach their pupils. Sugata himself is also setting up 7 schools (5 in India, 1 in Gateshead, 1 in Durham) to implement the approach. It will be interesting to see how they get on.

In a different talk, Julian Treasure was raising awareness of noise pollution. He said it was a serious problem, second only to air pollution, but no one was doing much about it. In a typical modern classroom, pupils that sit at the back of the room only catch 50% of what their teacher says because of bad acoustics. He also pointed out that playing music while you are studying definitely reduces efficiency as music are inherently created to be listened to, despite what teenagers claim!

Things are happening up North!

There were a few reminders that the North East has become the second largest tech industry after London. And that it's being happening largely under the radar. There is a good reason that the conference was taking place in Gateshead! I will definitely keep an eye on developments up there.

Above are just a few ideas I found particularly interesting. There were loads more thoughts discussed that were nothing short of amazing.

If there was any thread going through entire conference, it was probably humility. Think about users. Think about people. Think about emotion. Considering the name of the conference was 'Thinking Digital', it was very interesting that it was as much about 'Analogue' as 'Digital', as one of the speakers said.

And I can't wait for next year. I'll definitely be there.