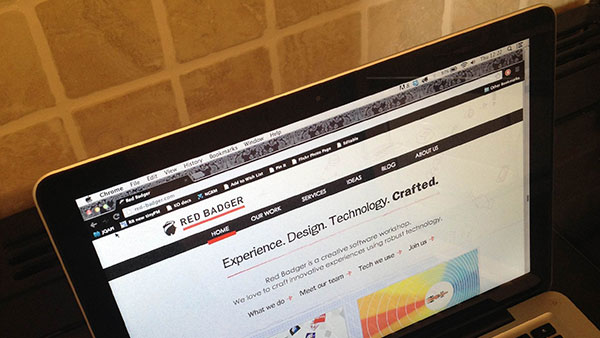 You know how it is - you set out to make “a few content changes” and end up with a whole new web site. We wanted to make a bit of an adjustment to the version 2 Red Badger site, launched in mid-2012, to give a better feel for who we are and what we can offer. In the end, it made more sense to go the whole way and create version 3. So here we are.

In the previous version of the site we used Wordpress to manage most content, but rather than use it to render every page we instead pulled content through its JSON API to feed a more flexible front-end built on Node and Express. This was fine in theory, but in practice performance wasn’t really as good as we’d hoped - even with some aggressive caching built in - and any kind of content beyond blog posts turned into a tangle of custom fields and plugins. Wordpress specialists would probably have an answer for all the problems we faced, but we felt it was time to strike out and try something different.

This also coincided with an interest in evaluating Docpad, a semi-static site generator built on Node. If you’re familiar with Jekyll on Ruby or Hammer for Mac its kinda like that, but as well as building purely static sites it can also run with an Express server to allow some dynamic behaviour where needed. We hacked on it for a couple of days, I rebuilt my personal site with it, and then liking what we saw we decided to proceed.

The principle of Docpad and other site generators is pretty simple. You have a folder of documents written in any supported format (we’re using Jade and Markdown), reflecting the desired URL structure of the site, a folder of templates, and a folder of static assets. The generator runs through the documents, compiling where needed, applying the templates, and saves them into an output directory along with a copy of the assets. Logic in the templates is responsible for constructing navigations and outputting collections of data - just as a dynamically rendered site would - but it only does it once. The theory being, your site only changes when you act to change the content, so why do you need to serve something other than flat files between those changes?

Docpad is light in its core form, but there’s a good plugin ecosystem to extend it. We’re using plugins to compile SASS, Markdown, Jade and Coffeescript, fetch RSS from Flickr using Feedr and serve pages with clean URLs rather than .html extensions (this is where the Express part comes in handy). We’ve also created a few of our own. The main one is to allow us to curate “featured” items in the meta data of any page - so if you look on the homepage, for example, all the content items below the masthead are manually set and can be changed and reordered simply by altering a list of relative URLs. We’re also using custom plugins to pull in Tweets and posts from the old Wordpress blog, and Docpad’s event system makes it easy to hook this data into the appropriate render step in the site’s generation.

For the time being we’re still using WP for our blog, recent posts are imported by the Docpad site on server start using a custom plugin in order to be able to feature them on the home and other pages, and list them on our team profiles. In the longer term we’re planning to move to blog itself on to Docpad as well, but that will need careful consideration to make sure all the functionality currently given by Wordpress plugins can be maintained (or improved!).

The previous iteration of the site was built using the Bootstrap CSS framework. My own views on that notwithstanding, some of the design changes we were planning meant it made sense to look again at our approach to the CSS.

As the site design created by Sari does not inherit from Bootstrap's design opinions, only a small subset of it - mainly the grid - had been relevant, and structurally with full-width background patterns on each section of a page it was easier to start over.

That’s not to say we’ve rejected it completely. In the new grid system we’re still using some of Bootstrap’s thinking, along with patterns adopted from Harry Roberts’ Inuit.css and Chris Coyier’s thoughts on minimal grids. So we haven’t really done anything earth-shakingly innovative, but we have found it to be a solid, responsive grid that - most importantly - we completely understand and can use again.

1 - ‘section’ element. Inherent 100% width. Top/bottom padding set, optional background texture applied by class, otherwise unstyled. The paper tear effect is added with the :after psuedo element.
2 - ‘div.container’. Width set to site default (920px) with left/right margin auto for centering. Any full width headings are placed directly inside this element.
3 - ‘div.row’. Unstyled except for negative left margin of default gutter width (40px) to compensate for grid element margin, :before and :after psuedo-elements set table display and clear as with Bootstrap.
4 - ‘div.grid’. Floated left, all .grid elements have a left margin of default gutter width (40px). Default width 100% with over-ride classes for column width, in the case above we use 'one-third'. Background texture classes can also be applied here.

We’ve switched from our regular LESS to SASS for this version of the site, again as a way to explore what it can do. With Docpad its as easy as swapping plugins and all the compilation is handled for you during site generations. Needless to say the site is responsive, with the grid gradually collapsing down to a single column view and elements such as the services carousels and case study quotes shifting layout subtly to suit smaller viewports. And to make sure corporate decision makers get a good experience we’ve also tested and fixed back to IE8.

The other final touch is that we chose to use a custom icon font for the various calls to action and other decorations around the site. We used Icomoon to generate it from our own vector artwork, and this has saved an enormous amount of time because you can colour the icons with CSS rather than cutting and spriting images for all the variants you might need. The adoption of icon fonts has had a few challenges, chief among them accessibility (screen readers tended to attempt to announce them) but with the technique of encoding icons as symbols, in the Private Use Area of the Unicode range, this problem is now largely overcome.

There were still a few things we found in the process of creating our icon font. It’s not advisable to do anything more complicated than just use them as icons, for example, as it’s very hard to align them perfectly to regular fonts without browser hacks. Each browser has a slightly different way to calculate and render line height. Also, depending on how much consideration you give to it, they’re not supported by Internet Explorer on Windows Phone 7 (although the symbols it uses instead are quite cute).

Of course a consultancy’s own web site is never really finished, as we’re always looking to show our capabilities and keep up with the latest thinking in a world of fast-moving technological change. And the cobbler’s boots syndrome also applies; its hard to find time to look after your own when you’re always busy helping clients deliver their own transformative projects.

But we feel like we’ve achieved a stable, maintainable new site and its time to put it out there. It feels much faster than the old one, and we've delivered the flexibility in content layout we set out to achieve. We wanted to make sure we were demonstrating our own best practices, and while a good deal of that is under the hood we’d be happy to talk through it in more detail if you’d like to get in touch.

There are tweaks to come, naturally, based on things we’ve already spotted and feedback we’ll no doubt get. One big task will be to make the site more editable for those of a non-technical nature. Its actually not too difficult, as most content pages are written in Markdown, but a nicer UI exposing that rather than the intricacies of Git pushes and deployments feels like a good next step. No doubt we’ll be blogging again to talk about that when the time comes.