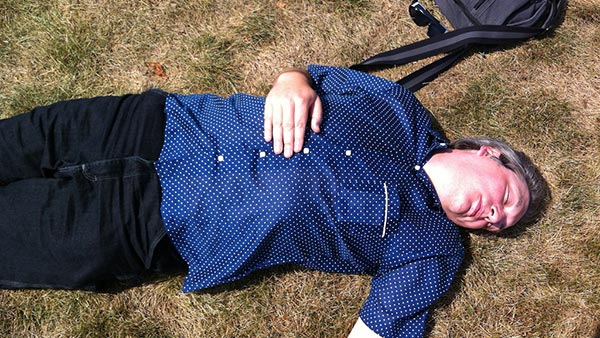 When assessing conferences for myself, I tend to break them down in to "doing conferences" and "thinking conferences". The former being skewed more towards picking up practical tips for day-to-day work and the latter being more thought provoking, bigger picture, 'I want to try that' kind of inspiration.

Despite being pitched as a tech-heavy event for Javascript developers, Remy and Julie Sharp's Full Frontal held at the wonderful Duke of Yorks cinema in Brighton has always felt like more of the latter. That's not to say the practical content isn't very good. It is, very very good, and naturally the balance has ebbed and flowed over the event's five year history, but the general feeling I get when I walk out at the end of the day is always 'Yeah, let's do more of that!' It's been that way right from the start, in 2009, when Simon Willison ditched his prepared talk at a few days notice to speak about a new language in its infancy - a little thing called Node. So I was hopeful that this year's conference would provoke similar enthusiasm.

High expectations, then, and a promising start with Angus Croll taking us through some of the new features in EcmaScript 6 (ES6), aka "the next version of Javascript". Presenting a series of common JS patterns as they currently are in ES5, and how they will be improved in ES6, Angus made the point that we should be trying this stuff out and experimenting with it, even before the specification is eventually finalised and brower support fully implemented, as David commented that if you've done Coffeescript you're probably well prepared for ES6, and really one of the aims of Coffeescript was to plug the gap and drive the evolution of the language, so its hopefully something I will be able to pick up fairly easily.

This was followed by Andrew Nesbitt, organiser of the recent Great British Node Conference, demonstrating the scope of hardware hacking that is now becoming possible using Javascript. As well as the now-obligatory attempt to crash a Node-controlled AR drone into the audience, Andrew also explained that "pretty much every bit of hardware you can plug into USB has a node module these days" and demonstrated a robotic rabbit food dispenser using the latest generation of Lego Mindstorms. Being able to use Javascript in hardware control really lowers the barrier to entry, and the talk only reinforced the feeling I got after the Node Conf that I need to try this (and ideally stop procrastinating and just get on with it).

Joe McCann of Mother New York gave a high-level view on how mobile is increasingly reshaping how we interact with the web, with the world and with each other. Use of phones as payment methods in Africa, where availability of bank accounts is challenging, has reached around 80% of the population with systems such as M-Pesa. And SMS, the bedrock of mobile network operators' revenue since the early 90s, is being disrupted by what are known as "over the top" messaging services that use devices' data connections. These are familiar to us as iMessage and Whatsapp, but also growing at a phenomenal scale in the far east with services such as Line which is offering payment, gaming and even embedded applications within its own platform. Joe's insight from a statistical point of view was fascinating, but it didn't really feel like many conclusions were drawn from the talk overall.

Andrew Grieve and Kenneth Auchenberg then got down to more development-focussed matters with their talks. The former, drawn from Andrew's experience working on mobile versions of Google's productivity apps, was a great explanation of the current state of mobile performance. It turns out that a lot of the things we often take for granted, such as trying to load Javascript as required, aren't as important now as perhaps they were a couple of years ago. Mobile devices are now able to parse JS and selectively execute it, so putting more effort in to minimising DOM repaints, using event delegation, and taking advantage of incremental results from XHR calls and progress events are likely to be better bets for improving performance.

Kenneth spoke about the web development workflow, a subject he blogged about earlier in the year. His premise was that the increasing complexity of browser-based debug tools, while helpful in their purpose, are only really fixing the symptoms of wider problems by adding more tools. We should be able to debug any browser in the environment of our choice, and he demonstrated this by showing early work on RemoteDebug which aims to make browsers and debuggers more interoperable - shown by debugging Firefox from Chrome's dev tools. By working together a community on projects like this we can continue to improve our workflows.

My brain, I have to admit, was fairly fried in the early afternoon after an epic burger for lunch from the barbeque guys at The World's End, a spit-and-sawdust boozer round the corner from the conference venue. So the finer points of Ana Tudor's talk on some of the more advanced effects you can do purely with CSS animation were lost to struggling grey matter. Suffice it to say, you can do some amazing stuff in only a few lines of CSS, in modern browser, and the adoption of SASS as a pre-processor with its functional abilities makes the process much easier. It's also brilliant that Ana came on-board as a speaker after impressing Remy in the JSBin birthday competition, and a perfect demonstration that participating in the web community can have a great pay off.

The last development-orientated session was from Angelina Fabbro, on Web Components and the Brick library. Web Components are a combination of new technologies which will allow us to define our own custom, reusable HTML elements to achieve specific purposes - for example a robust date-picker that is native to the page rather than relying on third party Javascript. This is naturally quite a large subject, and it felt like the talk only really skimmed the surface of it, but it was intriguing enough to make me want to dig further.

The finale of the day, and a great note to finish on, was Jeremy Keith speaking about "Time". Not really a talk on development, or at least not the nuts and bolts of it, but more of a musing about the permanence of the web (if indeed it will be so) interspersed with clips from Charles and Ray Eames' incredible short film, Powers of Ten - which if you haven't seen it is a sure-fire way to get some perspective on the size of your influence in the universe.

Definitely a thought-provoking end to the day. As someone who has done their time in, effectively, the advertising industry working on short-lived campaign sites that evaporate after a few months (coincidentally Jeremy mentioned that the average lifetime of a web page is 100 days) it has bothered me that a sizeable chunk of the work I've done is no longer visible to anyone. On the other hand I have worked on projects that have been around for a long time, and are likely to remain so, and I suppose in the end its up to each of us to focus our efforts and invest our time in the things that we ourselves consider worthwhile.

(Photo: Jeremy Keith recreating the opening scene of Powers of Ten on a visit to Chicago)