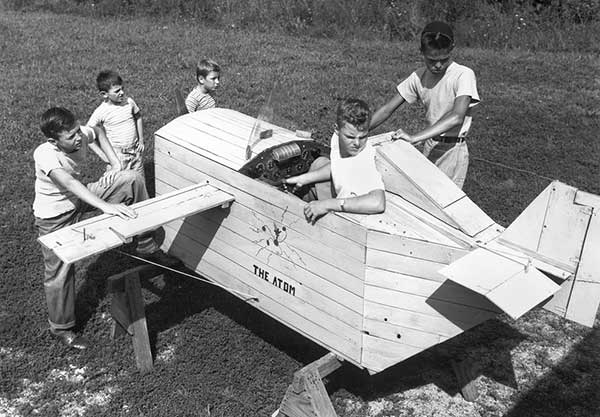 A Link Trainer, a type of flight simulator produced between the early 1930s and early 1950s, in Oak Ridge, in September of 1945. (Ed Westcott/DOE)

I awoke this morning to see my news feed filling up with articles on Facebook's latest $2billion acquisition of Oculus Rift.

Forms of Virtual Reality have been around for nearly 100 years already with early examples dating back to flight training simulators for pilots in the first world war. The commercial resurgence in popularity of this obscure medium is thanks, mainly, to the famous Oculus Rift Kickstarter project that sought initial funding of just $250,000. Virtual reality became a reality for bedroom developers and early adopter consumers alike.

Why it’s great for Virtual Reality?

Whatever your feelings are around the announcement (and of Facebook) the scale of investment made will mean the the people at Oculus Rift can get their heads down and focus on R&D without worrying about where their next round of funding is coming from.

This should mean technological advancement that will benefit everyone.

Often, technological advancement in this area is led by academia, government, aerospace and defense industries and until now the kind of people who could spend $2bn on the Research and Development of Virtual Reality were normally associated with large government organisations. For example, Obamas proposed DARPA budget for 2015 is a total of $2.9bn of which $334m dedicated to ICT related activities including various VR projects.

Compare that to the cash injection for the team at Oculus Rift ($400m) and we can start to see that, if allowed to experiment, they can use this as an opportunity to push the medium further than ever before and start looking at ways to make it accessible and useful across a wide variety of applications. Not just gaming and entertainment.

Opportunities in Virtual Reality for UX and visual designers?

As designers we need to understand the challenges of designing for Virtual Reality. Physical, Psychological and cognitive considerations will change the way designers solve problems and evaluate work.

There is no doubt that some of the original Oculus Rift champions will feel alienated by a move that sees it swallowed up by a social networking site but I think (and hope) we will see some very interesting and fairly rapid developments in this area now that are not centred around gaming. With a few companies starting to compete for market dominance including Valve and Sonys Project Morpheus awesome gaming applications are inevitable, however, Facebook is in a position to take advantage of their place as a global platform to explore and develop uses for Virtual Reality that are mainly seen in government or university research labs that reach beyond the social network.