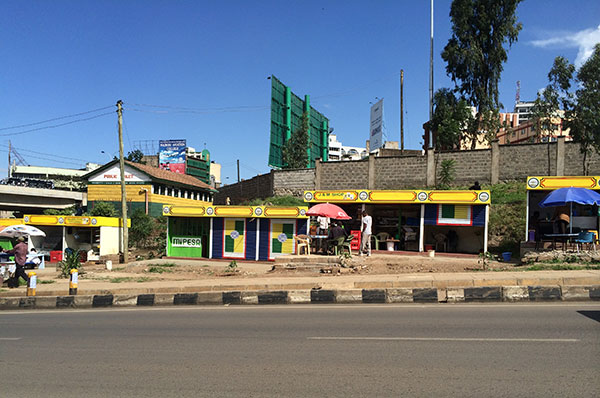 Smooth 8 hour flight with some surprisingly palatable morsels served up. They were, in reality, probably, disgusting! - augmented simply with the knowledge that I am soon to be humbled by an altogether less convenient way of life where food does not come from a magic box of tricks all warm and delicious, brought to you on a platter by a shiny person whose mission it is to leave you smiling.

While I’m waiting on the runway for my bus to take me to arrivals I get my wrists slapped by security for taking photos. Tourist moment.

Taxi driver tells me that everyone has at least 2 phones in Kenya because the coverage isn’t great. Safaricom works in places Airtel doesn’t and vice-versa. Of course because he is a business man it is essential for him to have two phones anyway.

Monkey Sunshine Green Tea. What is not to like about that? The coffee is awesome as well.

5 phones, check the charge and try to get on to the wifi network in the hotel to ensure the app is loaded up and ready. The hotel claims to have the fastest internet connection in Nairobi. Does not work at all in my room.

Move to main restaurant area to get 1.2Mbps down and 1.08Mbps up as of writing according to speedtest.net.

Met my first contact, a photo journalist and Haller person known for her work with NGOs in developing countries who promptly briefed me on what to expect before introducing me to her driver and 2 other chaps, the local minister for agriculture and a freelance journalist for the New York Times, who would be assisting me on my initial few days of research about 160km north of Nairobi, Karatina - the opposite direction to my 3rd destination, Mombasa.

One of those car journeys ensued - one where I was gawping out the window for the most part, where hours breezed by without a thought. 4 hours later and several stop offs in street side towns we arrived armed with our Safaricom sim cards and credit ready for an evening of preparation for (this) tuesday morning. Our first session in a makeshift usability lab somewhere off the beaten track.