The Launch of Badger Academy

Back in January this year I went away for a 10 day retreat. The initial intention was to get away from work completely. No phone. No internet. No work. However, unexpectedly it ended up being incredibly conducive to coming up with a whole plethora of creative ideas. Some were non-work related but lots of new ideas were very much work related. (See this blog post I have written on Founders Week: The Importance of Taking Time Out). One of these ideas, in its rawest form was how we can source and develop young talent and turn them into very highly skilled developers, designers, project managers or whatever else. This has resulted in the quiet launch of Badger Academy this week.

A little bit of context

At Red Badger, a huge amount of investment goes into recruitment. Finding the best talent out there is difficult. As a company we hang our hat on quality, quality being the #1 Red Badger defining principle. As a result, we’re very fussy when it comes to hiring people. This I am in no doubt, will hold us in great stead for the future, so we are determined to maintain our standards in staff acquisition. But it poses a problem - how do we scale the business to service our ever increasing demands from a rapidly growing sales pipeline, without reducing quality?

I think the answer is to improve our ability to develop from within. So, we are hatching plans to invest heavily in developing young talent to become senior leaders in their field. We realise this will take time but Badger Academy is the first experiment that we hope will fulfill the overall objectives.

A blueprint for success

In the summer of 2011 when we were a much, much smaller business, we put out a job ad for a summer intern. Out of the 60 or so applicants, one Joe Stanton stood out head and shoulders above the rest. By the time he joined us, he had just started his 2nd year of Uni so worked with us for 8 hours a week. He had bags of talent but obviously lacked experience and as a Computer Science degree student, was being taught vital foundational knowledge stuff that you’d expect from a Computer Science Degree. However, he had no knowledge of modern web application engineering practices such as Behaviour Driven Development.

At the time, we had much more time to spend with Joe to ensure that he was doing things properly and with our guidance and his astute intellect, he developed his knowledge rapidly. He then had a gap year with us during which he was deployed and billed on real projects before going back to part-time for his final year of University. He graduated this summer and after a bit of travelling around Europe, he joined us permanently. On his first day, he was deployed onto a project as a billable resource having had almost 3 years of industry experience. He has hit the ground running in a way that most graduates would not be able to.

Joe has been a resounding success. The problem is how you scale this to develop multiple interns especially now that as a company, our utilisation is much higher. We can no longer spare the senior resources to spend the sort of time we could with Joe at the very beginning. 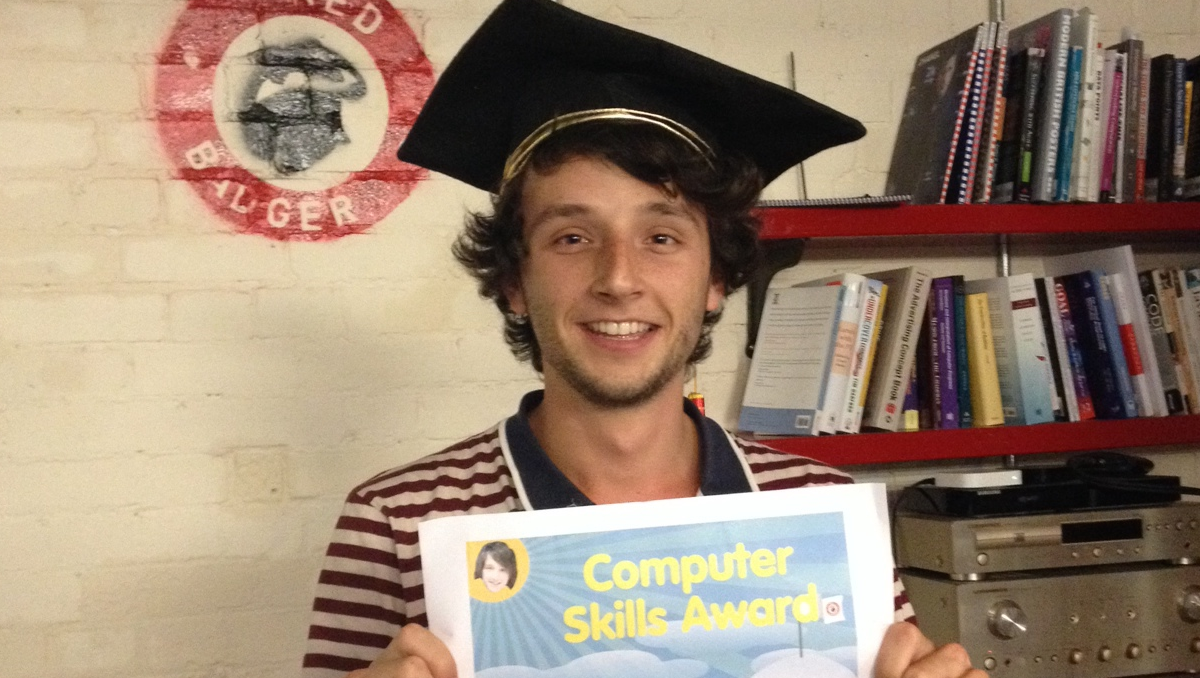 When I was at the aforementioned retreat, my ideas were based around a project that we were just kicking off for an incredible charity - The Haller Foundation. We were embarking on a journey to build a responsive mobile web application to help farmers in Kenya realise the potential of the soil beneath their feet (For more info, search our previous blogs and look out for more info once the Haller website is officially launched later this year). What was key in my thinking was that we had planned for a mixture of experience in the project team which included two intern software engineers (one being Joe Stanton) that were working 2 days a week whilst completing their final year at Uni. We were delivering the project for free (so Haller were getting a huge amount of benefit) and we were training and developing interns at the same time. Win-win.

So, this formed the basis of my initial idea - The Red Badger Charity Division. We would use interns to deliver projects on a pro-bono basis for registered charities only. The charity would need to understand that this is also a vehicle for education and thus would need to be lax on their timelines and we would develop interns through real world project experience in the meantime. Although a great idea, this wasn’t necessarily practical. In the end, the Haller project required some dedicated time from some senior resources and cost us over £20K internally to deliver. A great cause but not a sustainable loss to build a platform for nurturing talent upon.

So, over several months after my retreat (7 to be exact) in-between many other strategic plans that were being put in place at Red Badger, with the help of my colleagues, I developed the idea further and widened its horizons.

Rather than being focussed on just charity projects (charity projects will remain part of the remit of the Badger Academy), we opened the idea out to other internal product development ideas as well. We also put a bit of thinking into how we could ensure the juniors get enough coaching from senior resources to ensure they are being trained properly.

Badger Academy’s primary objective is to train interns that are still at University who will be working part-time with a view to them having a certain level of experience upon graduation and hopefully joining Red Badger’s ranks. However, it may also extend to juniors who have already graduated (as a means to fast tracking them to a full-time job), graduates from General Assembly or juniors who have decided not to go to University. 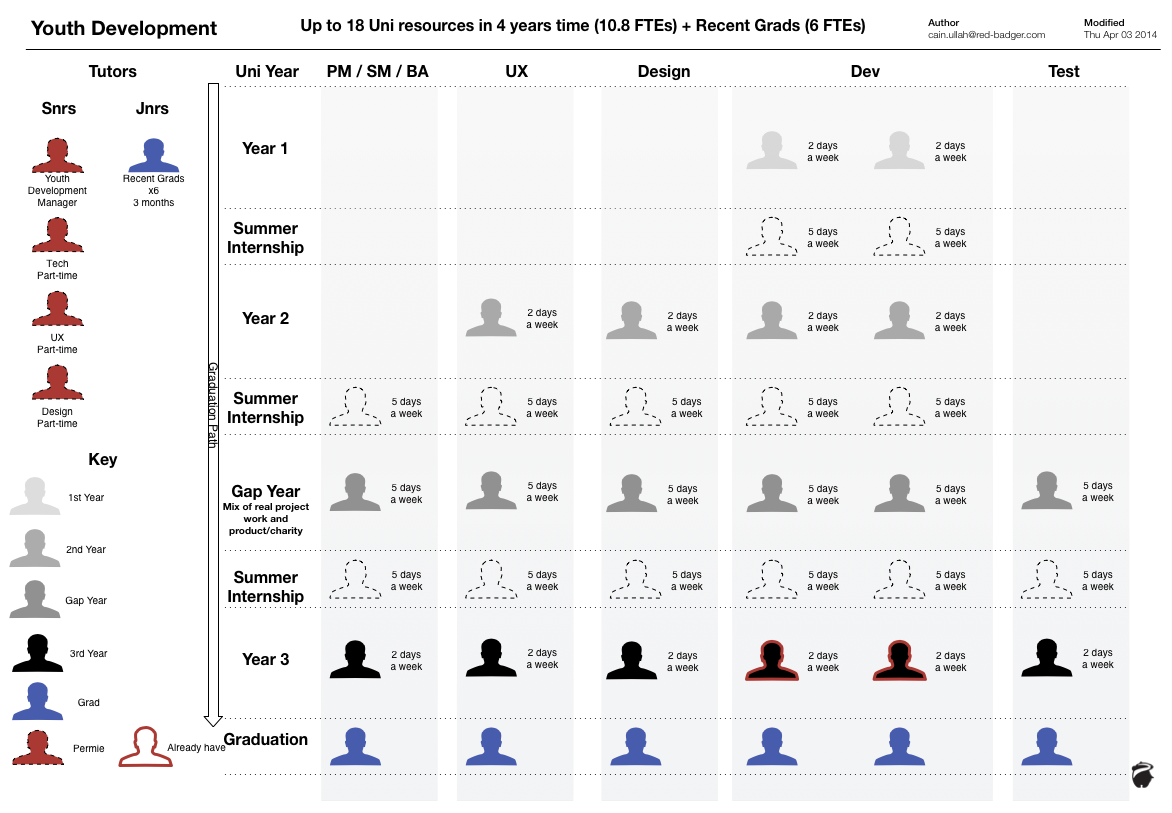 It will require some level of experience. i.e. We will not train people from scratch. But once Badger Academy has evolved, the level of experience  of participants will vary greatly. In the long term we envisage having a supply chain of interns that are 1st years, 2nd years, gap year students and 3rd years, all working at once.

Above is a diagram I drew back in April 2014 when initially developing the future strategy for Badger Academy. This has now been superseded and developed into a much more practical approach but the basic concept of where we want to get to still remains the same.

So what about the likes of General Assembly?

It is imperative that interns and juniors are trained by more senior resources. As a result we’ll be taking one senior resource for one day a week off of a billable project to dedicate their time to training the Badger Academy participants. To reduce impact on specific projects, we will rotate the senior coaches across multiple projects. We will also rotate by the three University terms. So for autumn term at Uni, we will have 3-4 senior coaches (all from separate projects) on weekly rotation until the end of the term. The spring term we will refresh the 3-4 coaches and again for the summer term. This way, everyone gets to teach, there is some consistency in tutors for the interns during term time and project impact is mitigated.

There will be a set syllabus of training topics for each discipline. As this is the first week, we have decided to build the syllabus as we go. Our current interns are both software engineers so we can imagine us getting pretty quickly into engineering practices such as testing strategy (E.g. BDD) but also other disciplines that are vital to delivering quality products such as Lean/Agile methodologies, devops and all of the other goodness that Red Badger practices daily.

This is an initial blog about our current activity but is light on detail. As this develops, we'll formalise the approach and publish more insightful information of what this actually entails.

What we need to not lose sight of, is that this is an innovation experiment. We need to learn from it, measure our success (as well as our failures) and adapt. This is part of a long term strategy and we are just at the beginning.

Disclaimer: Red Badger reserves the right to change the name from Badger Academy. This has not been well thought through!