It’s week 4 of Badger Academy, but for me personally as the 3rd intern to join, it’s the first week. Not only am I a few weeks behind on the Badger Time project, but fresh from the 3 month Web Development Immersive course at General Assembly, I’m also several years behind Tiago and Eric in terms of general programming experience. So my first few days were spent in a state of confusion and growing panic as I tried to read up on an ever-growing list of techniques and technologies that were completely new to me.

Vagrant, Docker, React.js, Gulp, Gherkin, Phantom.js, Browserify, Nginx, Selenium, and Circle CI were a few of the terms I was busy googling. I now have a rough grasp on what most of these are, and how they fit together but it might be a while before I can blog about them with any confidence! Watch this space ...

By Wednesday, I was able to get stuck in and start to write some proper code though, which felt good. I made a start on some tests for the API. We were thinking about using Cucumber for these, but in the end it was agreed that plain Rspec made more sense for the technical back end, and use the more English language readable Cucumber tests for the front end and potentially less techie readers.

Viktor was our senior developer this week, and spent time helping me write some tests for the JSON responses. He also helped refactor some of the React.js code on the front end while also giving me an overview of how it all fits together. This was really helpful, as I think I'm now beginning to understand React on a conceptual level ... we'll see how it goes when it comes to actually working with it though! 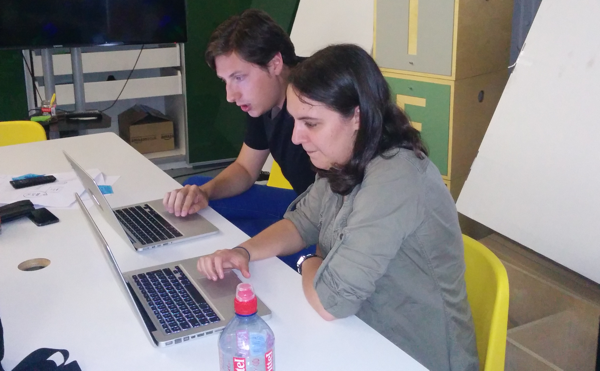 With 3 full-time team members plus 3 part-time senior devs on this project, having a standardised system for version control is important. Most of the projects I’ve worked on previously have been solo efforts, so it was crucial for me to understand the system in place and make sure I didn’t mess up. Luckily we’re using the Github Flow workflow, which is simple to pick up, and facilitates continuous deployment.

Create a new descriptive branch locally from master and commit regularly. Naming things descriptively is always tricky, but done right, it allows everyone to see who’s working on what.

Committing regularly allows you and others to keep track of your progress on the branch. Each commit is like a snapshot of the branch at a particular time, so you don't want to leave it too long between commits or too much will have changed. With regular commits of small chunks of code, if you introduce bugs or change your mind about something, you can rollback changes easily. (It's a bit like time travel!).

Once you are ready to merge to master, or want some feedback, open a pull request. Pull requests allow others to review your code, and everyone can add comments. Because Pull Requests accept Markdown syntax, you can even create tickboxes of things to be ticked off (top tip courtesy of Alex!).

Once a pull request has been opened, other people can see what you've been working on, and enter into discussion on Github about it.

Once you're happy with the code, and it passes all the tests, you can merge to Master. We have Circle CI set up to automatically test code once a Pull Request has been opened, so you can easily see whether the code is passing tests before you merge.

The golden rule of Github Flow is: Anything on the master branch is deployable.

Any code on the master branch has been tested and is totally stable. You can create new branches from it with confidence, and deploy from it. We don’t yet have any kind of production server set up, so there is currently no deployment. However, the whole point of Github Flow is continuous deployment, so once that’s up and running, this step will be implemented regularly.

To ensure that we learn as much as possible about all aspects of development, we're taking it in turns to work on the different parts of the project. So just as I was starting to get to grips with the API this week, next week I'll be doing something completely different and taking a turn on the front end. However, I'm looking forward to exploring React.js and seeing how the testing differs.