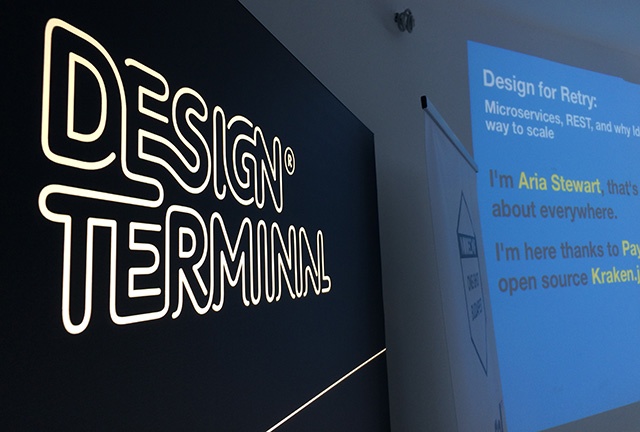 Suddenly, there is this moment in your life when you find yourself at the Node JS conference in Budapest. A one day single track event named One-Shot, with a bunch of speakers and a nice variety of topics, complemented with great Kenyan coffee and Hungarian craft beer. Organized by the local Javascript shop Rising Stack.

Some of the talks and slides are already available online, so I'll just go through some of those that I feel are worthy of your attention. 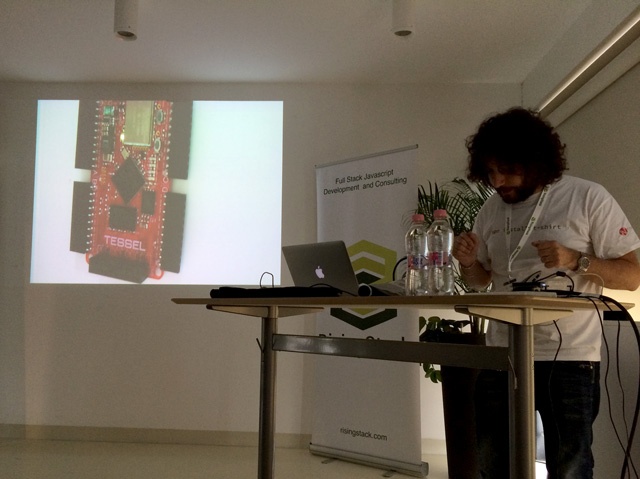 Matteo Collina did a rather brave demo of live hacking on a Tessel - a Node-compatible microcontroller with built-in wifi and a bunch of extension modules.

What's the first thing you do, when you get a shiny new microcontroller? Make it blink the light.

There are a bunch of npm modules compatible with Tessel, which makes it great fun to hack on the hardware and make it do various things for you. Like blinking lights in various fashions. As was expected, things didn't go smoothly, but Matteo managed to stay away from cursing and get things blinking (again).

Mathias Buus was venturing onto the p2p side of the internet. After a short introduction to the technology behind torrents, Mathias demonstrated how easy it is to implement your own torrent client with Node, and even stream video. But that was not enough - the next stop was infamous Docker with its (rather large) images. During the course of a spotless demo, Mathias managed to share a Docker image via torrent, stream it on another machine, boot it and launch things. If you'd decided to launch Node, it would torrent-stream all the necessary files for a proper launch, but nothing else. And yes, you can do this too - the thing is named Torrent Mount and allows you to mount a filesystem via torrent link.

Check his talk (Docker demo starts at around 15 min), and slides.

C J Silverio told a story of something we all take for granted most of the time - npmjs registry. How it all started as a small side CouchDB project and then miserably failed when the world suddenly start doing npm install way too often.

Watch how things evolved for npm, becoming faster and more reliable (or check out slides).

A full list of talks is available on the Rising Stack YouTube channel. Ok, here is another worthy talk - Design for Retry by Aria Stewart. She talks about something we all try to avoid - errors and how to design proper error handling in web apps.

Breaks were spiced by a special kind of cold brewed coffee, mixed with nitrogen. Yes, nitro powered coffee is a thing, and I'd love to taste it again next year.