It would be difficult for me to overstate the importance of launching a brand new version of an international e-commerce website. This was no mere reskin, we have been rebuilding the Fortnum & Mason website from the ground up. We started with the decision to use Spree Commerce for the storefront, and have been continuing all the way through to building them a bespoke CMS using our very own Colonel.

Because the Fortnum brand values customers above all, they felt it was of the utmost importance that the customers help drive the direction of the site. As a result, we decided it was important not to rush a release. We have spoken already about our approach to deployment, allowing us to deliver rapidly and regularly, but in order to get to that stage, we needed to be confident that the core of what we were delivering was sound.

The first thing that we had to do before we could make a plan, was to figure out where our weaknesses were. If we knew the elements that were most likely to fail, we could work pre-emptively to fix these areas before going live to the world. What has always been apparent to us is that with so many 3rd parties to rely on, no amount of automated or manual testing was going to truly expose our pain points.

So, as soon as the site was fully transactional, we made the decision to do a highly controlled soft launch prior to Christmas peak. A selection of Fortnum’s trusted customers were contacted, and given a password to our still very much unfinished site. By communicating to these customers, and making them a part of our development, we hoped to not just get a more robust test of our site. We also aimed to gain feedback from these key users which would inform the ongoing development.

And so the feedback came. However, it came slowly. Too slowly for our liking. So, further down the line towards the middle of January, we had a meeting with the team over at Fortnum. We came up with a plan to run both the old site and the new site in parallel, directing traffic in ever-increasing quantities to our site. So new.fortnumandmason.com was born.

The need to login to get access to the site was removed, and people started using our site. For the first time, we weren’t just inviting people to use the site, we were allowing them to get there on their own, initially via a marketing email, and later by directing a percentage of traffic from the old site to the new. In doing this, we were making sure that when the time came to release to 100% of the public we wouldn’t see the dip in sales and conversion that so often accompanies site re-launches.

Running two sites at the same time came with it’s own problems. There were moments when we wondered if we should have held off on introducing users to the new site, despite the fact that we knew releasing to customers early with the intention of learning from them was hugely important. However, how well it worked was undeniable. Major issues were uncovered, but instead of affecting hundreds of customers, it would affect one or two. If a couple of people encounter an issue, you can contact them personally and make sure they still feel of value. If hundreds, or even dozens of people are affected, it becomes a great deal harder. Also, if there were any issues that we needed more time to fix, it was very easy to direct all users back to the old site.

The 17th of February rolled around. This was the day we had all been waiting for. For the previous fortnight, around 40% of Fortnum and Mason users were being directed to new.fortnumandmason.com using the Qubit system to redirect them. We had encountered issues, some minor and some not so minor. We had managed to maintain our development momentum along with fixing these issues. Using Kanban, we had a clear view of work in progress and bugs that needed fixing urgently, all the while maintaining a focus on throughput - getting features shipped into live.

A part of everyone was waiting for the other shoe to drop, for complaints to start flooding in or for orders to start failing. A bigger part of us knew that our gentle filter of customers over the previous weeks and months had prepared us well for this. Of course there were still small issues, a customer struggling to pay here, a missing product there, but overall there were no alarming issues. 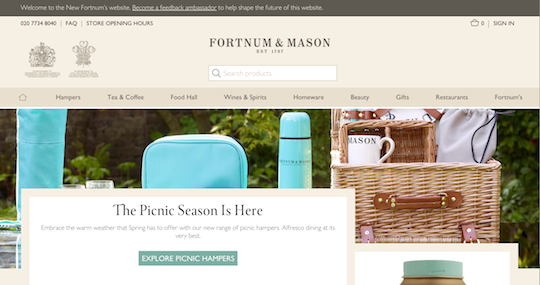 As the website bedded in over the next couple of weeks, we continued to see minimal issues and an increasingly positive impact. We have already seen an overall growth of 89% year on year, with the conversion increase coming in at an impressive 20% up. We have also seen an 18% reduction in customer service calls, with a particular drop in calls related to issues with payment.

As we finish up our first couple of months being fully live, the mood across Red Badger, and across the business at Fortnum, has been hugely positive. We are immensely proud of what we have achieved, and we don’t feel that we could have had such a successful release if we hadn’t ramped up slowly in the way that we did.

We are looking for a great Agile Project Manager to join Red Badger- if we sound like the kind of place you'd like to work drop us an email jobs@red-badger.com - we'd love to hear from you!