What I Learned about the Future of Internet From Fluent Conference 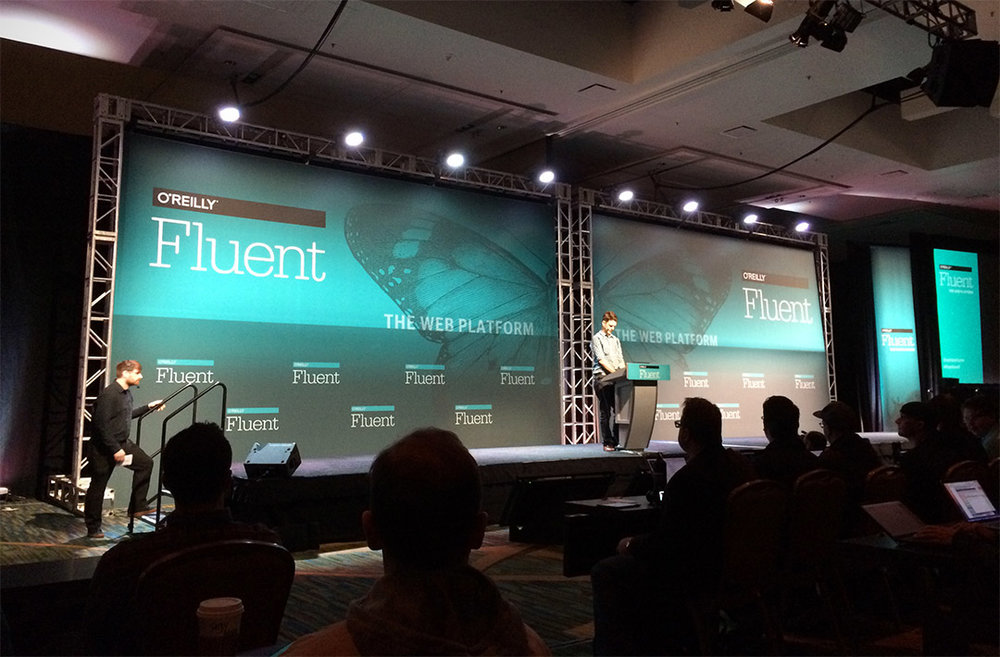 By the year 2015 I imagined the internet to be something close to how it was envisioned in Gabriele Salvatores’ Nirvana cyberpunk film. You’d plug yourself into cerebral cortex, put VR goggles on and off you would go flying into the cyberspace.

Funnily enough, there was a glimpse of that during the recent O’Reilly Fluent conference in San Francisco. But all things in order.

Fluent isn’t a conference to attend if you want to get deep knowledge on a certain subject. 30 min long sessions are great to get a drive through the topic, to give you understanding on what it is. What Fluent is perfect at is to give you broad overview on stuff you had no idea about. 5 simultaneous tracks of talks, one extra track of meetups, one more for workshops and as a bonus there is ongoing exhibition hall with companies and live demos of hardware and software.

There is optional extra day for just workshops - which actually was good for getting deep into a subject. We went full contact with ES6/7 new features, intricate details on type coercion in Javascript, and did a good session on mobile web performance with Max Firt.

O’Reilly also brought some heavy weight keynote speakers. Paul Irish (creator of HTML5 boilerplate and Chrome web tools dev), Brendan Eich (creator of Javascript), Eric Meyer (author of pretty much every book on CSS), Andreas Gal (CTO at Mozilla) among others delivered a comprehensive overview on where we’re now and what to expect in a next few years. I’m going to cover a few interesting trends spotted during the conference.

Rise of the transpilers

This was mentioned directly and indirectly during many talks, including creator of JavaScript himself. Future of Javascript is not meant for humans, but instead a something you’re compiling into. Many new features in ES6 and 7 should make this easier for compilers. If you had any doubts so far on things like LiveScript, ClojureScript or even Babel, it’s time to stop worrying and start implementing transpilation into your build pipeline. Especially since Babel might as well become a language on its own.

In all the honesty I missed all React related talks during the conference, of which there were quite a few. Later catching up with other attendees I got my confirmation that all of the talks were indeed mostly of introduction into React, Flux and ways of injecting React into your app. What was interesting is that each time I’d mention React and Red Badger working with React for the past year and a half, I’d become centre of attention, with people asking questions on how we do things. After describing our (now pretty much standard) setup with apps being isomorphic, hot components reload in place, immutables for state handling and ability to deliver app to no-JS clients, people would often say that Red Badger lives on a cutting edge. I couldn’t agree more.

Many people would also ask - how come it’s year and a half already - isn’t React just being released? The important part here is that lots of people are hearing about React now for the first time, and are really excited.

Eric Meyer made a great point during his keynote dropping a (deliberately) controversial slide that Web is not a platform. Right now lots of web developers assume JavaScript support as a given on any client. This is something Eric tried to address. Web is not a platform, there are and will be lots of clients with support (or lack of) for any sort of tech stack. When you take CSS off the webpage, it suppose to stay functional and content should still be human readable. Same goes for JavaScript, and any other tech we might introduce in the future. Assuming that you are targeting a broad audience, it’s always a great idea to implement your app isomorphically, with gradual degradation of user experience, in case client doesn’t support some of the tech we’re relying upon.

All of this goes very well with the React and what we’re currently doing with it. If you have modern device, browser and JavaScript support, you’ll get single page app experience, with ajax, client side routing and visual effects. If not, we’ll gracefully degrade to the server side rendering - which will actually improve performance on older mobile browsers instead of forcing JavaScript on them.

Importance of the progressive enhancement was echoed by @obiwankimberly during her talk on second World Wide Web browser and CERN’s efforts to revive it. Line Mode Browser was the first browser ported to all operating systems, and was used by many people around the world. Most of us might not consume web in text only mode anymore, but the idea of progressive enhancement goes all the way to accessibility, screen readers, and those people who rely on text-only representation of the Web.

Or simply H/2. Not only the spec is finished, H/2 (in its SPDY incarnation) is supported in 80% of all modern browsers.

For the transition period you can setup your web server to fallback to HTTP/1 in case client is not ready for new hotness. IIS doesn’t support H/2 at all, but there’s nothing stopping you from getting Nginx proxy in front of it with full support for H/2.

Why H/2 is important? Few things:

It seems that people at Mozilla are sharing my passion to see Internet with users immersed into it. If you have Oculus Rift and latest Firefox nightly, you’re all set to check out something they call WebVR. Idea is simple - WebGL graphics rendered by the browser into your virtual reality goggles, as well as you being able to look around and interact with the experience.

To boldly go where no man has gone before.

On the second day of exhibition they enhanced the VR experience by sticking LeapMotion sensor with tape on the front of Oculus, which allowed people to see their hands and fingers inside the simulation. That’s something that makes experience truly immersive - we like to move our hands around and seeing them interacting with stuff.

Another possible use for such technology is spherical panorama viewing, be it still picture or video. YouTube already supports such experiments, and one can only imagine this expanding in the future. I believe Mozilla VR department is spot-on about VR experiences delivered with the browser. There are still lots of questions, most of VR territory is completely unknown (UX in WebVR, anyone?), but it feels truly exciting to live during times when such things are coming to life.

This whole IoT concept was pretty abstract to me, until IBM did a live on-stage demo of a cloud based AI overlord, speaking in a nice voice and doing neat tricks.

I can monitor and command your devices. Typically I monitor vehicle fleets, cool things like power boats, medical devices, and perform real time analytics on information as well as historical data storage and visualisation. I can see you’re wearing heart monitor today. - Sarah, the AI overlord.

During a very short keynote by Stewart Nickolas he let Bluemix cloud based app to scan the room for controllable devices and sensors, and then asked Sarah the App to take control over one of the robotic spheres on stage that she discovered. Interesting part starts where you can imagine Sarah taking over fleets of vehicles, smart sensors and making decisions for us, humans. IBM is building a platform to unleash apps out of cloud into the real world.

Fluent was by far the biggest and extremely well organised conference I ever attended. Here are a few observation on how they did things.

All keynote videos are now available on O’Reilly YouTube channel. Few of my personal favourites would be:

I also compiled a video for the whole San Francisco trip - was my first time in California after all.