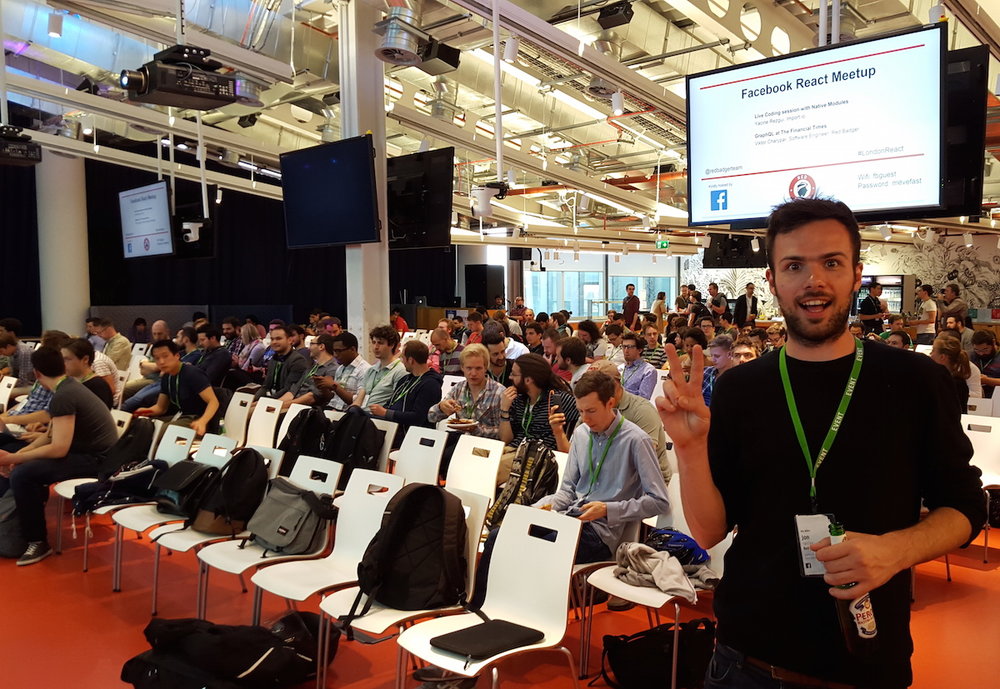 August brought us together for another meetup in Facebook’s fancy Euston offices last Tuesday, and that meant another opportunity for the React community to get together for a few beers, a bit of pizza and some exciting tech chat. The evening followed a slightly different format this month with two longer talks presented by Yacine and Viktor covering two cutting-edge topics:

Yacine’s coding session displayed the ease with which React Native can be used to develop an iOS application and also how seamless it is to employ ObjectiveC modules within the JavaScript. He even went down the risky route of coding it live and got a sound recording demo out of it!

React Native is an exciting prospect for anyone with React experience put off by having to learn a whole new platform to develop for when looking to build a mobile application. It offers all of the performance of a native app along with all of the familiarity of React during development, and the iOS module bridge makes importing native ObjectiveC code easy.  If this post by Facebook from March is anything to go by, an Android implementation is on its way very soon too.

At this rate we could be seeing cross-platform, reusable React components being used to develop both iOS and Android applications in parallel with desktop user interfaces. The speed with which Yacine put together a mobile application showed off one of the biggest draws to the framework and hopefully this will encourage a few React developers looking for something new to play around with to give it a shot.

React isn’t the only technology developed by Facebook that we’re enthusiastic about at Red Badger. Viktor’s talk this month was about bringing GraphQL into production at the Financial Times using the graphql-js reference implementation plus the benefits and costs that were brought with it.

GraphQL has been receiving a lot of attention from us recently. It aims to centralise how data is retrieved from services such as REST APIs or databases in a way that is totally agnostic to your backend setup. You simply pass a query to your GraphQL server and it will go off and find the data that you've requested. Once it’s found it, it'll be returned in the format specified by your schema. This happens to fix a few problems associated with RESTful architectures along the way like the need to make multiple requests to retrieve complex data types. You only need to make a single query describing the data you require and the server will handle the rest.

While it’s still early days for the project (the public introduction to it was only posted back in May, it's been used internally at Facebook for a few years though), Viktor already being able to show it off in production is a testament to how useful a tool it is. A working draft spec documents the language if you’d like to start working on an implementation yourself.

Judging by the positive tweets popping up afterwards, Viktor’s demonstration of the project looks like it has introduced a whole new crowd of people to GraphQL. If you want to take a look at how it’s used within the Financial Times, their code is open source.

Once again, a huge thank you to Facebook for letting us borrow their offices for the evening and also to everyone that attended. For all the latest meetup-related news, don’t forget to follow us over at @londonreact on Twitter. When it’s time for us to get together again, head on over to the London React Meetup page to get your tickets and we hope to see you next month!