TestExpo 2015: fragments of a dream

Too often in my career I have found that testing is exactly like water, gravity or Google: you don’t realise how important it is to your life, until you suddenly lose it for some reason. But to the people behind the yearly TestExpo conference, testing does seem to be everything – they dream of a world in which time and money doesn’t matter, testing is done for the sake of perfecting quality, and it’s more an art than a barely acknowledged necessity. Which is quite far from reality, so the conference was subtitled “We have a testing dream”, hence the title of this post (no, I’m not nearly that poetic on my own).

Honestly, I don’t have a testing dream. I have a nightmare though, one that I lived through, crafted by Morpheus’s darkest testing environments and emotionally scarring choices of software. What got me through those times was the idea that testing is precious, amazing and artful, and can be a continuously interesting experience. So I was really hoping to get in touch with my testing dream at TestExpo, and did my best to write up the ideas and tidbits that stuck in my mind after the talks. 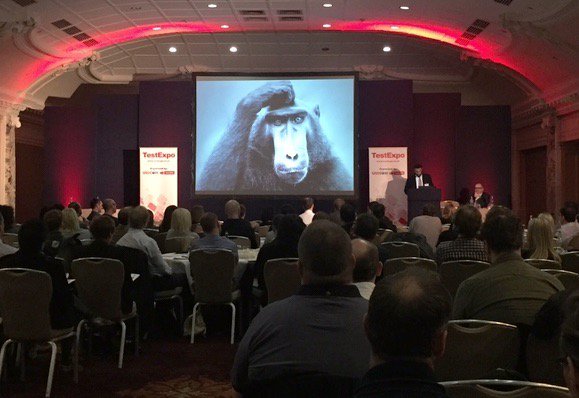 So what did I walk away with at the end of a day spent surrounded by the dreamers of the UK’s testing professionals?

The dawn of DevOps testers.I’ve seen people break down in a fit of rage when someone refers to themselves as a “DevOps developer” or anything like that. Yeah, DevOps is a culture, not a set of tools or titles, but it leads to a certain way of working and organising tasks, which does affect the way we do our testing. At huge companies like IBM, according to Glyn Rhodes, there is an emerging new role which differs from both the Traditional Tester (manual) and Technical Tester (automated) roles, and involves tasks that incorporate a new way of thinking about practices and policies in a DevOps enabled environment. In any case, that’s a new label on Linkedin we should look out for.

Agile is still a hip new thing. You’d think DevOps is the new Agile, that is, a fancy buzzword that sells tickets and ushers in the interest of every manager leading a development team. But it turns out, Agile is still something that some bigger companies struggle with! As natural and effective as it feels to startuppers and the younger generation of software craftsmen, corporate environments take ages to change, even if that change is for the better. So while you might want to forget (or rather never look up) what Waterfall means, you should still not take Agile for granted. Consider it a gift that keeps on giving.

It’s not just you, mobile testing sucks. No one who ever looks around the tube on a crowded Tuesday morning is surprised if I say, there’s a myriad of different devices actively on the market, with differing hardware capabilities, screen sizes and diversely crappy OSes. If you take into account all variables, like the device itself, the browser in use, the OS version and everything else, you can easily end up with almost 19.000 different setups showing up in your metrics in just a year! Which is horrifying. But comfortingly, Christian Breitwieser, the specialist talking about his experiences with the Sisyphean task of mobile testing, shed some useful insight and made us all feel a bit better about sometimes being lost in the midst of rounded screens, JS disabled browsers and misbehaving Samsung phones.

Roundtable discussions. They are apparently very useful! Also, they’re not for me. It’s a personal thing, on some days I just don’t feel like talking to people... And it was one of those days.

Us testers are not special. Nah, of course you are! But when it comes to the trends and challenges of our path, we are not that far from developers. Though our daily tasks differ, newly introduced methodologies and swiftly evolving technologies not only affect the way software is developed, but also how it’s tested. The closer you work with automated tests, the more apparent it becomes - learning to use new tools, getting familiar with the trendy languages, wrapping your head around the changing requirements is a challenge you share with your more development-inclined peers. In fact, it’s getting increasingly hard to even separate these two roles, mostly because of my next point, which is:

Automated testing is on the rise.You think it’s self-evident, right? Not really. There’s still a general attitude towards testing that it should strictly be a manual, purely user-mimicking chore, and that anyone diverging from clicking through a UI is mostly just a developer in disguise. But automation is gaining momentum and recognition in the consumer facing world. Partly because of the sheer volume of work that mobile testing entails, but mostly because it really is a practical and powerful addition to the irreplaceable manual testing. We now have more tools and means to carry out automation than ever, and even the slowest moving corporations are starting to see the value in automation teams, which makes me really happy, for a number of reasons. But that might become a blogpost of its own in the future.

And that’s all the fragments I can remember of the dream shared at TestExpo 2015. Here’s to another great year of testing!

Do you have a testing dream, or a living nightmare you'd like to escape? We are hiring! Come join us in making the world a better place testing and breaking software!