It’s been one month since I have started wearing the Apple Watch. From the outset I was a sceptic; my general lack of faith stemmed from seeing a former colleague use the watch on a phone call. Awkwardly speaking in to the device, he would frantically raise his wrist to his ear for the response. It wasn’t that he just looked completely ridiculous, but I couldn’t see the sense or value in it, and it left me with a rather cynical thought;

Could it be that new technologies are actually regressing our forms of communication all in the name of progress?

Sure enough, the appeal and abilities of the Apple Watch extend far beyond replacing the phone for conversation, and with an open mind I explore how it might improve my everyday life. I’ve been wearing the 38mm sized version, the smaller of the two options available. Aesthetically, the face looks stylish, although I can't say the same for the white silicon strap. The screen is high quality, colours are sharp and text is crisp on the small scale, partly thanks to San Francisco, Apple's new typeface. To navigate, the digital crown is an intuitive tool, a clever nod to its mechanical predecessors.

The screen is activated as you turn your wrist to face you, and you can customise how simple or complicated you want the watch face to appear. Swiping up from the main screen activates a dashboard, which summarises ‘glances’ - top-line stats or feeds from my selected apps. I like having the weather update in my glances, which is useful before stepping out the house in the morning. Also among my glances is the music app, which allows control of my music from my iPhone without having to take my phone out of my pocket - particularly handy on the crowded commute. The native Activity app keeps record of your calories burnt, minutes spent exercising and reminds you to stand at least once an hour. I’ve never been one for tracking my exercise as I’m naturally active, but for those who are keen to improve their fitness I can see its value and I do appreciate the reminder to stand, given the slump I easily fall into sitting at my desk. 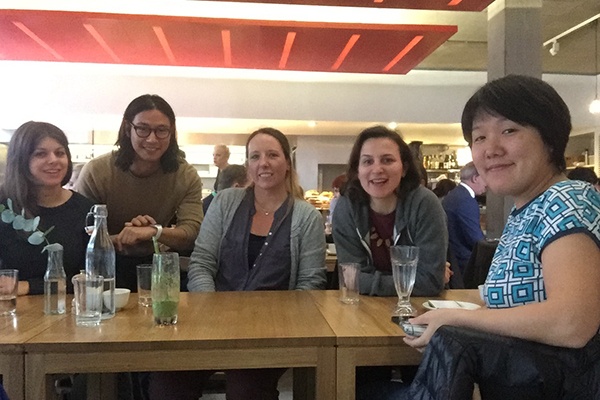 The Apple Watch is able to take photos from the iPhone remotely. Here's the happy design team out on a lunch trip. Goodbye, selfie-sticks.

Double tapping the crown will take you to the last viewed app, which aids continuity in your task flow, whether it be returning to a news feed, inbox or map. Holding down the crown will activate Siri, which I have only genuinely found helpful for setting reminders for tasks at a particular time. Message notifications come in through a vibration, which can then display when looking at the watch. Surprisingly, I do find myself enjoying the ability to quickly read messages on the watch, and although it’s only a tiny inconvenience to grab your phone, somehow I find it less interrupting when I’m in the middle of a task or on the move. Receiving multiple messages at once is a bit unpredictable though, and often these messages can’t actually be read. In turn I'll have to look at my phone, resulting in a frustrating and disjointed experience.

One crisp Autumnal morning I take the watch out for a run with the Strava app. Unlike fitness trackers, the Apple Watch doesn't have an internal GPS. This means that if you intend to keep record of your route, you'll need to carry an iPhone with you. I start running and with the press of a finger the timer starts ticking along with my speed and distance covered, which is all presented clearly enough to take in at a moments glance. Trying to change song track while in Strava was a problem, though. Navigating is just too fiddly if you’re not stood still. It’s certainly a nice-to-have pairing, but if I were a serious runner I might consider buying a GPS fitness tracker and a light MP3 player for simplicity’s sake. 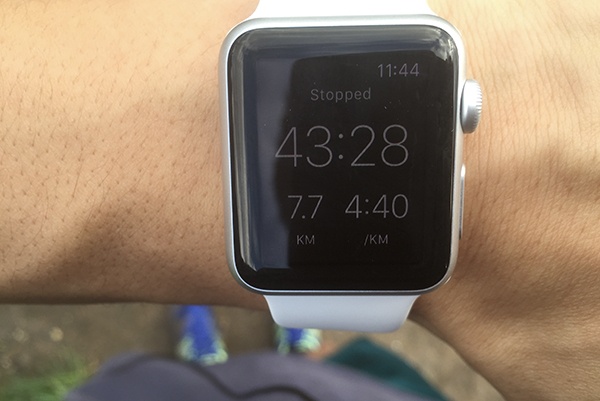 Having read positive reviews, I try Google Maps, one of the more popular apps for the watch. Once I set my final destination using the iPhone, I tuck it back into my pocket. In theory, this should allow me to glance at the watch when I am notified for simple directions, rather than being glued down to my phone, helping me avoid oncoming lamp posts and commuters. The thing is, because my internal compass isn't actually calibrated with my iPhone, directions like "Head East towards X Street" are rendered utterly useless. Instead, my colleague takes charge and leads us through some scenic London shortcuts. This is a bit of a shame, since the technology is ready, but the usability is let down by the execution.

In its early stage, apps for the Apple Watch seem to be in varying stages of development. The BBC app for example is excellent at summarising succinct headlines, which you can then read in further detail or open the full article on your iPhone. The Guardian, on the other hand, has a beautifully designed app on the phone, but is appalling on the Apple Watch. Publishing only one article at a given time and removing any control of browsing content leaves me feeling disempowered and discontent.

The Apple Watch feels like an incomplete product, a prototype in its infancy still testing the waters, or maybe a strategic move for Apple to assert its stake in the market. Generally, I find it too delicate to navigate between apps, and the apps themselves often take a few seconds too long to sync with the iPhone. At other times I don’t find it sensitive enough; a casual glance at the time won’t work and you’ll sometimes find yourself doing a double take to ensure it displays. Although slight, the momentary delay between flicking your wrist and reading the time creates a small and unnatural disruption in fluidity.

With the development of better considered apps and hardware, such as integrated GPS, smart watches are likely to become more versatile and seamless in our everyday lives. Indeed, wearables in general and their interaction with ‘The Internet of Things’ are likely to shake things up in unexpected ways. They are already bringing new changes to healthcare and medical research and are likely to spread to sectors such as Insurance, Manufacturing, and Childcare to name a few.

But if the Apple Watch was made to make communication lessinvasive, then I believe its purpose has failed. In the past few weeks a number of friends have commented (with offence taken) that I can’t keep looking at my wrist. Most of us learn to be courteous enough to ignore the vibration of a phone in a pocket, but it’s much harder to dismiss the temptation to glance down at your wrist. Naturally, the added complexity and functionality won’t change the fact that looking at a watch is universally recognised as an expression of impatience and boredom.

Fans of the watch will cry out that there’s no mention of Apple Pay here, and it’s something I would have tried had I not had a complication with the bank. That said, the more popular smart watches become, shops will need to anticipate how they can make payments easy enough for everyone, regardless of height or disability, without it feeling needlessly painful or harder than taking your card out your wallet. The biggest obstacle for the wearables market could rest in addressing behavioural change and integrating devices in truly seamless ways that won’t upset social norms.