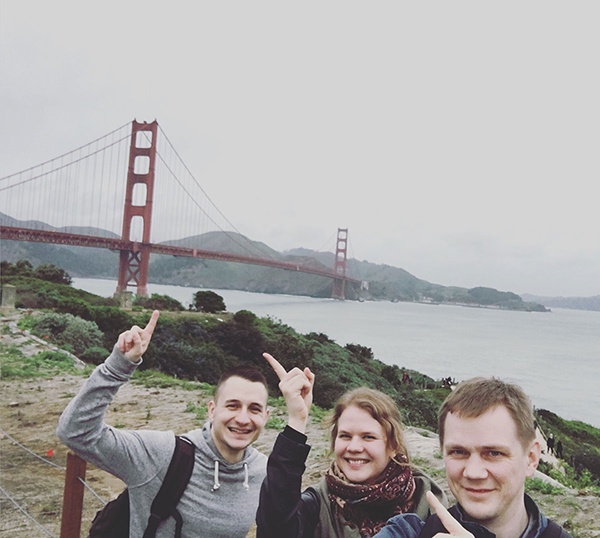 Roman and Kadi and I are back from San Francisco and Fluent conference. A week-long escape into the rains and floods of California, with an extra flavour of JavaScript. This was my second Fluent conf, and it’s time to share some takeaways.

For now this is the last Fluent event in San Francisco. It was announced that next year will be in San Jose, and there is also one more Fluent this fall coming up in Amsterdam.

All keynotes from day 1 and 2 are available online. To save your time, here’s my favourites:

Douglas Crockford from PayPal also did an intro on The Seif project - PayPal’s own reinvention of the Internet. They are pretty early stage, and their vision is debatable to say the least. They do have good intentions.

Last year React / Node combo was something of a novelty, a curious thing to learn. Netflix was doing introductory level talks on React and why they chose it. This year React / Redux / Babel / Node is the default. Dan Abramov's name was mentioned in every other talk. Interestingly, Facebook was pretty much absent from this conf - which is understandable since they are busy having their own React-dedicated events. Notable cool guys on the ground included Google, Netflix, New Relic, Uber, and Léonie Watson doing an epic talk on a11y. 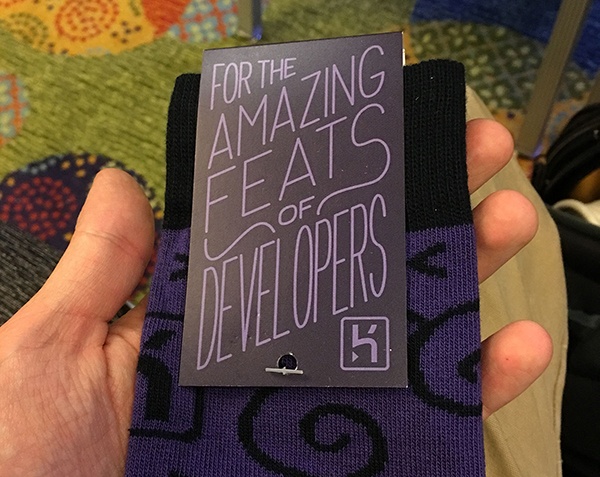 A lot of talks were about interesting ideas or wishful thinking, less of production-ready reality. I suppose this is what webdev is about - there is no platform really, more like a herd of clients and engines somewhat held together by loose rules and standards.

Meanwhile, Brendan Eich was pushing for service workers, WebAssembly and class decorators. He was surprisingly quiet on the sensitive topic of his new browser Brave, which blocks bunches of JavaScript by default.

The keynotes were followed by five tracks of talks to choose from. Sometimes it was hard. These talks are not available online and will be later published and sold by O’Reilly. I’m going to handpick some quick takeaways from the sessions I attended. 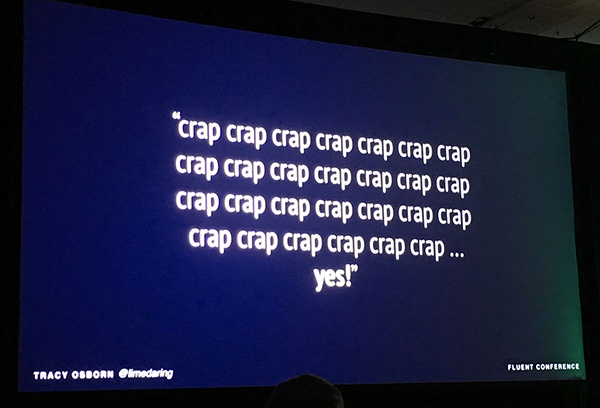 Design process in a nutshell 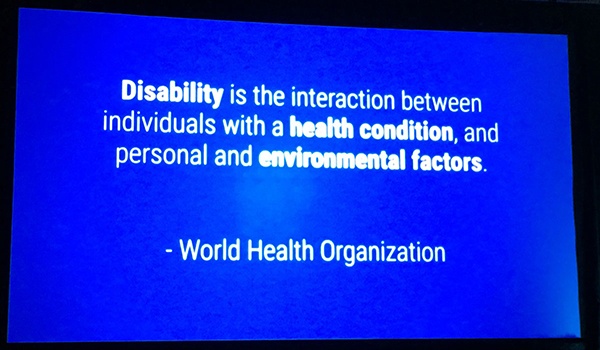 Accessibility is still very important. There are lots of different disabilities, and addressing such users is more important than addressing old browsers. Different OS platforms contain different a11y APIs, but with regard to the Web, semantic HTML combined with basic ARIA markup gives a huge heads up for a11y tools to read through your page correctly.

Léonie Watson did a highly practical talk on semantic HTML and ARIA roles. Her screenreader for some reason failed to function when connected to the projector, and so she did the whole talk from memory, without being able to see any slides.

There was also an announcement of the upcoming Web A11y free course on Udacity.

Google did a presentation on their vision of web apps and software delivery to the end user. In a way from the user’s perspective there is no difference between web apps and native apps, as long as they behave in exactly the same way. There’s also a negative trend regarding users buying new apps from App Stores, and in general they use only three native apps 80% of the time. Google wants to address issues with web apps lagging behind native apps in terms of offline availability, home screen shortcuts, direct to full screen launching and push notifications. Some of that stuff is already solved. The biggest missing piece is probably offline access, which they claim can be resolved with service workers and an extra layer that intercepts all requests and behaves according to the network availability.

All these ideas have a common name and a site - Google’s Progressive Web Apps initiative.

As an avid npm user I spend a good chunk of time every day typing npm into console. There was a talk with various hints and hidden features that might be pretty useful.

There were two somewhat orthogonal talks on aspects of monitoring your production apps.

New Relic did a presentation on NR Browser, which is a handy way of getting data about how your users actually perceive the app. It gathers everything that a normal browser would, including JS errors, and time to load pages to the client based in various locations. Server side pages usually load 10-20x faster than client side. There are also a number of most strange JS related errors that can be experienced by users and their (derelict) browsers. You can also detect bad deployments by monitoring spikes of client errors.

Shape Security did a talk on dark traffic. According to them, 92% of the global web traffic belongs to non-humans, which is sort of a pity because you still get all the monitoring alerts, but none of your human users are actually affected. Here lies an interesting question of traffic origin detection. You are likely to only care about human users, but they are a minority nowadays. Most of the bots will also try and pretend to be real humans the best they can. Bots will try to authenticate with real usernames / passwords, which are quite openly available on sites like Reddit/r/pwned, or less openly traded for money on the dark net. Since most users are using the same password everywhere, bots will often succeed in signing in, then will crawl everything they can, and move on to the next site.

Falcor deserves a dedicated blog post. It is Netflix’s answer to GraphQL and Relay by Facebook - central store and dynamic data fetching combined with request optimisation. Its implementation however is distinctively different from both GraphQL and Relay.

@jhusain did an impressive job to a full house explaining Falcor while live coding an app and getting things to work. We are using GraphQL in our production apps, so my angle was obviously on how Falcor is compared to what we already have. Here are a few takeouts: 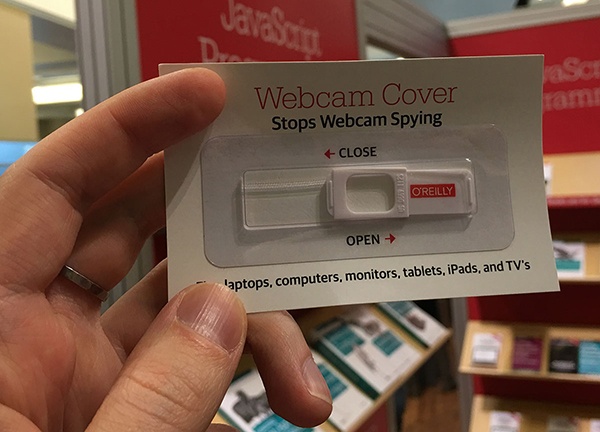 I shall come back to this topic and write a more comprehensive blog.Other relevant swag

We also attended a full day of workshops. The first half of the day was about implementing desktop apps with Electron, then we did a session on writing your first language compiler, and finally real time drawing on HTML canvas. Electron was probably most notable out of the bunch - in about three hours we ended up implementing two functional desktop apps from scratch. Roman is going to write more on this topic.

Electron provides you with tools to make native OSX / Windows / Linux desktop apps while using the familiar stack of Node and React. But unlike conventional web apps, you also get full access to the filesystem, no CORS restrictions and the ability to integrate into the system menu. If you always wanted to get your app behind the system tray icon, with Electron you finally can. 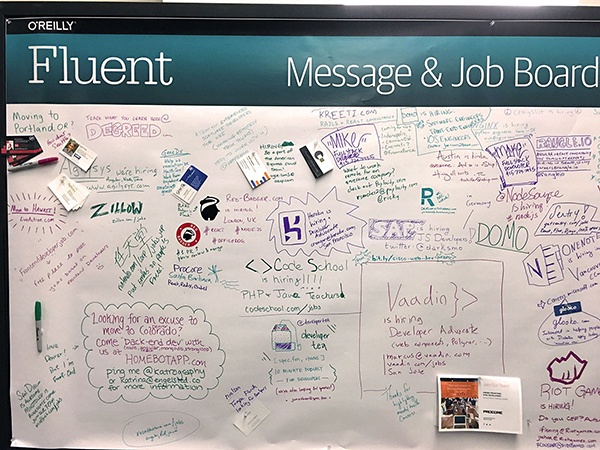 Red Badger is hiring and we have an #officedog

The general format over the conf was 30 min talks followed by 15 min breaks. After two or three talks there would be 30 min break. In the middle of the day there was an hour lunch break. Everything started at 9am and finished around 6pm.

Breaks were filled with extra activities you could choose to attend. The main attraction and largest source of swag was the exhibition hall, filled with companies presenting their products and giving out freebies. During the last two days the organisers also moved coffee and snacks to the middle of the exhibition hall.

I should probably mention - we were fed pretty well, considering the scale of the operation.

In the main foyer they also tried to get introverted software devs to talk to each other by having topical meetups, speed networking and lightning talks. 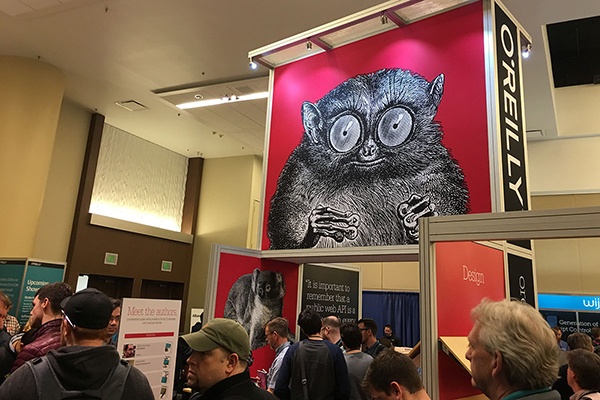 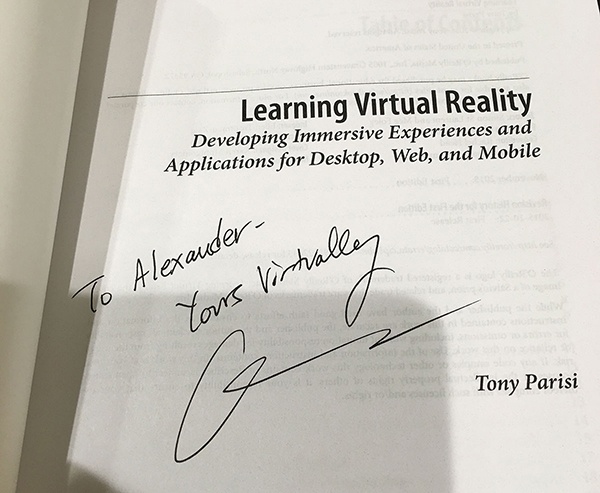 Being primarily a book publisher, O'Reilly brought a bunch of authors signing and giving away free books. I got a couple too.

This trip was possible thanks to Red Badger’s training budget programme. Me, Roman and Kadi had an amazing time, despite the daily dosage of rain. This time I also did daily video log episodes covering our full journey outside of the conference. Yes, we had some fun. 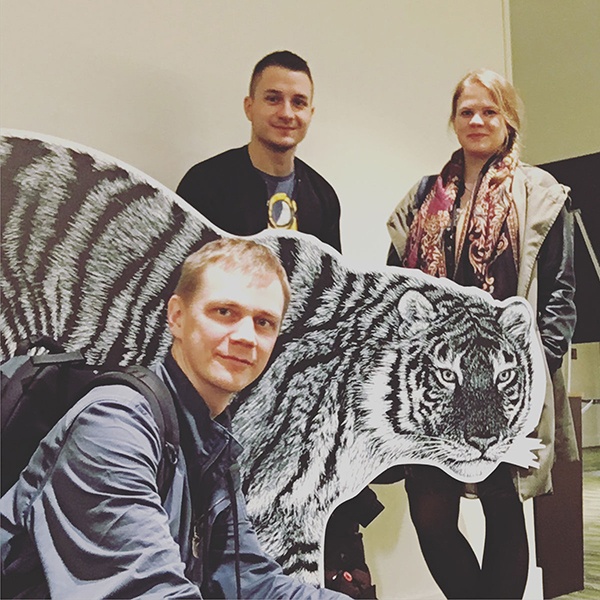 I enjoy Fluent mostly because of the variety of topics covered. Writing compilers, programming GPU, WebVR, fending off the evil bots, deploying clusters of containers, debugging performance - there’s something for everyone. So, thanks O’Reilly for making this a reality once again!

If you like the idea of an annual training budget, trips to conferences like this and a big focus on learning, Red Badger could be the place for you. Check out of current vacancies here.