There are two kinds of websites, which one are you designing? 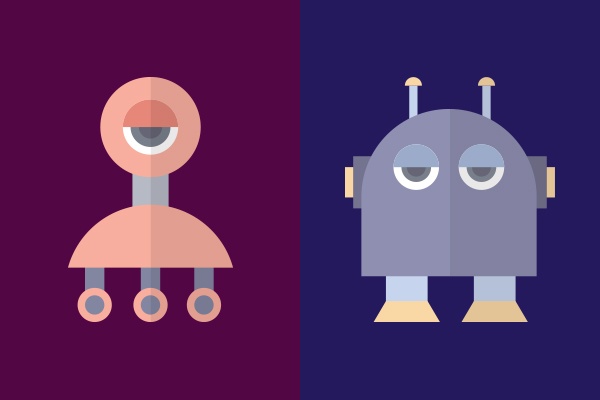 Somehow, in the fast-paced world of our many, many Red Badger Slack channels, I managed to accidentally accept an invitation to talk on a panel.

So, at an event hosted by inVision, in an very large building in Bishopsgate, I found myself flanked (stage left to right) by the Head of Design for Disney Labs, Lead Designer for BBC Worldwide (little old me) Head of Design for GDS, and the Creative Director of Lagom Magazine - talking to 400 people about Design+Ethics.

We were asked a lot of questions. Everyone said some interesting things. So over the course of a few blog posts I’m going to outline some of the issues we covered, and some of the debates that could come out of it. And maybe you’ll have some of those conversations around the water cooler.

Hey, I drew that!

I’m going to start with one of the questions that interests me the most, which was broadly addressing the issue of websites looking the same - and whether there is a line a designer can cross between design inspiration and design theft?

What happens if you see something you’ve designed re-used, and repurposed, with someone else’s name on it? A difficult question, but luckily one I don’t really have to think about. Because I’m a consultant, I spend a lot of my time either starting design work, or putting my sticky little mitts in the middle of work that’s already on the go. Rarely am I a finisher.

But when you think of this in terms of the web - who really owns the idea of the burger nav? Who owns the 3 column pattern? Who owns the concept of a hero image? If these are used over and over again, is it imitation, or is it in fact some kind of hive-mind-design-pattern? And should we be reframing the question, to ask instead what our ethical responsibility is to *make* things the same? If you think of “the typical website”, what comes to mind? That’s right, a full-width image with an H1 overlaid, then 3 columns of info, then perhaps a portfolio element. It’s not the most inspiring, but one thing you can be sure of - most users will understand it, know where to look for the content they want, and it will work on their phone. And for the most part, that’s all users care about. Simplicity and patterns win.

During the conversation, Ed Fairman (lead design at BBC worldwide) said that as a community, designers are proud of sharing ideas, of sharing work - and I think accept with that the probability of someone else using the theory or application in their own work. Now these systems are established, the challenge is for designers to do their own thing within them.

There are only a certain amount of ways to design a product and it remain effective. At one point Louise Downe asked the audience “who actually enjoys novel things on the internet?” and the result was, well, underwhelming. It turns out that not many people like novel things on the internet - and I expect those who do only do when they’re browsing around, and if they were looking for a something specific like, say, the etymology of the word “kangaroo”, I’m reasonably sure they’d be annoyed if a silhouette of Rolf Harris singing ‘Tie me Kangaroo Down Sport’ scrolled across the screen (what? I’d say that’s pretty novel). I think that this similarity of design is in fact a reflection of what users expect from a website, and of designers and UXers listening. So, from whence else does this similarity spring forth?

Think for a moment about a fork. They’ve been around for quite a while (according to Wikipedia, the earliest one found is dated to be 2400 BC). They may have ‘evolved’ by being made of different materials, but, fundamentally, the way we use forks has remained the same, and so the design of a fork has remained the same. Not so with the web. With the proliferation of tablet and mobile devices, and their increased internet connectivity (you could even read this blog while being 190 feet underground on the tube, for crying out loud) the demands on a website have changed. We’re using it in different circumstances, in different ways, and to do different things.

At the moment the design trend is big, bold, flat, simple. Many may think this comes at the whim of some group of self-proclaimed superstar-ninja-design-prophets (my mother, to this day, refuses to upgrade above iOS6 because “why would I want something that looks like it’s been designed by a child?”) But really, this trend is (in part) down to the limitations of our fat little fingers. As web traffic from mobile devices is increasing every day, so is the knowledge that soon having a touch-unfriendly site will no longer be an option. Big bold buttons, card-based design (more clickable area!), boxy layouts and easy column hierarchy are all resultants of touch-based interactions, and so naturally that has impacted on the aesthetic.

The skeuomorphic approach of the likes of my mother’s favoured iOS6 has disappeared from new web designs, not just because of the ‘modern look’ or touch screen constraints - it also had an impact on page load time. Heavy graphics and large css files meant that users on a slower mobile network had a significantly low-grade experience compared to those on a newer device who paid for 4G - and that is an unnecessary separation. As designers and developers in this new era of on-the-go browsing, we have a responsibility to make sure the content and information a website provides is available in the same way to anyone who chooses to look at it.

Designers are excited about this, because responsive design allows us to make the most of our screens. In the early (and not that long ago) days of mobile design, the very term ‘mobile design’ meant literally designing for a mobile phone. So you would design two versions of the website - one for computers and one for phones. There was no in-between. As technology has evolved, so has design - it’s simply unsustainable to design a version of the same site for each device that we can view it on - especially as now those range from the 1.4 inch Apple watch to the 88 inch 4k TV.

With HTML5, JavaScript, CSS transitions, standards compliances for browsers, and users increasingly becoming creators, the internet is no longer a place for the few to build and the many to browse. People are more interested than ever in having their own space, creating, uploading and sharing their own content - and with this interest has come the evolution of frameworks. With no design or code knowledge, people can not only create their own website in a matter of hours, they can create a site that other people understand how to use. This is because all the big frameworks (think Bootstrap, Foundation, Squarespace etc) have all used a standard pattern that has become recognisable on the web. As this shared language of interaction becomes more widespread, so the internet will become more accessible and intuitive.

At one point Elliot Jay Stocks asked and answered “What value does bespoke work bring?” The answer was a deeper understanding of the medium. So we now have to address how we navigate this frameworked, patterned landscape, where we have these design systems that are common, but are also expected to create something novel. As a designer creating a web space for a client’s content to be showcased, I think we have a responsibility to do that in a recognisable, effective and frictionless way. And at the moment that means gradually defining patterns and encouraging behaviours that are relatable and effortless.

Fancy being part of our team? Head over here to check out our Digital Designer job spec!