TL;DR: you’re not a unicorn anymore

Living in the technical community in Shoreditch, I’m overexposed to web geekery in comparison to those who don’t work in tech but because I don’t code for a living, much of it still passes me by. The questionable grammar – “internet all the things”, deliberate misspelling – “WAT” and the like provides a closed community in which developers speak to each other in shorthand – and those who don’t get it, aren’t welcome.

I asked my dev mates, they confirm:

The desire to speed conversations up has fed a subculture of speaking in shorthand since the earliest days of the internet – when speed, specifically connection speed, was definitely a limitation. Even the reddit about the first internet meme is predictably full of memes, some so dense I can only sense their presence, rather than identify them. Many of them rely on other geek subcultures like gaming or sci-fi, e.g. “it’s a trap” is from Star Wars.

Language is a magical thing – it adapts to suit the purpose and situation you find yourself in. At Red Badger we try not to use buzzwords or popular terms in our job ads because they’ve become cliched and overused. Examples include calling UX Designers “unicorns” or engineers “rockstar developers”. When I just asked our Community Manager to remind me of some of these, she said

“They make me feel a bit sick.”

When you work in a fast-moving industry like technology, it’s really important to stay up to date both as a developer and in support roles like marketing and talent. If you use the wrong terms or use terms wrongly, you will very quickly drop off people’s cool lists. In fact, there’s a term for doing just what I am doing right now: “FellowKids”.

This says it all – something that starts off as a compliment designed to change perceptions of roles becomes a twee or worse, sycophantic banality. By trying to be cool, you are the furthest you can be from cool.

The power of language, especially English, has long been it’s flexibility and willingness to adopt non-standard version of itself; adaptations become mainstream or locally/culturally – specific informalities become universally recognised. In the era of global communication, this happens in subcultures that exist digitally as well as geographically.

The interesting counterpoint to all this is the accuracy required to write code. Misspellings and failure to apply rules renders code useless, so the need for accurate typing, clear concept of meaning and remembering to finish what you’ve started is a key skill of engineers.

Using the wrong terms when you’re talking from outside of the subculture, you run the risk of boring your audience faster than getting your message across. If you try to speak their language and get it wrong, you’ll lose their attention almost immediately, and permanently.

All of this lines up with Agile/Lean methodology.

Agile is a bit of a leap of faith if you aren't used to it. Lots of the organisations we work with start off uncertain how it will work for them. Agile done right is a powerful tool. It changes cultures, working practices, outcomes and profitability. It works. But, like being part of a subculture – you've got to go all in.

TL;DR – if you aren’t willing to commit fully, don’t try to run with the unicorns. 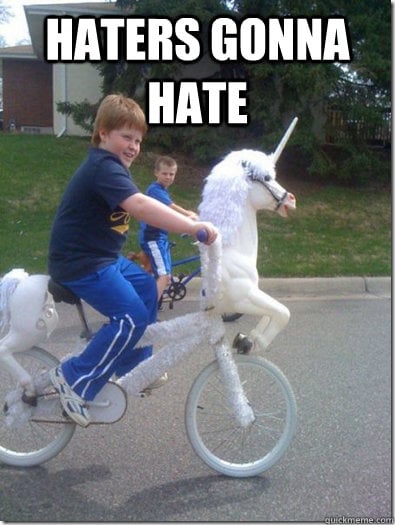