We hired a German Castle – AKA the best summer party ever

Last month all the Badgers plus a whole heap of our friends and partners headed off to Leipzig to spend the weekend in a castle. Red Badger is quite well known for throwing pretty fantastic parties (last year we took everyone to a private island) but I think last weekend was our best yet. We have resorted to writing a collaborative blog as after looking through the fantastic photos we have realised many of us have a missing hour here and there; so here are some of our favourite bits....

It was that time of year. The Badgers were ready. The annual summer party was upon us and in preparation we had packed our bags, booked our tickets and made arrangements to convene in one of the various trains heading to Standsted airport on that Thursday afternoon.

Badgers, distributed around Central London put down their tools, let down their hair and embarked on a journey to the mystical place that had been slowly revealed from a series of teasers earlier in the year.

The holiday had started.

Champagne toasts on the train, cheering and laughing and last minute panics, checking to see if everything was packed.

By the time we got to the airport the Badgers were united with their beloved plus ones for double the fun. Meeting and greeting new faces and old. Distributed teams, across bars in departures. Long queues. Very long queues. Then the next long queue to check in to our flight.

Looking up and down the line every other person was a Badger. The plane took off, more drink, some sleep then land.

A slightly lethargic but excited group gathered in arrivals led our fabulous crowd control expert. One by one she called off the names from her list. Organisation like this does not come easy. Herding cats.

And off we went.

1 hour later the hi-tech luxury coaches pulled up to a mysterious location in a quiet village.

150 tired but excited, ready to go again, yet some hungover people all disembarked. It was 11pm at night.

BOOOOOM and a fireball of red hot flames shoots into the sky. Some duck and cover, some cheer. Everyone is amazed. Again, BOOOOOOOOM. Another fireball. A dragon is spitting excited fireballs into the air and then above the din the sound of the founding Badgers and the rest of the welcome party can be heard shouting, laughing and enticing these coach loads into the Castle.

This is where the real fun begins.

Finally the long awaited evening comes….I had been preparing my outfit for months and I was so curious to see how everyone else looked like. And I was not disappointed!

Despite being the only known “goth” in the company, everybody had made a massive effort and when I walked  down the castle stairs to meet at the Champagne Reception accompanied by a String Quartett, my eyes were overwhelmed with lots of black, darkness, mystery, fascinating masks and beautiful smart dresses.

The evening continued  with a great dinner and when we entered  the hall, everything was  decorated in the classiest way and there were beautiful flowers and candles all around, thanks to the work of our 3 amazing colleagues Amy, Saadia and Becca. I am sure I wasn’t the only one feeling like I got the time machine back to the 12th century.  The food was fantastic and we soon were drowning in rivers of delicious wine from the castle vineyards. After the dinner the merry Badgers met on the dancefloor to set free their inner ballerinas at the rythm of Trikosaki music (a band hired just for the occasion) and not long after down in the basement for some Techno courtesy of our founder Cain and other amazing Djs!

Remembering it now, I get a weird feeling of nostalgia and euphoria at the same time. Being in that decadent beautiful place, all dressed up, all having fun, all sharing our life outside of work, all being happy,  truly made it a special and unforgettable evening (despite some blurs given by the wine…). Most of the Badgers made it through the end of the night and I retired in my room at the early hours of the morning, with smudged make up and the happiest smile on my face!

The day After… Harri Adams

I would love to tell you about our visit to the vineyard on Saturday, but sadly I was still dancing with a bottle of prosecco clutched in my hand when many badgers were getting up for breakfast. Safe to say, when I eventually went to bed, I was out for a good few hours. When I eventually emerged (around 5pm) I was feeling fresh and ready to do it all again!

By this point, there were some interesting tan lines (award for best suntan undoubtedly goes to Jon Yardley’s sock-marked ankles), some jolly wine faces, and all sorts of stories about the weird things that had be found in the castle the night before. Sombreros, bottom halves of mannequins, giant bathtubs, creepy portraits, strange metal sculptures, furry-walled rooms… And that’s just for starters.

We sat by the pool in the evening sunshine, drinking more prosecco and smothering each other in glitter, growing more ravenous by the second. As soon as the BBQ was ready, we scampered up to the ballroom and enjoyed a feast of german sausages, burgers, halloumi and a variety of salads, all washed down with many more alcoholic beverages. I’m sure you’re starting to see a pattern here… 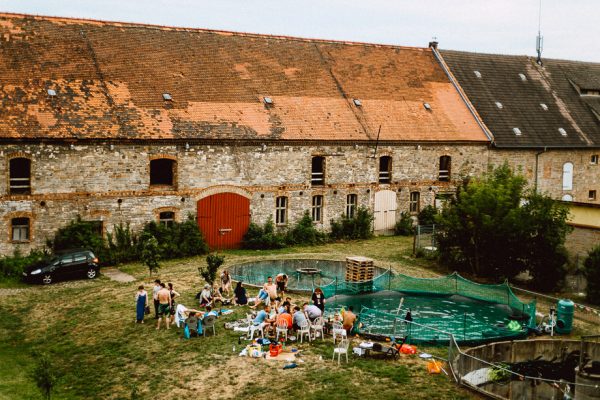 An hour or so later, and we heard there was a surprise waiting for us all by the pool. Electric with excitement, we gathered outside, just as the first of the fireworks lit up the night sky. What a spectacle! A truly special and memorable moment for us all - sparklers in hand, or in Federico’s case, a flare in hand. 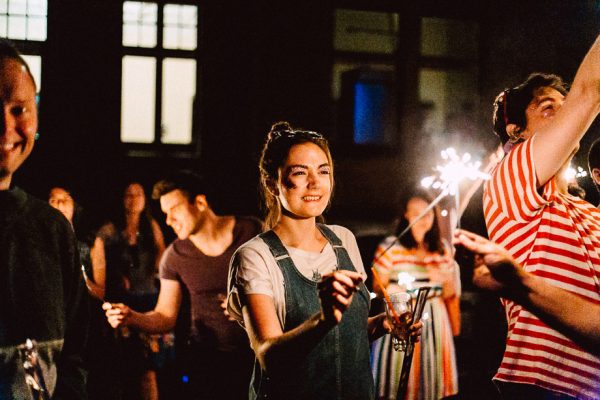 Afterwards, feeling on a high, we all headed back to explore more of the castle. I found myself an hour or so later in the Liebe room, a room with fur walls hung with many naked pictures. I chose not to think too carefully about what those walls had seen. Towards the end of the night, about 20 of us ended up sat around the huge dining table chatting and listening to music. The venue couldn’t have been better suited to us and it was fantastic to share this experience with so many like-minded, fun people - it’s sometimes easy to forget they’re our colleagues.

Huge hats off to Saadia, Amy, Val, Becca & Nathalie for all their hard work - without which either the party would never have happened, or we’d all still be there.

I think it is fair to say the castle itself was EPIC. I remember when we first went over in June to do a recce - there had been a rave for about 300 people the weekend before, the place was a tip, people were literally still crawling out of it - but even in its state of complete chaos we were still blown away.

It took 3 hours for Armin to give the complete tour of it (albeit we were stopping every 20 minutes to refill our wine glasses) and at the end of it all i thought was the Badger’s are going to bloody LOVE this!

As soon as everyone arrived on the Thursday evening (much to Dave’s dismay...) they spread like wildfire - for such a huge place we really managed to make our mark. From the main dining room, to the balcony, to the weird Liebe room (I still haven’t worked out what that room is actually used for although i think i have a good idea…) there were Badger’s everywhere - it was the perfect setting. 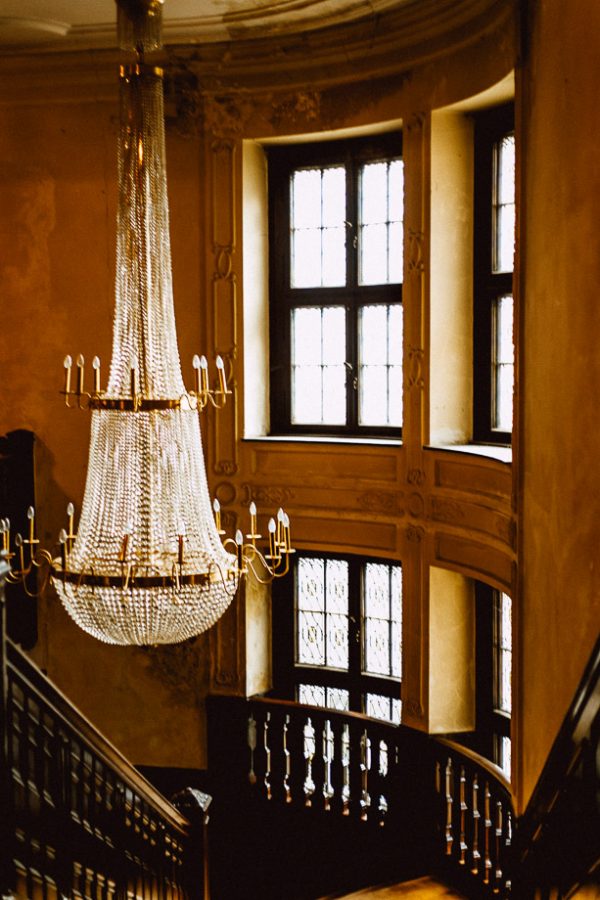 I think the best thing about the castle was how versatile it was. On the evening of the Masquerade Ball everything was done to perfection – the chandelier staircase leading down to the champagne reception looked like it was built for royalty and the main dining hall that we ate in was equally as grand… Fast forward 6 hours and you would find half the badgers had made their way down to the underground caves where the after party had begun. Things were a lot less fancy down there – it was dark and there was a smell that I would like to forget – but no one seemed bothered – they just wanted to carry on the party.

It really did cater for everything we wanted – An evening to begin with decorum and to end in debauchery.

I think the main reason for the weekend being such a success was because of Armin (the owner of the castle). For those of you that met him, you will agree he is a unique character – his answer to pretty much anything to both men and women is “just take your clothes off”. Throughout our trip he was on hand to make sure everything was going to plan and that we had everything we needed, e.g. 20 extra bottles of Cava at 9am by the pool – it was there without fail. 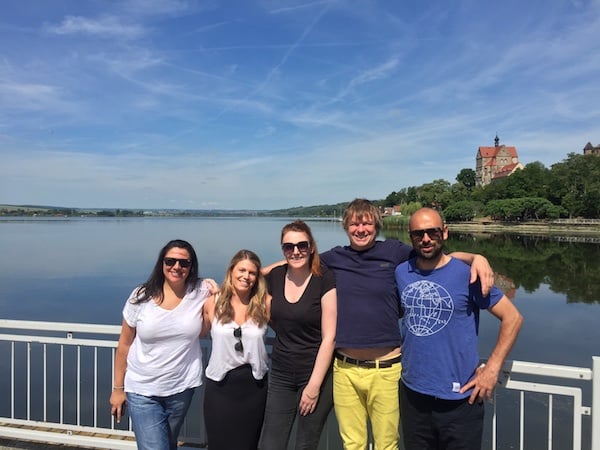 (Armin with his brilliant yellow trousers)

The castle really was a magical place but it was the people that made it special. Now that we have been back a couple of weeks and just about recovered - who is ready for round two? I am.

It may sound like it was one big party, and it was, but we also spent a day thinking about what we want to achieve over the next 12 months and came up with some great ideas. Spending time away together is also a great opportunity to build memories as a team and remind ourselves what fantastic people we work with. I think we'll be talking about this trip for a long time to come!

There are heaps more great photos from our trip here. If you'd like to join our brilliant team check out or vacancies here and get in touch!