The Future of the Cloud: Go beyond servers & containers to increase speed to market

Red Badger recently hosted an event called “The Future of the Cloud: Go beyond servers & containers to increase speed to market” in collaboration with Horizon Business Innovation.

The objective of the event was to illustrate to the audience the things they need to do to allow them to focus more on delivering value to their customers, move with greater speed and focus on quality in everything they do.

In the current digital climate consumers are adopting new technologies at light speed and great customer experience is no longer appreciated, it’s expected.

Cumbersome processes, large operational costs and a skills shortage makes it difficult for enterprises with digital products and services to keep up with more nimble, innovative disruptors who can create new products at rapid speed and scale, delivering constant value to their customers.

The disruptors are quite literally snapping at the heels of Enterprises. Look at banking for example. When Metro Bank got its license in 2010, it was the first new high street bank to open in the UK for 150 years. Since Metro there has been over 20 new banks who have lodged applications with the Bank of England. This was in part due to the Bank of England simplifying the process with lower capital requirements for setting up new banks but it was also largely due to massive developments in Open Source and Cloud Technology that have underpinned the explosion in potential disruption in the banking sector. Banking is not alone. The big players in other sectors are also at risk of the same disruption.

So, back to the point of the event, how can Enterprises compete with the disrupters by challenging them at their own game?

Enterprises need to focus on providing customer value by directing attention to product development and removing as many orthogonal concerns as possible. This first requires a culture change in the organisation but in addition to that there are number of tangible things that disruptors are doing that Enterprises should be looking to do too.

Christina Scott from News UK kicked off the evening with a talk about how she has evaluated the culture of News UK and the changes that she has made. She referenced an article in The Harvard Business Review called “What holds the modern company together”. The article describes the workforce in terms of a community divided into two types of distinct human relations: sociability and solidarity. These are the scales of friendliness amongst staff versus their ability to pursue shared objectives quickly and effectively. If you have the best combination of the two your organisation is classed as communal. This is the nirvana. The other three classifications in the grid are fragmented, networked and mercenary. Culture is something that all organisations need to look at as a priority. 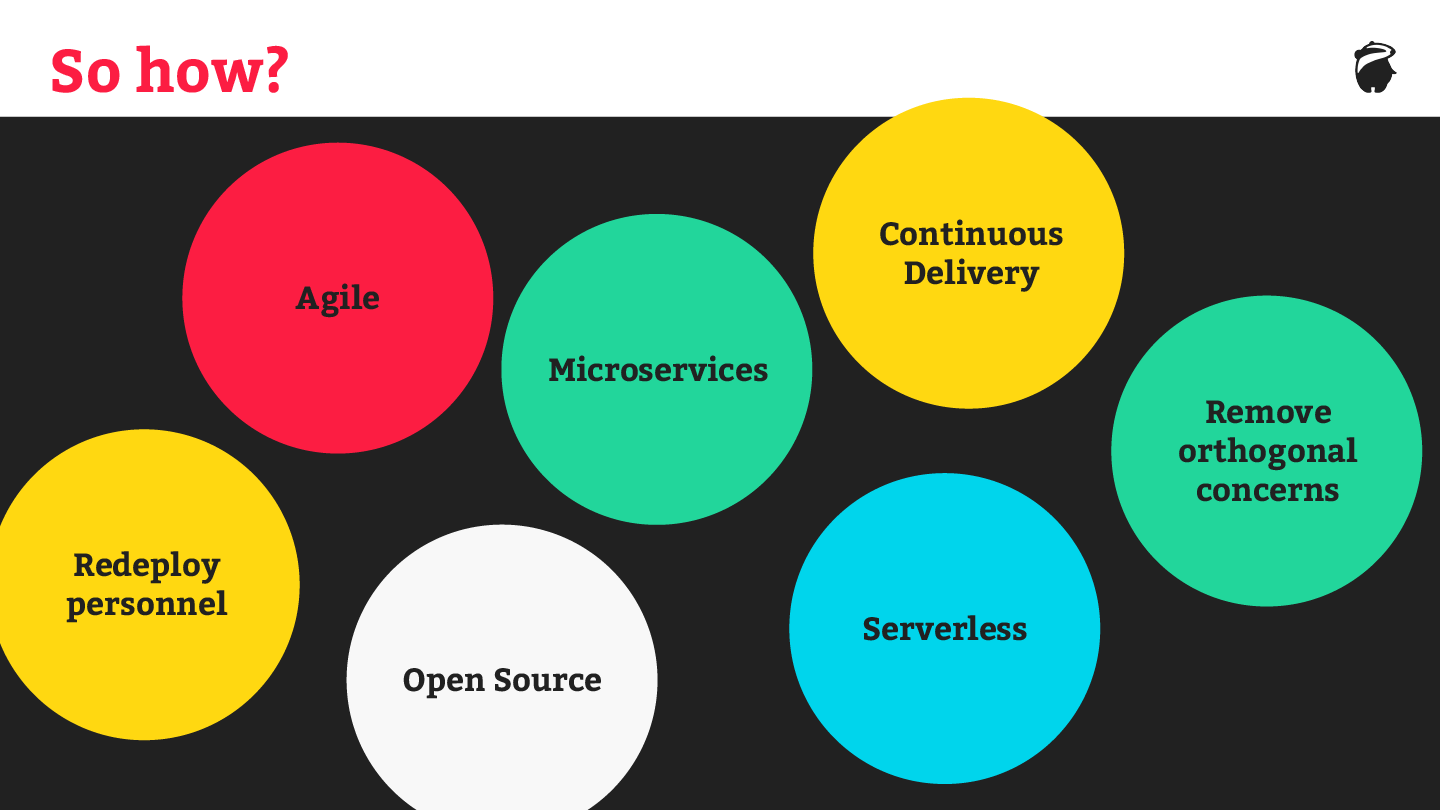 A good culture is important to then enable you to focus on “doing the right thing” when it comes to Delivery. Red Badger CIO, Stuart Harris discussed in the 2nd talk of the evening a few key areas that are key to successful delivery:

We assumed the audience, largely being CIOs knew the benefits of Agile, Open Source Tech and Continuous Delivery so the focus of the event was how they could innovate with Cloud Infrastructure to support speed to market. 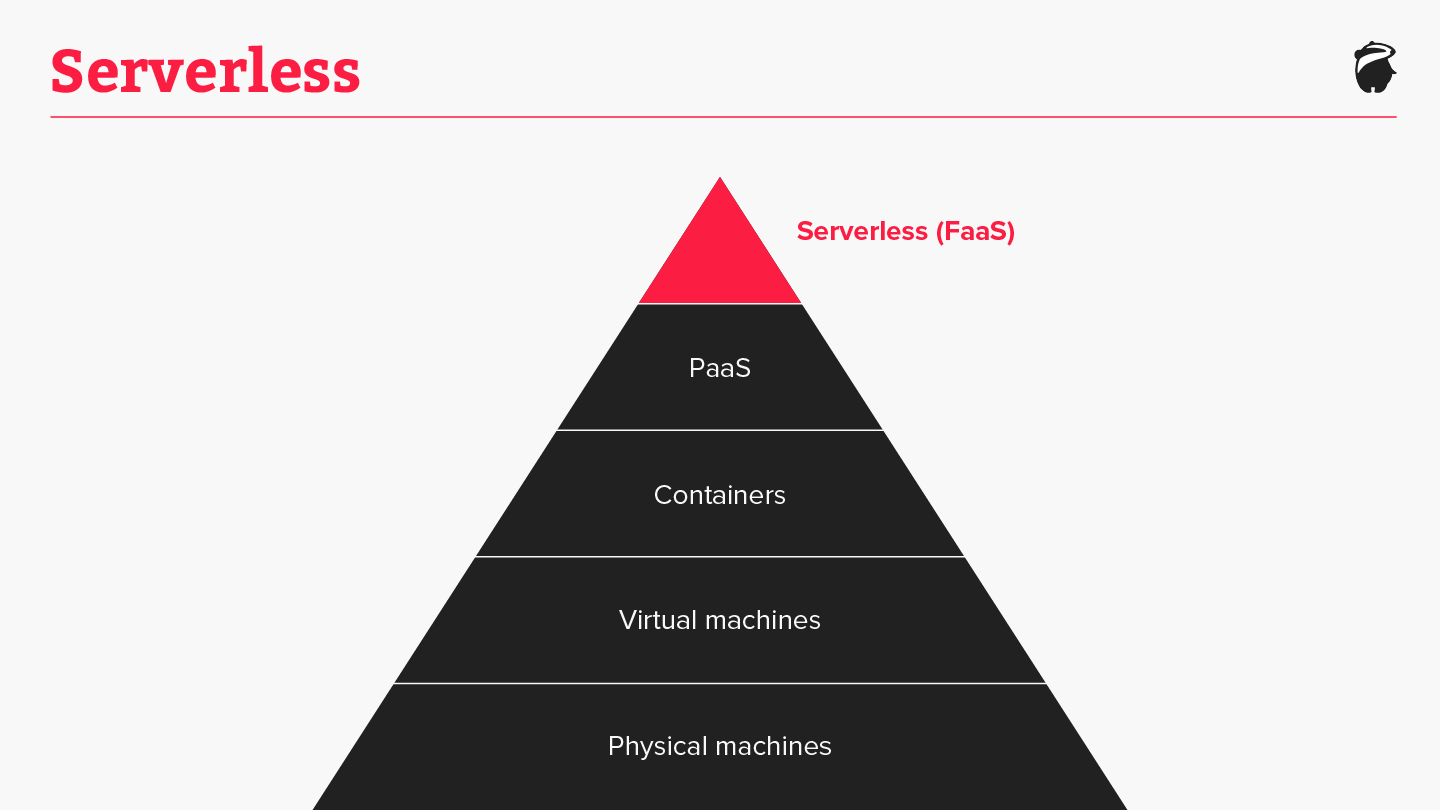 Both Stuart Harris and Florian Motlik spoke about the benefits of the options that can be used in this space and how the disruptors have utilised innovation in the cloud to great success. The two key areas in both talks were around Automation and the Removal of Orthogonal Concerns. Florian argued that it is impossible for an Enterprise to be as good as Amazon at managing infrastructure (as that is their core business) and that all Enterprises should remove Infrastructure from their control, outsource it to a Cloud Service Provider such as Amazon and re-focus all of their efforts into product delivery and providing value to customers. The future of Cloud Infrastructure is Serverless and Enterprises can really innovate by skipping straight to adopting Serverless as their Cloud Strategy, removing orthogonal concerns and focus on delivery products for their customers. However, this could be a jump too far for some right now so Stuart Harris presented all of the options including Virtual Machines, Containers and Platform as a Service (PaaS) but explained that in order to beat the disruptors at their own game, Enterprises should really be thinking about Serverless now.

The event finished with a panel debate, with Tom Mackintosh from Tesco joining the three presenters to discuss the importance of topics discussed during the evening such as Culture, Auto Scaling in the Cloud but particularly regarding Serverless and how it is pivotal to the future of their organisations. This was a fascinating debate that provided some amazing insight into some of the challenges Enterprises such as News UK and Tesco are facing and how innovation has allowed them to stay ahead of their competition.

The companies in the audience were all at varying stages of innovation when it came to cloud infrastructure, but it was refreshingly surprising to hear that a few had already implemented containers. However, with Serverless the audience had some food for thought about what changes they can make in their own organisations to be catalysts for change.

Red Badger have already helped some of our clients deliver products into production that are based on Serverless technology. This blog only skims on the surface of how this can benefit you. Get in touch if you’d like to discuss in more detail about your organisation. Perhaps we can help you to beat the disruptors at their own game.