Increasingly, VR is being used as a tool for different sectors like healthcare, education, tourism, automotive and retailers and I want to focus on how these changes could have a positive impact on these sectors.

Some early steps have been made on how VR can be used in education and help the student learn through an interactive way. An example is Marcus Storm (the founder of VR start-up Evanescent Studios) who is developing a VR app that he hopes will be used in classrooms to improve language skills.

The tourist industry could also benefit by using VR because users can pretend to be on a specific destination before they actually go there, as it allows for guided tours of any place around the world. This will especially help smaller and less popular places, as travelers can observe what each destination has to offer.

Healthcare professionals can gain insight into what they’ll actually experience by using realistic virtual environments or virtual models of human anatomy. Surgeries can now be viewed from 360 degrees and in real time from all around the world but also robotic surgery can now be performed with this technology.

VR in the automotive industry has improved processes for design, safety and purchasing. The realistic elements of VR allow designers and engineers to test how cars would look and function without having to build multiple models.

User experience designers today play a part in one of the most exciting moments of the past decade, the rise of a new medium: virtual reality (VR). And with this comes a new set of challenges that give UX designers the opportunity to build a new language.

VR is a new medium and designing for it, has the same basic principles and techniques that we already know like sketching, photography, motion design but on the other hand, there are  different challenges. There are elements like depth, curved design, sound design, interactions, environment that play major roles in tricking the brain into believing the virtual world is real.

To begin with, designing for a spherical world is very different. The solution is stop thinking about the canvas as a surface, and imagine it as a sphere with the user at its center considering also another factor that is depth.

Designers now have a full 360 field of vision to play with. What’s actually going on inside a VR set like Cardboard or Gear VR? A single screen is effectively split into two, dividing the resolution. Your eye actually focuses on the center of this area, a cone-of-focus that quickly fall-off towards blurriness. This makes for a fairly small, fairly low-resolution area to work with. 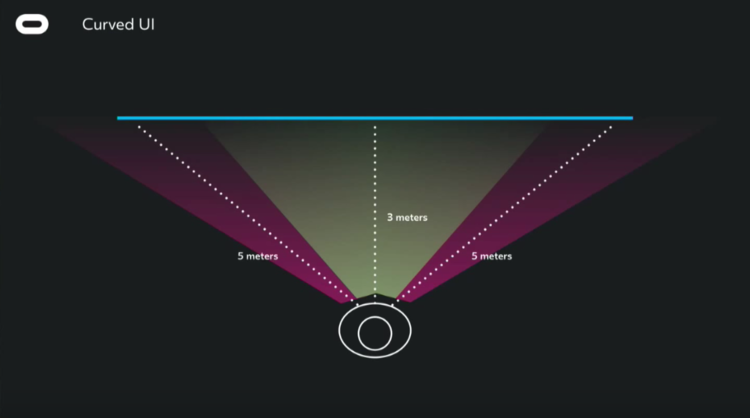 The most common solution that is used on the web is the flat design of the interface. But on VR, it is difficult to read text or images in a 3D environment. Curved design is marginally better. As the content is curved around the user, making it much easier to read text or images. First of all, the hierarchy can be implied by keeping the main content to the cone of focus and secondly, you can use the peripheral area in order to include more content and environment that still remains accessible.

In VR, designers have been fitting content and navigation inside the frames of displays, translating our real world experiences to icons and other UI elements (Bill Moggridge, 2007). We try to avoid transferring 2D elements to a 3D environment because it ruins the immersion that VR offers. All the UI elements, experiences, menus, text, extra information about objects, have to be displayed at the same depth as the object they're targeting.

VR will need affordances to indicate what element is interactive and when this interaction takes place. The sensory display of those affordances should scale with technology just like screen affordances. A highlight that now occurs on gaze, should still work for hand tracking, micro-gestures or a mind event.

The user's gaze can be handled as a cursor to trigger interactions in the environment because in VR you always know where the user is looking.  Sometimes all objects are not interactive and users should be hinted which objects they can interact with and the contextual reticle can be a help in this case. The reticle should be activated when the user looks at any place that is approachable, exactly how the hover state works for web.

Photo: Transition between idle state and interactive reticles by Jonathan Ravasz in uxdesign.cc

The truth is that most UX/UI designers are unprepared for the coming changes in the industries, and VR is pretty premature. Designers needs to expand their expertise to different fields, such as psychology, architecture, sound design, lighting design, and physics, in order to be able to create fully controlled experiences, guiding users in VR by shaping the virtual environment in such way. In the future, VR will be a mainstream medium for content consumption and human interaction.