South by Southwest is not just a single thing. It is a collection of conferences, festivals and events that consume the whole of downtown Austin, Texas. Generally, the tech events we go to are neatly contained in a singular venue, where everyone is brought to socialise and enjoy a series of talks for a reasonable duration of 1-3 days. SXSW lasts for a good week and a half, takes over the city and throws everyone into a fascinating mix of inspiration and madness.

SXSW consists of 3 major festivals - Music, Film and Technology. Your badge usually allows your primary access to only one of those. It also provides secondary access to everything else. This way everyone can feel included. It started on Friday, went on for the whole weekend and then the next week. Towards the second weekend, it morphs into Music and Gaming events. 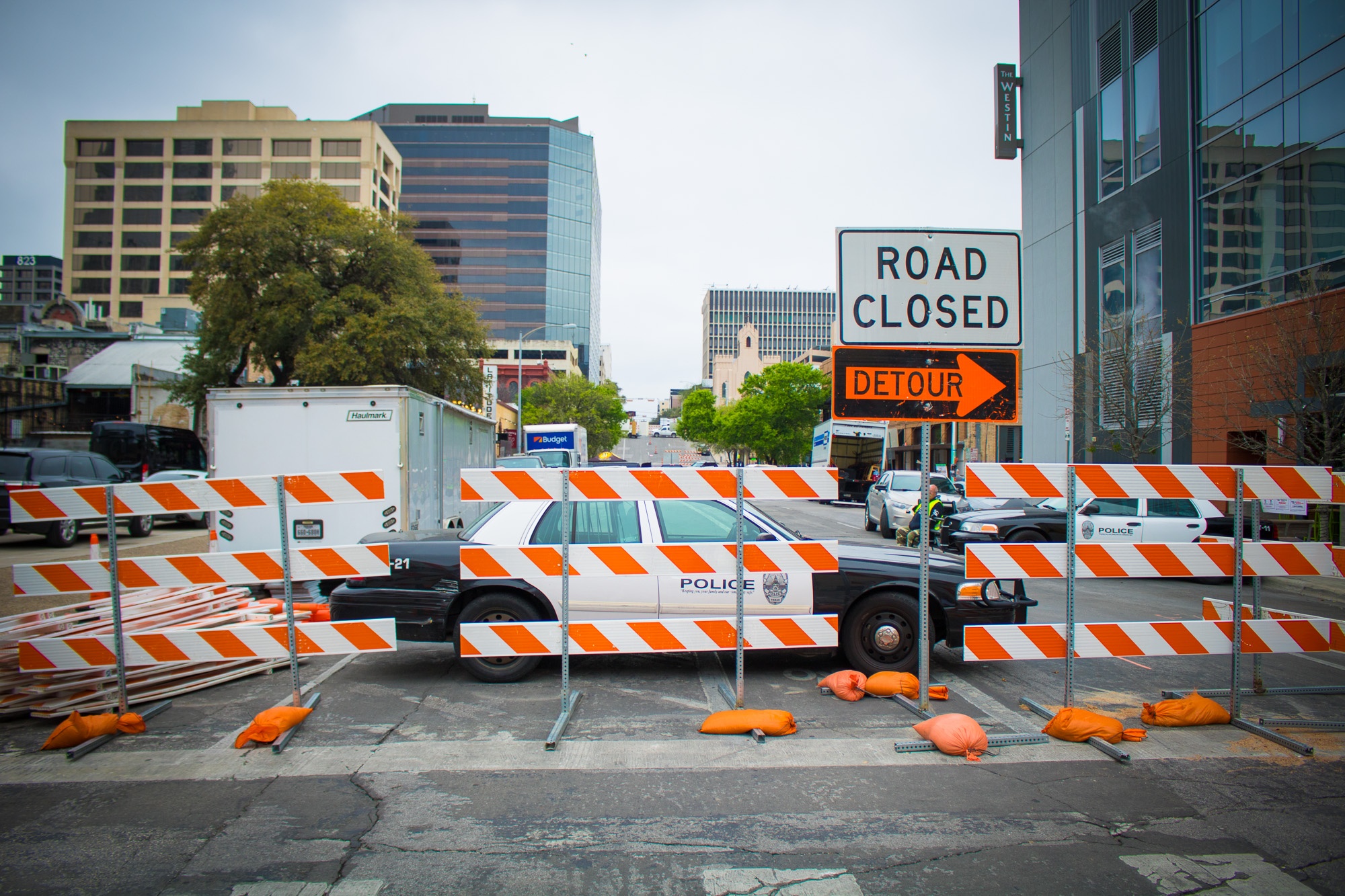 During these days the whole of downtown is literally transformed for the purposes of extra events. Streets are shut down. Buildings are built. If you are tired of talks, you can get out of the Convention Centre, get some tacos, and generally wander around things like Sony Tech Factory, YouTube creators studio, and Los Pollos Hermanos restaurant - straight from the Breaking Bad show. 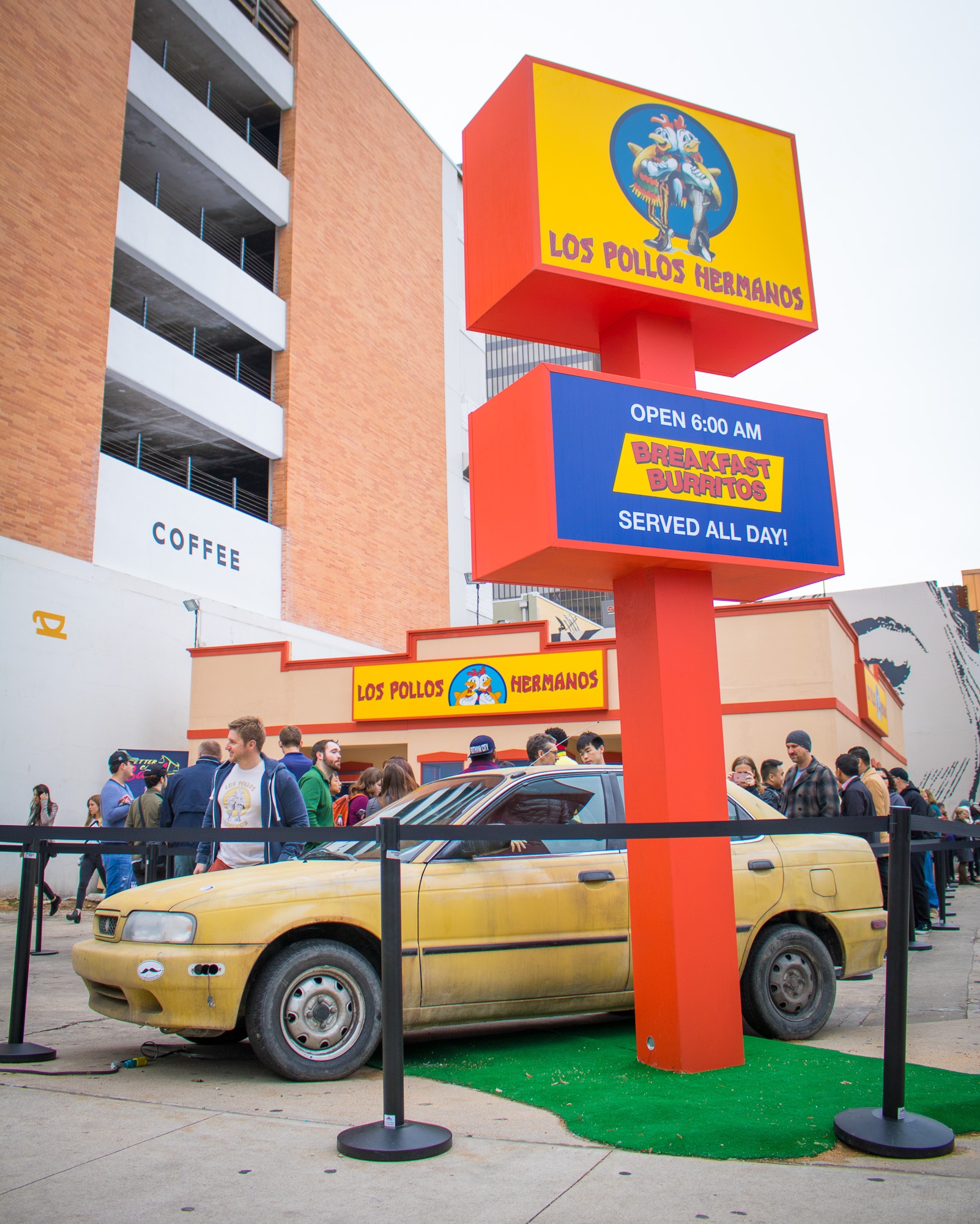 Everyone you’ll see around downtown will be either an attendee or somehow related to SXSW. Which makes random socialising very easy. A good icebreaker is - “oh I see you’re on tech track - what are you going to listen to next?” Each badge type has a different lanyard colour, so you can spot your tribe from afar.

Now we’ve got this out of the way, let’s get back to the tech track.

Selecting talks from a multitude of tracks and locations was not an easy feat. However, I feel like most of them revolved around a few large topics everyone is trying to grasp right now.

The big three - Google, Amazon, Facebook - are heavily pushing for integrating smart apps into the instant messengers they own.  This has made a bit of a hype now. Is the future full of conversational interfaces? Will you never have to (move the mouse) touch the screen again?

There is however a trend towards developers. Messenger platforms are opening up to 3rd parties so they would develop apps that could be used as part of an ongoing conversation between two humans. In Asia, WeChat is huge right now, and they too have created an ecosystem for bots. 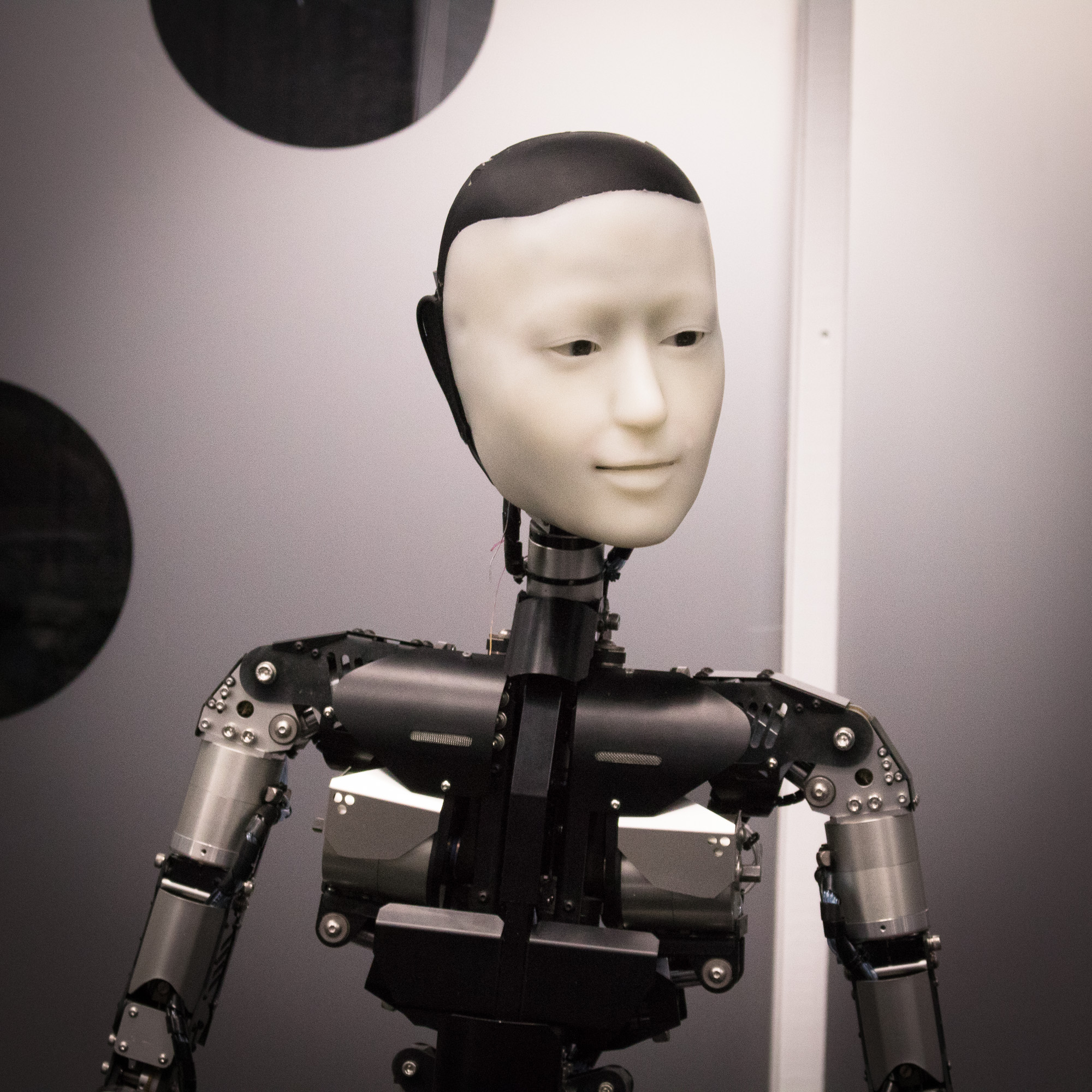 It is indeed a new kind of app, that in theory doesn’t ask from a user to figure out its graphical interface. All you need is to talk in normal human language - the same way as you would to a person. A conversational interface could eventually become something that will be more intuitive and accessible. You _explain_ your task to a computer, and it performs it. Some bits of this are already floating around - you can ask Siri to turn on the power saving mode instead of looking for that switch deep in the Settings app. We have even piloted a small Alexa app at Red Badger. The impressions so far are somewhat limiting, and users still have to learn the _correct_ way to communicate with the bot. 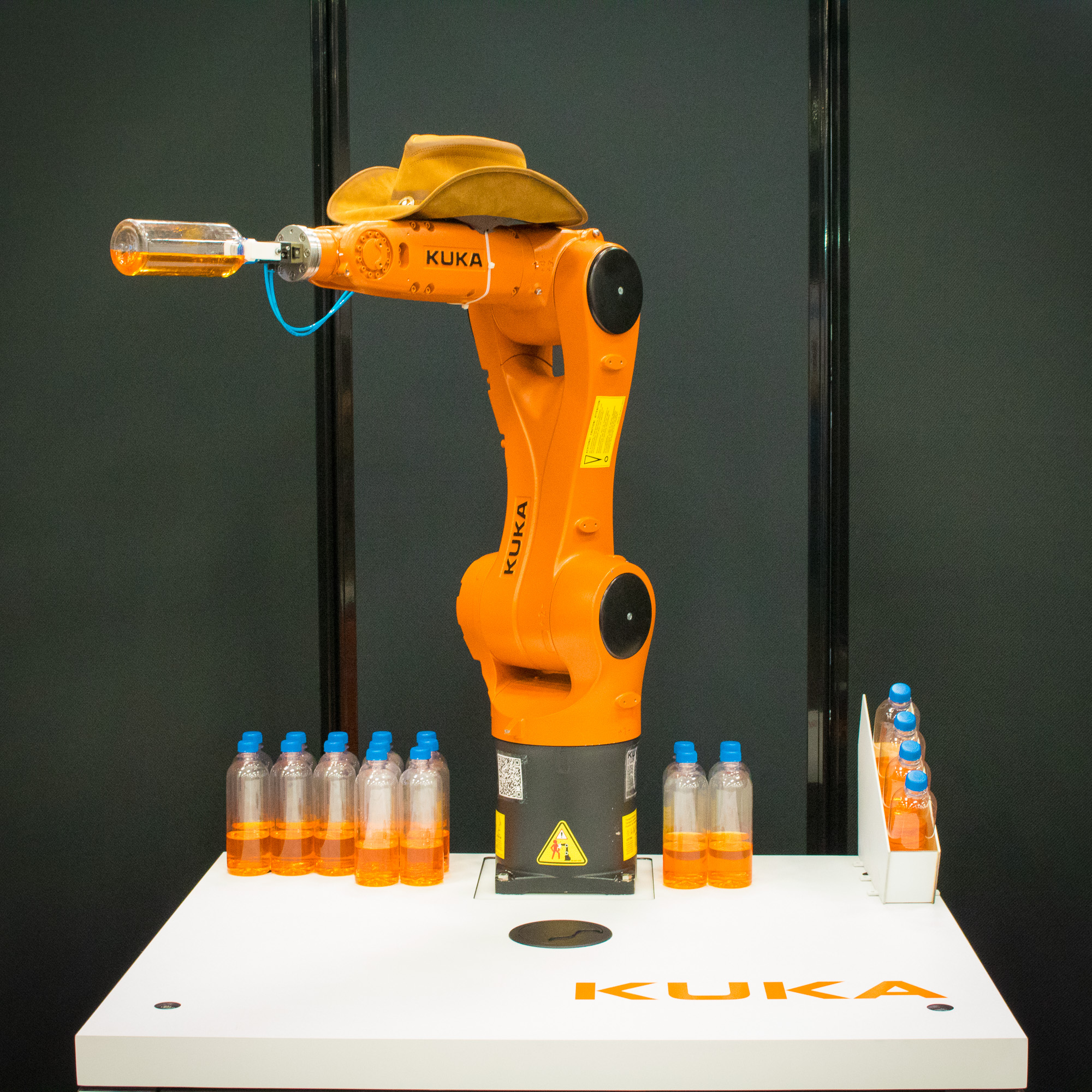 Some robots are more approachable than others

One positive impression though - SXSW mobile app had a built-in chatbot where you could ask any kind of question related to the schedule. I found myself asking it about events happening right now in the room next door - and it worked just fine!

Somewhat related to the IoT idea, wearables are gearing up in popularity and measurement accuracy. Most of us are having steps counted every day thanks to the phone in our pockets. If you have a smartwatch, chances are it can also count heart rate. All this information is saved, stored and can be traced back, aligned with actual life events. This all leads to the general idea of Quantified Self - when all aspects of personal life are tracked and later used for a number of purposes.

The idea is that eventually, you’d be able to use this data when you actually need medical help. In order to make a diagnosis nowadays, doctors need to either consult with your medical history - which is often inconclusive or missing - or spend precious time on tests. Assuming that the measurement accuracy will be accurate enough, wearables could provide this information.

I was lucky enough to attend a talk where Stephen practically live coded in front of the audience for a good hour. And then he stayed after the talk, and a bunch of us chatted to him about everything.

In addition to Mathematica and Wolfram Alpha, they have just launched something called Wolfram Open Cloud. It is effectively a cloud-based IDE that allows you to code web applications in Mathematica language. The Cloud (tm) will provide you means to create a RESTful interface, which effectively allows you to create small Mathematica-based apps and use them everywhere. This is effectively the same idea as with AWS Lambda service. Wolfram platform also provides your apps with curated sets of world data, on which you can perform calculations.

One powerful idea behind all this is the tools they try to make available for “normal people” to tinker with. Machine learning and neural networks are trendy words nowadays, but even the simplest neural network tutorial quickly jumps into heavy algebra, which requires quite a bit of investment on your part. In the recent update to Wolfram Language, you can now declare a small neural network and train it using 4 lines of code.

CIA on training teams with board games

CIA did a few talks during the SXSW (they were hiring too). One of the talks I attended was on a topic of effective training of data analyst teams. The way they do this is board games. Often - card games. They develop various scenarios and allow teams to play through.

In the real world (IRL) situations can develop in many ways, all of which are hard to predict. Let’s say you need to build a spy satellite. You are constrained by weight, budget and time before the launch window. Teams have to play and decide if this is going to be a single spy satellite with a bunch of sensors, or maybe it is going to be a constellation of small satellites working together to achieve the set goal. Then, over the course of the project, a “reality check” card would be played. For example, if Congress decided to cut the budget in half. How would the team behave? What kind of human behaviour would emerge from team members? Would they adapt and learn in time to deliver the project?

I believe effective teamwork is something that is impossible to learn from books - humans are incredibly complex machines and communication sometimes is very hard. But board games - according to the CIA - can be designed and played through relatively quickly. Another reason they prefer board games to computer games - you can design them much faster with relatively tiny costs.

You would think Niantic Labs knows a thing or two about location based games. And they do. Before Pokemon Go exploded, they did something called Ingress. And they have plans to deliver more games. But the angle of this talk was on how you can influence the real world with AR and location-based games. As it turns out - a lot.

One of the issues with the real world is that people tend to congregate in a few selected places while leaving most of other public spaces ignored. Using location / augmented reality based incentives you can effectively shepherd people into geographic locations they wouldn’t normally go. You can distribute the load on public spaces, national parks or even bring a positive economic impact onto a tsunami-affected region. As opposed to the tech allowing you to escape reality, they call this tech helping you to embrace reality.

Another aspect of this is an extra layer for socialising with other people in the real world over something that is happening in your augmented reality. Socialising skills are not something lots of us possess naturally, and AR can help a lot here.

A talk on growing engineering culture

Marty Weiner, founder of Pinterest and current CTO of Reddit gave a brilliant talk on growing and nurturing engineering culture. I didn't attend the actual talk, I've only seen the slides and I'm hoping to catch a full recording later. He talks about problems tech companies usually experience when they grow from a group of founders all the way to around 150 engineers. He also gives concrete examples how to hire right people, how to fire wrong people, how to manage engineers and how to effectively communicate.

A couple of years ago he gave a talk on Scaling Pinterest which is also pretty spot on.

The art of picking the right talk

Even if you limit yourself just to the technology tracks, the choice quite often would be overwhelming. Picking the right talk or panel at SXSW is an art in itself. A few things can help, like doing a bit of research into the speakers of potentially interesting talks or panels. Planning your moves is also important. Most of the tech talks were located in the Convention Centre plus a couple of hotel towers (relatively) nearby.

It turned out to be important to have a plan B. Quite often I would find myself standing in an enormous queue with slim chances of getting in. A good 40 min - up to 1 hour before a particularly famous talk is a good time to start queueing. But even if you didn’t make into the room, there’s always something happening in the next room. The abundance of choice played some tricks on the attendance, and while some rooms would be completely packed, others could be very much empty.

Each talk was allocated a full hour of time. This also led to an interesting behaviour - people would queue, then get in and try to measure how interesting the talk is within its first 5 minutes. If they start feeling bored, many would start looking at the schedule and finding their way out of the room to try the next one. In some cases, a fully packed room would be half empty within the first half an hour. It is also hard to blame the attendees - the feeling of an even slightest waste of time was unbearable in that ocean of options which SXSW absolutely was. 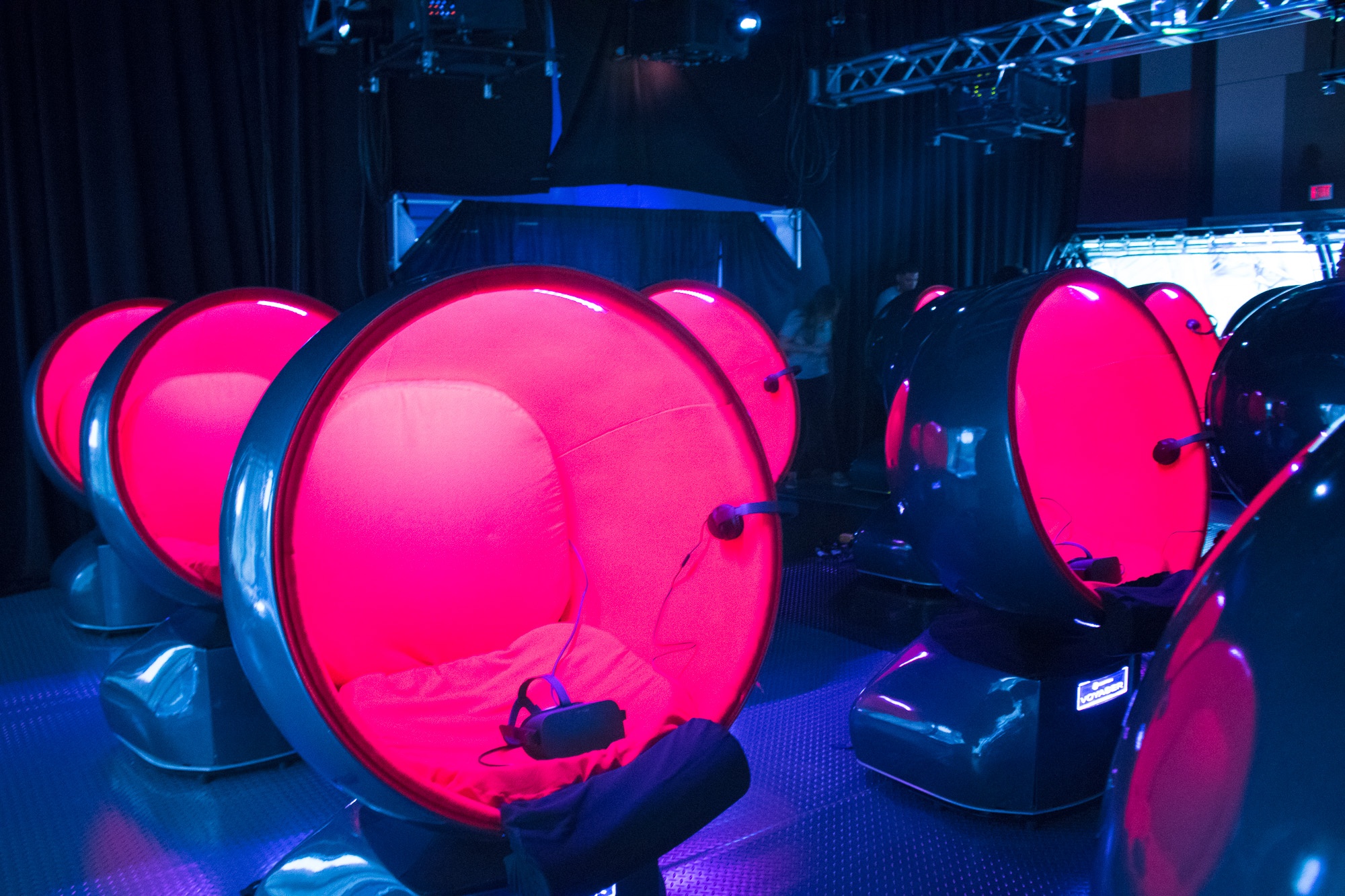 And yes, sometimes you would have to make a choice between a talk by Ray Kurzweil or Stephen Wolfram.

In addition to this blog, don’t forget to check out my daily vlog episodes on SXSW 2017. Covering talks, exhibitions, robots, celebrities, props from tv shows, VR and some droning over the Colorado River for the desert. Yes, I brought my foldable drone all the way from London.

We have also recorded a podcast episode on Radio Badger. All 5 of us - Melissa, Zoë, Monika, Robbie and myself got together and talked about our experiences over that mad week in Austin. Check the full episode - and don’t forget to subscribe to Radio Badger on iTunes!

Huge thanks go to Red Badger - our company who paid for our SXSW tickets, flights and accommodation. If you decide to join us, you will get your personal training budget, and might well find yourself at the SXSW 2018! 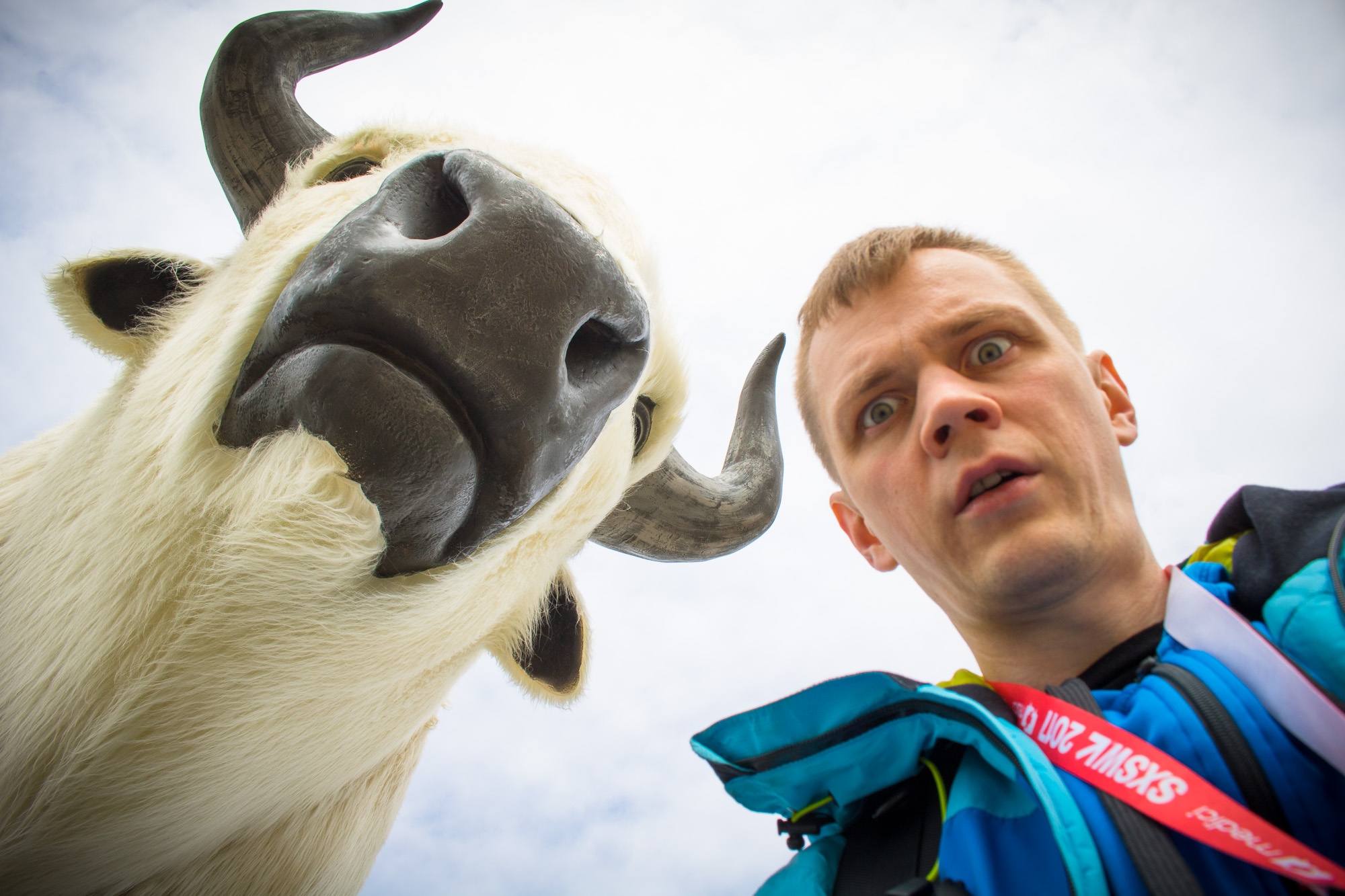 Selfie with the Great White Buffalo