Art Ink by Tiger Beer: The three things I loved and the one I didn't

Last week, I was invited to speak to some of the industry’s most creative people about innovation. Specifically, I was asked to choose one of the thirty or so shortlisted entries to Cannes Innovation Lions that didn’t win and openly discuss what I liked or disliked about it. “Why me?” I wondered, but thought it would be fun.

Leaving my homework until the 11th hour, I spent an hour or more watching films about incredible innovation covering everything from health tech to theatre to drones. The one that stood out for me was a submission for Art Ink by Tiger beer. In a nutshell, it converts carbon from exhaust pipes into ink for artists, reducing air pollution and creating a positive message through art. Awesome right?

Take a look at the showreel.

Ooh Tiger.  What I loved.

The bold, brand brief - too often brand campaigns suck or we think the product has to have a forced role within the campaign - for example showing someone, not so subtly, drinking the product. This campaign by Tiger was about street culture and sustainability - I’ve already learned something new about Tiger’s positioning from doing this. High five to the client.

The agency looked for an authentic solution and nailed the brief perfectly. They partnered with the scientist behind the idea to reach a bigger audience while using his innovation commercially and giving credibility to the solution for Tiger. High five agency.

I also liked how they connected with real artists in key cities. OK, so we all know the real artists have been pushed out of Shoreditch and it’s only for tourists now. But, it’s still young and creative there and the footfall in the area meant the art would be seen and Tiger would be visible. They’re trying to sell beer too let’s not forget.

It was a truly integrated marketing idea which had great PR reach, activation and advertising, digitally and in the real world.

Cycling past the billboard on Old Street daily, I didn’t understand that the campaign had this innovation behind it. Could it even be achieved here? I’m unlikely to reach for my phone to ‘find out more at…’ so could Out Of Home do this and if not, why use it?  I don’t know but it feels like a missed opportunity.

An own goal here, it was only a campaign. So, there was no commitment from Tiger to continue taking their carbon emissions into ink despite them already making 770L of ink and preventing 220 hours of CO2 emissions. Why stop? I don't get it.

I’m sure it would be a huge undertaking but they could start small. They already had. The important thing is they could be making a difference. It’s not too late Tiger. You can own this. If not, someone else will. By all accounts Anirudh Sharma, the scientist was brilliant and if he’s not, he should be crowd-funding the idea.

I'll chip in to save the planet. 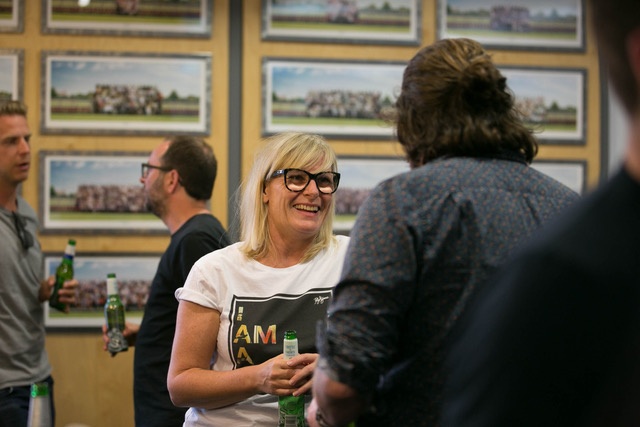 Andrea is a member of Innovation Social and much better at drinking beer than talking about it in public. Check out her shoddy microphone ownership and what else was discussed here. Debbie Harry she aint.

If you're interested in marketing opportunities at Red Badger, let me know, we're hiring.