I did good - A simple way to celebrate success 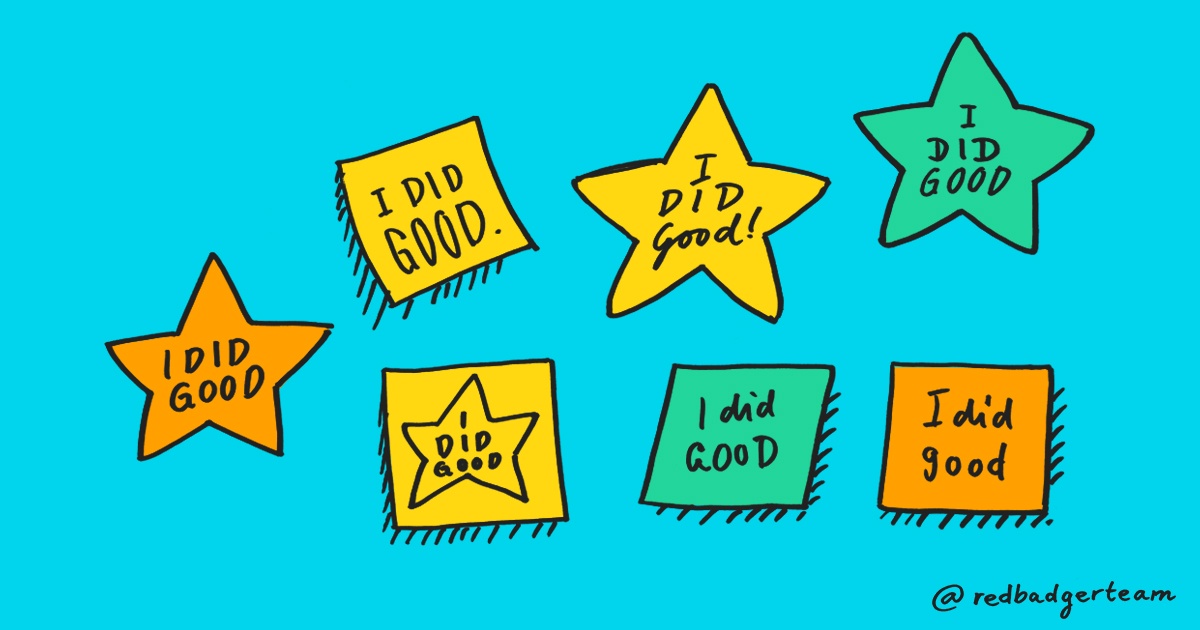 I don’t think we spend enough time celebrating successes in teams, so I created some super simple stickers that did the job.

It was a bit of a throw away at the end of one of my retrospectives. I remember thinking it would be nice if there was a way for the team to celebrate successes of their teammates, so if we had a spare ten minutes we can do it at the end. Ending a retrospective with a buzz appealed to me, as they are usually tiring sessions with a lot of intense discussion.

I swung by the stationary cupboard and found the most boring plain stickers imaginable. I started to write on them with a sharpie, “Well done’ - hmm that's a bit boring, how about “I Did Good”. That made me smile. I liked the strong but simplistic phrasing, and how it made me think of the declaratory pride of stickers you used to get when you were at primary school. Let’s see what they think.

My team are an easy going bunch and are very forgiving when it comes to trying out new ideas. Perhaps with a different team it would have been shot down immediately, but my lot gave it a go. So at the end of the retrospective I explained the activity.

‘I want us to take 10 minutes to let our team members know where we think they’ve done an awesome job over the last few weeks. So what I’d like you to do is to give someone an “I Did Good” sticker and I want you to tell everyone what is was specifically that person did good. I’ll go first.’

I then proceeded to give someone a sticker, stating clearly to everyone why. Then everyone else did it as well. The reasons ranged from project related extra effort, to gratitude for helping explain a new technology to getting the ice creams in. It didn’t really matter what the reason was. The act of individuals very deliberately letting someone else know they were appreciated and ‘did good’ was pretty awesome.

Before we left I encouraged everyone to keep their sticker on until it falls off later in the day. The purpose being for others to spot the sticker and to ask them, what did you do that was good? By repeating the encouragement of their teammates it should further reinforce what it felt like to receive it in the first place. And do you know what some people did? Some took them off after they left the room, some kept them on, or stuck them to their laptops. As it had been sincerely written by everyone, it definitely meant something of real value to the team.

I’m not suggesting that at the end of every retrospective you need to hand out stickers. I’m not suggesting that teams only need a couple of stickers to motivate them. That’s not what this is. What I am saying is that taking some time out to celebrate achievements on an individual basis is powerful. Knowing that you have been ‘seen’ and appreciated by someone else in your team is a key part of building trust. Trust is something that great teams need to deliver complex work. This exercise was about giving some dedicated time and space to let this happen, and to amplify the everyday support the team gave each other anyway.

This could be achieved in myriad ways, but I’d challenge you to experiment with a ten minute activity that enables your team to celebrate success and give it a go. Now I just need someone to give me an “I Did Good” for writing this…

If you’d like to receive an “I Did Good” sticker check our jobs page, we’re hiring. I will personally present you with one if you did good enough to get hired. See you at HQ.