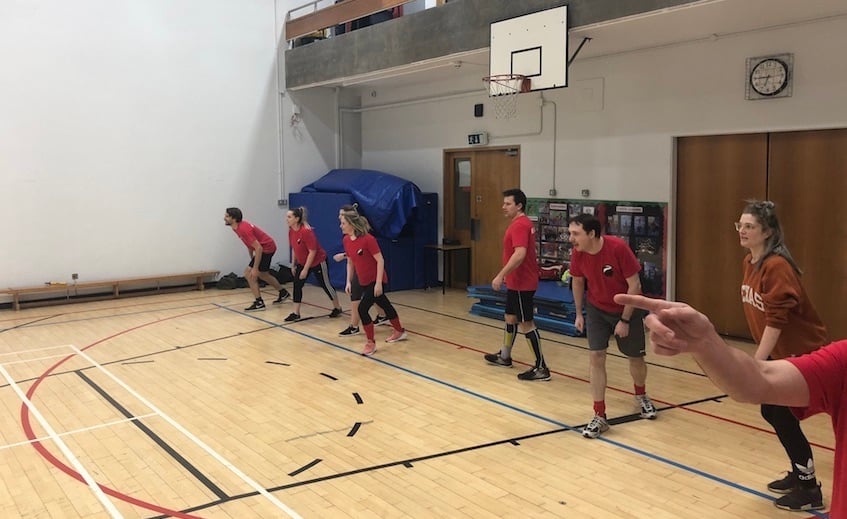 If you’ve been paying attention to our Instagram over the past few months, you’ll have seen a few appearances by our resident dodgeball team. Alas, due to injuries (Tracy “Woo” Wu - knee; Andy “Cheese Thumb” Craig - dislocated aforementioned thumb; Andrea “We want” Moore - Hamstring) and big money transfers abroad (Harri “Wednesday” Adams - lucrative 6 month loan deal in Vietnam; Sam “Walter” White - India’s latest dodgeball superstar), this season has been one of transition. And by “transition”, we mean “losing every match so far”.

Enthusiasm remains as strong as ever though, and bolstered by some promising new additions to the team, including “Professor” Xavier Delamotte and Tom “The Reaper” Grimley, our dodgeballers once again set twinkling feet on the hallowed boards of City of London School for Girls’ gym - the spiritual home of Dodgeball.

In front of a record attendance of five, things got off to an inauspicious start as adverse weather conditions held up the team bus, stranding “Curious” Georgia Cosslett and “Nimble” Matt Craig and leaving Let’s Talk About Setts, Baby (hereby known as LTASB) initially shorn of valuable substitutes. Indeed, Nimble Matt only managed to appear in two games of the last set, resulting in his manager privately questioning his commitment to the cause (conveniently ignoring Matt’s arctic journey from Liverpool).

The aggressive “throw first, think later” approach of the opposition took LTASB by surprise, whose unsuccessful “think first, throw later” policy once again failed to pay dividends, leading to a couple of early setbacks. Big throwers Joe Paice “Invader” and Professor Xavier couldn’t stem the tide despite their best efforts (and fevered chants of “Allez! Allez! Xavier!” from the sidelines), and seeing the Badgers outnumbered became a familiar sight in the opening games.

The seemingly endless stamina levels of Ingrid “Iron Lady” Olmesdahl and the valiant defensive work of “Kamikaze” Joey Green prevented any whitewash though, and LTASB began to show what they were capable of. The snake-limbed Jon “The Whole Nine” Yardley was soon avoiding balls like a losing lottery ticket, ably assisted by Laura “The Marchioness” Hasting marshalling the back of the court with a regal air of serenity.

Defeats became less heavy, and with the rapturous crowd supporting every dodge, duck, dip, dive and dodge of the agile Badgers, we started to register some game wins on the board (unfortunately, the elusive set/match victory remained tantalisingly out of reach).

Curious Georgia was now on court, lending her usual mix of high energy and passion, and LTASB were now performing close to the levels of their 2017 mid-table heyday. Chris “Bruno” Brookes put in a vintage display, owning the left flank of the arena like an unchallenged dictator in an election year, and The Grimley Reaper and Paice Invader were displaying footwork that would have Fred Astaire two-stepping in his grave.

In a match littered with highlights, a tremendous overhead catch by Kamikaze Joey was the pick of the bunch, redolent of a hungry bear snatching a leaping salmon in a babbling stream. This brought The Marchioness skipping joyfully back on to court, only to be cruelly cut down three strides later by a dodgeball arrowed at her legs by the opposition’s aggressor-in-chief, The Man In Green.

Not to be outdone, Professor Xavier set a new record for Dodgeball’s shortest ever court return, struck with a cannonball the moment he stood up from the bench after another excellent Badger catch. It was these unlucky breaks, coupled with an honest approach to ejections, that ultimately cost LTASB their chance at rescuing a win.

Nimble Matt’s belated appearance for the final throes/throws helped the Badgers take the last set to a deciding game, but with the oppositions’ penchant for bending the laws of physics to avoid the barrage of LTASB rockets (which quite frankly, seemed a bit unfair), it wasn’t to be.

As the subdued crowd filed out the arena, their mutterings seemed in general agreement that LTASB had registered a moral - if not actual - victory, which would stand them in good stead for the remaining fixtures. Indeed, word of their exploits and good sportsmanship had clearly spread, with the owners of a local watering house particularly keen to host them by offering a tray of free drinks. The dodgeballing Badgers begrudgingly (yet gratefully) accepted, before seizing the opportunity to plot victory next week. Allez les Badgers!

Next fixture: Let’s Talk About Setts, Baby vs MUFG.