International Women's Day 2018: A thank you 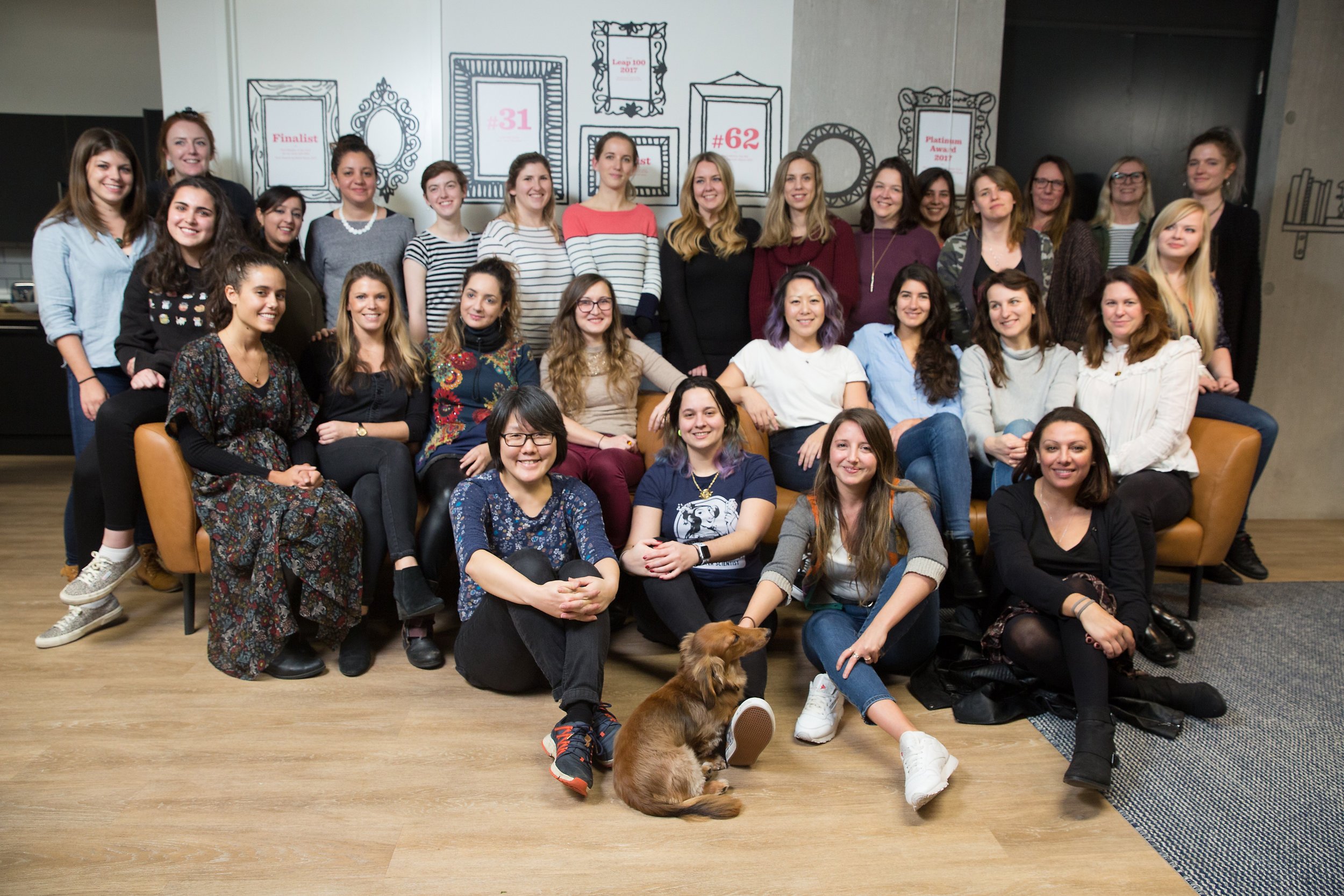 We’re a diverse bunch at Red Badger. We’re proud of how many different countries we can collectively call home, and our COO David Wynne has previously written about why gender equality matters. We’ve even got three gingers (myself included. And Milo).

This is something that can be all too easy to take for granted though, which is why events like International Women’s Day serve as a great reminder of why diversity in the workplace is so important. Not only that, it gives us the opportunity to reflect on what it means to us - both as a business and at a personal level.

It was in this spirit that we all received a survey last week, asking us about the women who inspire us at work and in the world around us. As one name became four names, became eight then twelve then more,  it rapidly dawned on me how every stage of my journey with Red Badger has been influenced by the brilliant women I work with, and I started to feel strongly that this was a story I should share.

So, what follows is an unapologetic thank you, with a few examples of why I’m continually humbled by this phenomenal group of people.

My first encounter with Red Badger was in my editorial days at Sky, back when I thought Trello was the name of a family-friendly board game and throughput was a particularly skilful golf shot.

I didn’t see ever myself leaving the world of words, but then Red Badger came along to build our new CMS and I had my Sliding Doors moment (great concept, dreadful film). I began to take an active interest in the burn-up chart detailing the weekly progress, and specifically how the data was being used to forecast delivery dates.

The project was being managed by Olga, who navigated the oft-stormy stakeholder waters with an unshakeable calmness and reassuring authority. She was everything a delivery lead should be; projecting absolute certainty in the methodology underpinning the project and the team’s ability to deliver it, while being able to answer any question that I fired her way. If it wasn’t for working alongside Olga and the Sky team, I would never have accepted the offer of a 12-month secondment as a Product Owner at Sky, which would prove to be my tentative first steps towards a change of career.

Fast forward a few years and I’m sat in a Thameside cafe with Shelley on a late summer’s weekday morning, discussing my next move during a six-month career break. She’s outlining how I could potentially fit into the delivery team at Red Badger, but I’m trepidatious. Not only have I never done the role being proposed before, I’m fully aware of how talented a workforce Red Badger is - always a daunting prospect when starting a new job.

Yet Shelley assuaged the concerns I put to her with such enthusiasm and positivity that I left our chat full of green tea and a burning excitement to get started (the burning may also have been the tea). Crucially, she promised a level of support I’d never experienced before (one that continues to this day) with training, mentoring and the freedom to learn from mistakes. Having someone show such confidence in you is utterly liberating, and played a huge part in the shift of mindset I wrote about last year.

After I agreed to join, my first contact was with Val to sort out which computer I’d like (my considered answer: “A Macbook. The biggest one”), and on the big day it was Amy who warmly welcomed me, settling any nerves and making me feel like I’d known the office for years (in fairness, I had. Christmas Party 2014. Unfortunately, there are photos). For the rest of that week, Saadia’s infinite patience didn’t waver as I pinged over questions about passports, printers, and pensions (as of this week, I can add post-its to this alliterative list too).

As one of the incumbents on the affectionately-titled “Operations Island”, Val has since moved into a finance role, but is the only person in the world who could possibly be Val (if you’ve met her, you’ll know exactly what’s meant by that - and how positively I say it). Without Amy and Saadia, Red Badger simply wouldn’t function - they’re our beating heart, spinning so many plates with such serenity that their efforts often go unnoticed, but never unappreciated.

Natalie started on the same day as I did, and has been my line manager ever since. It’s been a perfect fit - we share Sky on our CVs and a love of reading that has us continually threatening to start a Red Badger book club (which I’ve assumed we’ll call Read Badger). She’s got an unerring knack for knowing almost before I do when I may need a friendly ear. For how she constantly points me in the right direction, I’m forever in her debt (quite literally too, if she ever backdates all of our coffee trips to Lantana).

Once Natalie had helped me pick some valuable training courses, I was paired with Lani to work on my first delivery project. Despite her being an Arsenal fan (one of only a few Badgers who holds a strong interest in football), we hit it off straight away, and it was immediately apparent why Lani was seen as the ideal person to learn from. She’s a natural leader with a fierce commitment to doing the right thing - never more evident than in her single-handed efforts to create the Red Badger Social Value task force, which has already achieved so much since its inception. Lani is the embodiment of what we aspire to be when we talk about company culture.

In the present, I’m now the Delivery Lead for the Fortnum & Mason project, and count Nico, Monika and Etiene as part of our team.

Being the mother of Milo instantly renders Nico as irrefutably the most important employee within Red Badger, but to only mention Milo would be ignoring the sheer warmth that Nico inspires in everybody who works alongside her. Our resident Ecuadorian has worked on the Fortnum & Mason project since it began, and her experience and development expertise carry the utmost respect within the rest of the team.

As a tester, Monika is absolutely dedicated to breaking things in new and ever-more creative ways. A bit like Wreck-It-Ralph, if only Ralph casually did ultra-marathons most weekends with the same nonchalance that most people nip to the shops. She also has the strongest gif game of anyone you will ever meet.

Not content with being a successful full-time developer, Etiene has this year started studying for a Masters degree alongside her day-to-day work. Any downtime she has is spent attempting to translate an untranslatable book. And building her own keyboard. And making a light up dress. And becoming a certified open water diver. And producing homemade cheese. It wouldn’t wholly surprise me if she decided to combine the latter two just to make it challenging. Etiene’s unquenchable appetite for learning more has helped me realise how much can be achieved with drive and determination.

From axe-throwing to spoon-carving via trampolining (thankfully there’s no overlap in that particular Venn diagram), there’s are plenty of extra-curricular activities to get involved with at Red Badger.

As soon as Harri mentioned reviving our dodgeball team last year, I was eyeing up my new kit of sweatbands and lycra to intimidate/repel the opposition. Frustratingly, any dreams of international dodgeball stardom were snatched away from me when dislocating my thumb attempting a catch, but Harri’s eternally optimistic outlook and supply of medicinal Jaffa Cakes helped me get over my digit-based war-wounds, and she’s sorely missed while enjoying a dream six month trip across Asia.  Even in her absence, Wednesday night Dodgeball has become a Red Badger institution.

After witnessing their superhuman efforts at engaging with our wider community and hosting events on a seemingly nightly basis, I’m yet to be convinced that there aren’t in fact 3 different versions of Becca and Laura who secretly take it in turns to come into the office. Laura’s appetite to bring in the best people to Red Badger is matched only by her warm-heartedness and discerning Sonos choices, and while it’s probably best not to mention Becca’s musical proclivities, she is quite possibly one of the most engaging people you will ever meet.

Laura’s work with General Assembly has also given me the chance to talk to UXD students about cross-functional delivery, helping me realise that a little over a year since starting, I can now talk about what we do at Red Badger with a semblance of confidence and authority.

Back in that cafe in 2016, one of the worries I put to Shelley was that I didn’t know if I wanted to completely step away from writing. She reassured me there was every opportunity to get involved with writing blogs for Red Badger, and although I’ve not exactly been prolific up to now, Andrea and Nathalie have been instrumental in persistently encouraging me to come up with ideas (a polite - yet still grateful - way of saying “nagging”). It was their efforts in the lead up to International Women’s Day that gave me the impetus to write this.

Nathalie (along with Saadia) is an office early bird, and is one of the most talented editors I’ve had the pleasure to work with - made all the remarkable by the fact she’s writing in her second language.

Andrea is one of the other football fans in the office (but she supports Coventry, which doesn’t really count), and her combination of a no bullshit attitude with an amazing zest for life is a joy to be around. She throws herself wholeheartedly into everything she does, which goes some way to explain the dodgeballs you’ll now find strewn around the office, and has the unique ability to take the mickey out of me via every possible social medium.

These are just a selection of the 37 awe-inspiring women we currently have at Red Badger, and the people I’ve called out here are only mentioned as those who have had a direct influence on who I am today. So please, take a moment today to celebrate the women around you, and don’t be afraid of saying “thank you” for everything they’ve done.