The man who made the net, digital payments, and open offices 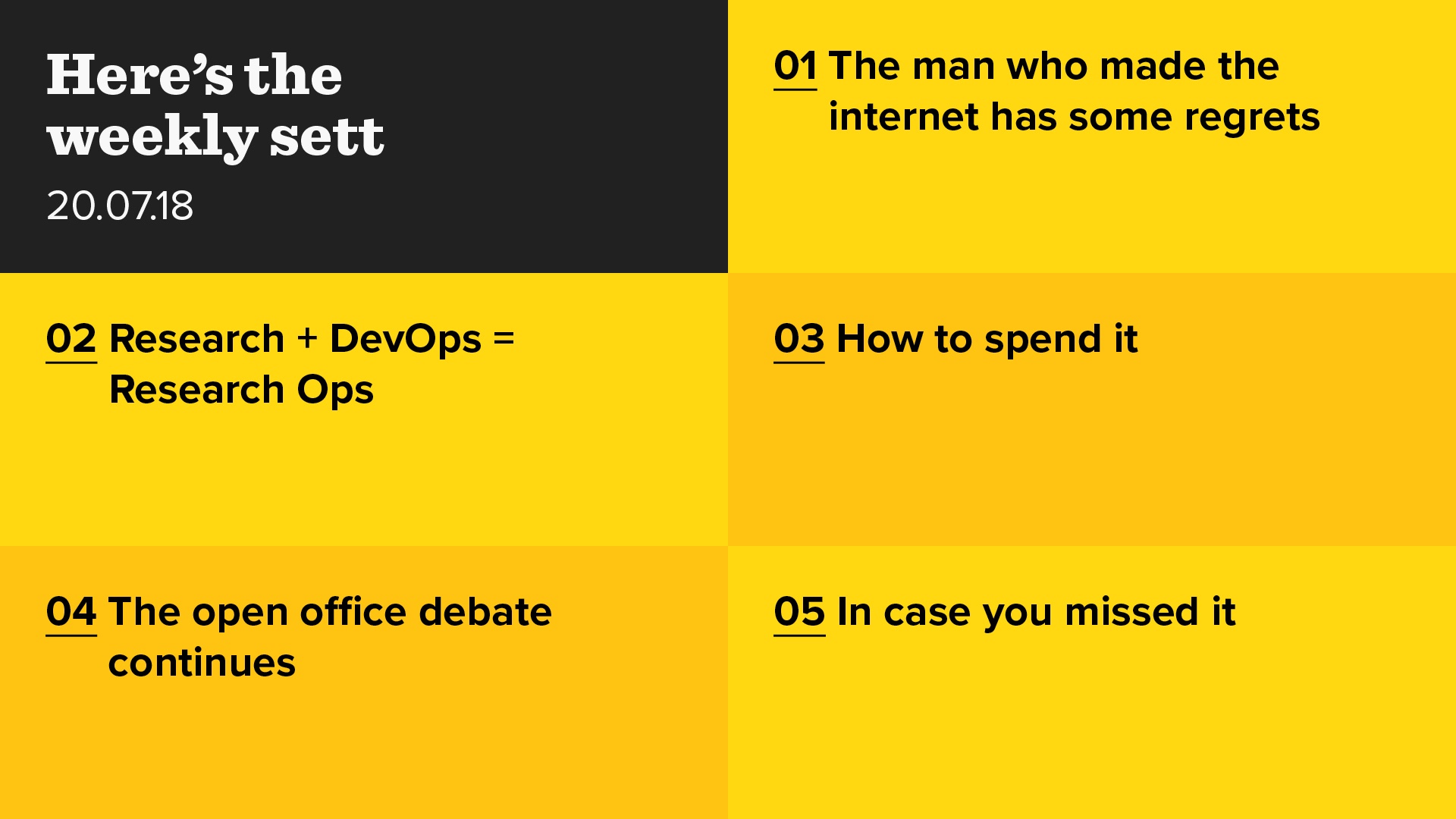 With football going home to France, tennis done, and the weather taking a cooler turn, we’ve had more time to get some reading done. Here’s what has sparked our interest this week.

Number 1 - The man who made the internet has some regret

Tim Berners-Lee, a name many, if not most of us know, launched the internet with the hope that it would be a collaborative space to cross barriers, and connect culture. However, this hope has waned and in an insightful interview with Vanity Fair, he has some regrets. However, three decades since he launched and gifted the web to everyone, he still fights for its intended democratic, transform-for-the-better, purpose and is looking for ways to return it to its original de-centralised form.

Regardless of your opinions of those who have built a new world on top of Berners-Lee’s invention, the interview is thought-provoking and a keen reminder of both the simple wonder and the devastating power of the web.

UX Collective has outlined a new discipline in the expanding repertoire of ‘Ops’: ResearchOps. While not technically a ‘thing’ yet, the method could bring about changes to the tired, siloed, and under-funded research departments/sectors. Overall, it aims to democratise customer insights, take down barriers to understand consumers, and make everyone take responsibility for creating remarkable customer experiences. Time for analysts to go agile.

Number 3- How to spend it

Across the pond in the United States, a new study has found that adoption and usage of digital person-to-person payments is not just limited to hip young things. Instead, it found usage is high amongst all generations, with consumers highlighting trust in friends and family, and trust in their banks as the primary reason to using digital payments. Read more about the study over at Finextra.

At Red Badger we love hearing and learning more about how ways of working are changing and how different office spaces can impact your work (*cough* here’s our research *cough*). However, a new research paper has found that face-to-face interactions decrease significantly (by approximately 70%) when an office moves to a more open space environment. The paper surmises that: “open architecture appeared to trigger a natural human response to socially withdraw from officemates and interact instead over email and IM.”

While we still favour the open-plan office for our line of work, you can read the paper in full over at the Royal Society Publishing, and maybe take a pause the next time you are about to click ‘enter’ on Slack.

If you were out and about in London on Wednesday you might have seen a certain statue by Tower Bridge. Check out who has been immortalised (at least until 26th July) over at BBC News.