In case you missed it, Wednesday was the International Day of Happiness, so for this Weekly Sett, we’re cranking up the feel-good factor. 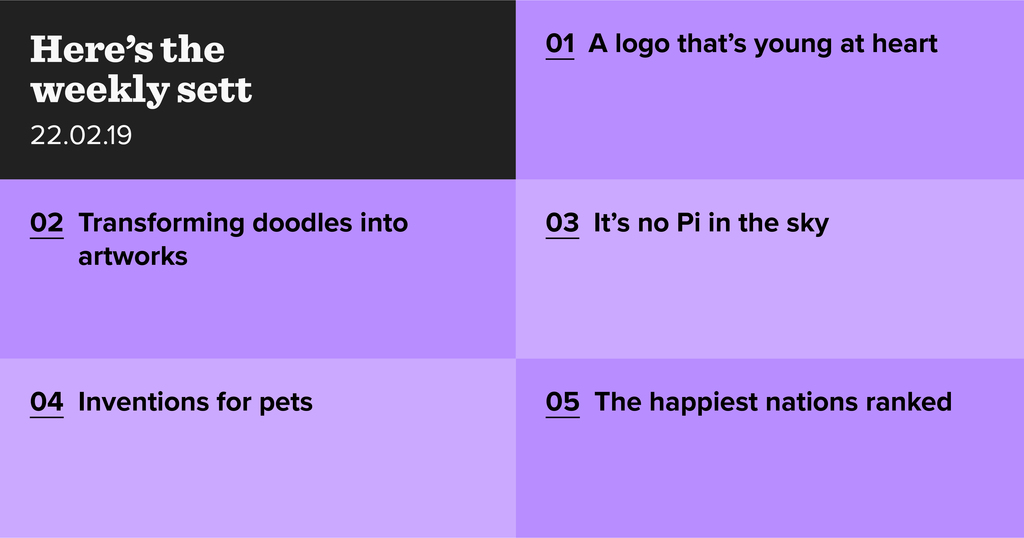 Number one - A logo that’s young at heart

If you’re a Londoner, you might have heard the hype around the Newington Green eatery, Jolene. The bakery, cafe and restaurant also has a pretty stand out logo, which you can see here. You might think, ‘well, that’s charming, but it looks like it’s been designed by a six-year-old’. And you’d be right, the logo was designed by a six-year-old - the son of the founder of the creative studio behind the design (Studio Frith). On top of that loveliness, the company promotes sustainable farming methods for future generations - so it feels apt. Read more over at Creative Bloq.

Tech company, Nvidia, has created a prototype software that transforms rough doodles into detailed art. The tech can generate AI landscapes instinctively and has been described as a “smart paint brush”. Read more about this picturesque tool at The Verge.


Number three - It’s no Pi in the sky

Last week was also National π day and Emma Haruka Iwao, who is in the high performance and programming languages communities at Google, used an infrastructure, by Google Cloud, to calculate 31.4 trillion digits of Pi (the previous record was 22.4 trillion digits). You can read more about it at Wired.


And in more pi-breaking news, a ten-year old boy from Gloucestershire, is believed to now be the youngest Brit to recite Pi to 220 decimal places and set the record at his school assembly. Charley Thomas rehearsed for a week before his performance, which you can read about in more detail over at the Telegraph.

Nothing represents happiness quite as much as an adorable pet. Just ask our office dog, Milo. For those that want to merge pets and tech, this Forbes article delves into the entrepreneurs keeping our beloved pets healthy, fit and safe. Inventions include a dog activity monitor, a solution to find missing pets and digital vet consultations.

And finally, Brits are getting happier - HOORAY.  The annual World Happiness Report has ranked Finland, Denmark and Norway as the top three, but the UK comes in at 15th out of 156, which isn’t too shabby. The report is super in-depth, so check out where your nation sits, here.