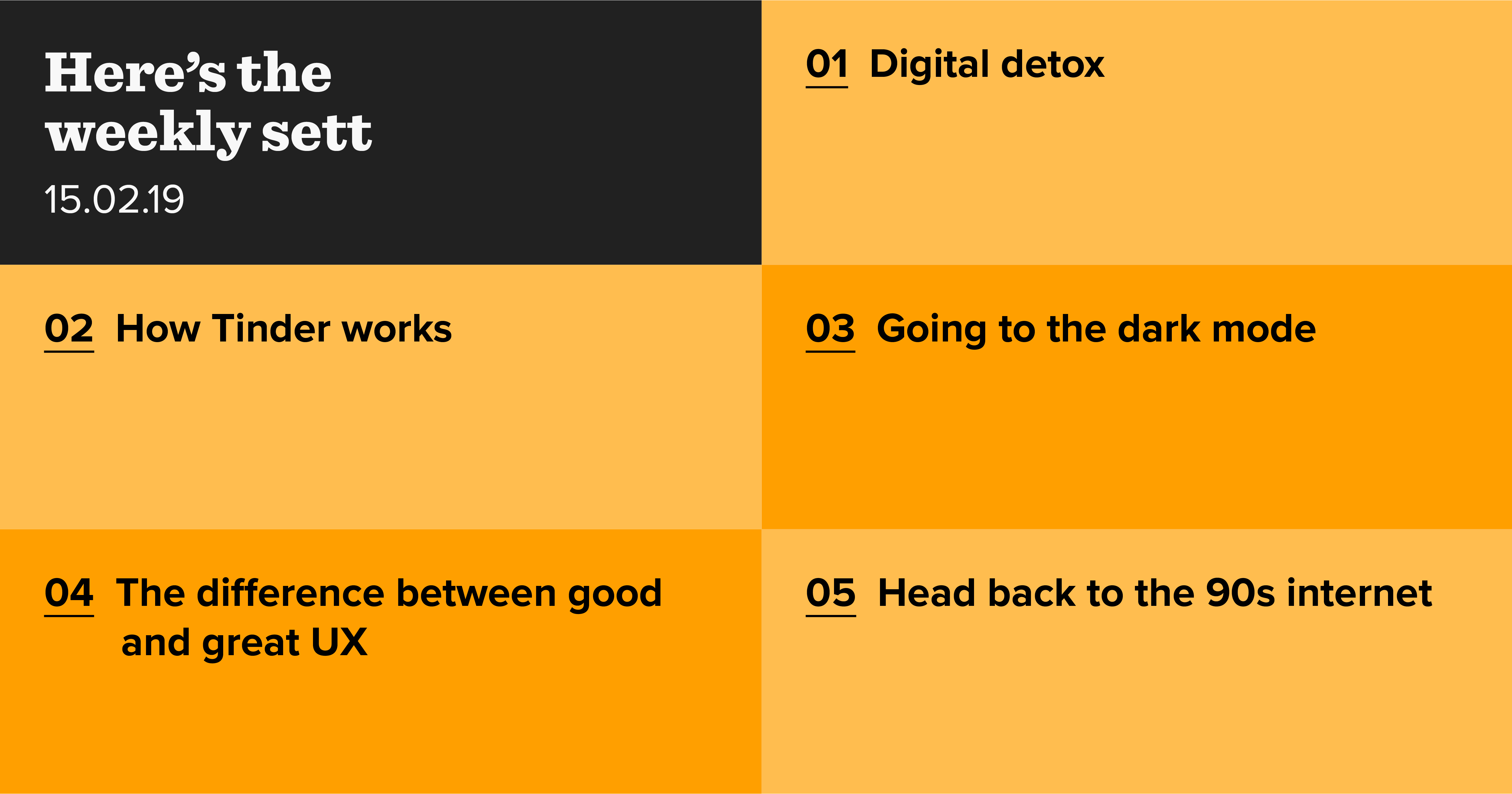 Today, Valentine’s Day, love is in the air everywhere you look around, in between the cracks in your keyboard, and behind your desk, next to that stale biscuit you dropped there a few weeks back. While we could share pictures and anecdotes of our loved ones, but instead we’re sharing some articles that we loved this week, and we thought you might love them too.

While many question the need for celery juice to detox, the need for digital detoxes is less questionable. As the internet and technology have passed through infancy and matured, their drain on our attention and time has increased significantly. Recode has outlined how you can cut this tech usage through digital detoxing; from a cold turkey 30 days ban, to even digging out your old Nokia to replace the high tech smartphone you’re maybe somewhat addicted to.

For those who are part of the lonely hearts club, dating apps might be a regular part of your smartphone usage. Globally there are over 57 million people using Tinder, but many don’t realise just how the app works. According to Vox, the world’s biggest dating app uses an algorithm (similar to the chess Elo rating system) to rank you against those 57 million other users based on how many right swipes (likes) you get and then shows you people on the same level of ‘desirability’ that you hold.

But comfort yourself, members of the lonely hearts, that this algorithm doesn’t include your winning personality, unique party tricks, nor devastatingly funny one liners that ‘always’ work.

Dark modes are growing in popularity, especially since Apple introduced it as part of MacOS MoJave. In light of this hype, user interface designer, Koos Looijesteijn, decided to have a gothic experiment and introduce a dark mode to his own website. He outlines in a blog post the benefits and the drawbacks in creating an alternative theme for his site. On one hand it can be beneficial to users by creating a better evening reading experience, but on the other, it can reduce the recognisability of the website in question and require a large investment that impacts all future design choices.

Number four - The difference between good and great UX

User experience (UX) means looking past first appearances and seeing the feelings and thoughts a user has about a product. However, Johannes Ippen, founder of Berlin design studio Human Deluxe, argues that we need to shift our view once more, away from UX and toward Human Experience. Instead of looking at a user through the perspective of the product or the company, you should consider the user holistically and humanly, beyond the parameters (and KPIs) of the product in question.

Number five - Head back to the 90s internet

Captain Marvel, the upcoming female-led Marvel superhero movie, has launched its website. While most of these websites are nothing more than a note on where you can see the film and some neat little images from the set, Marvel have taken a different track. The site comes straight from the 90s, with is design fitted out with awkward animations, questionable fonts, and garish colour choices. Learn more about the site (and its backend) over at The Verge.