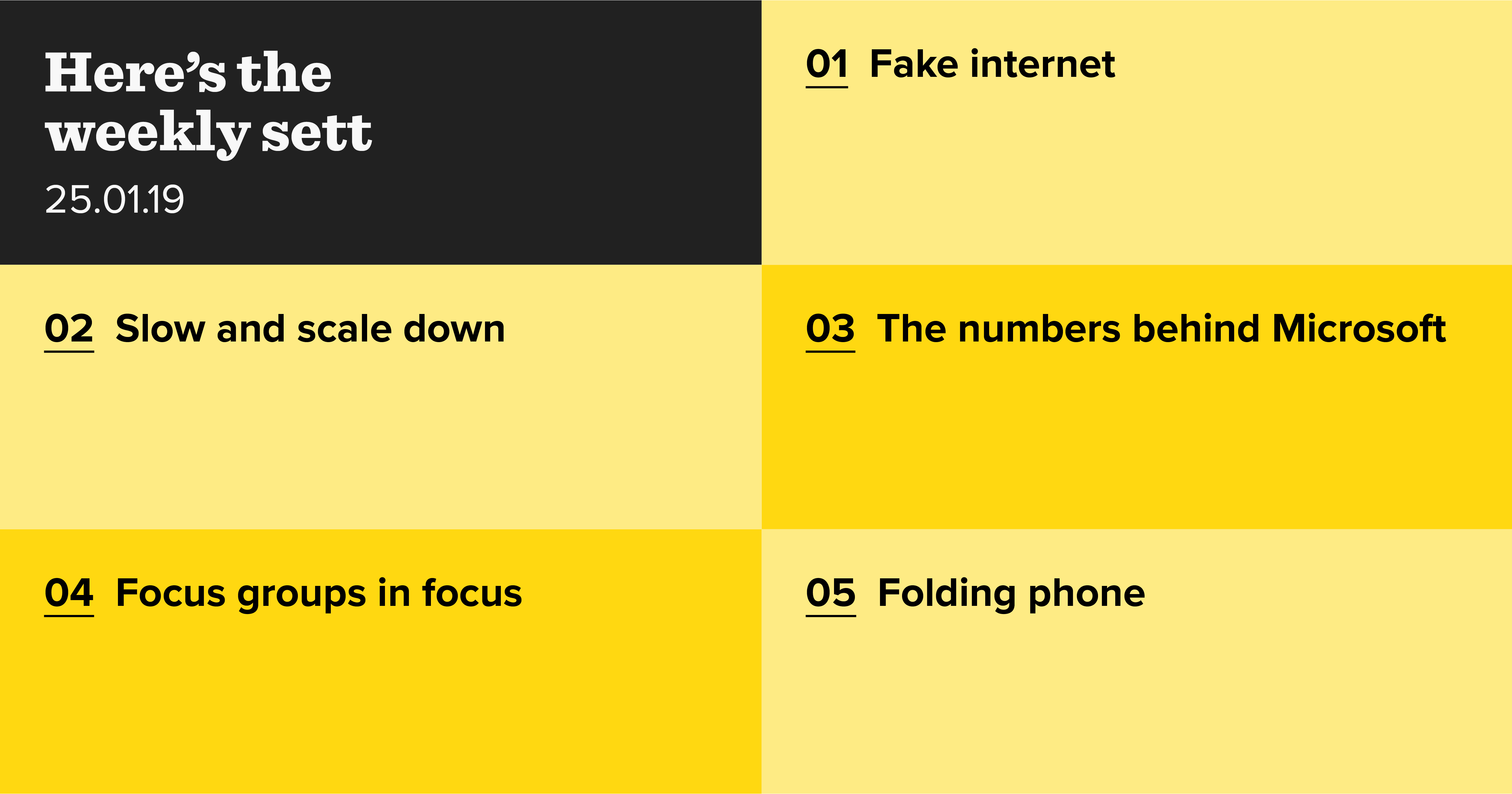 With only a week left of Dry January, Veganuary, Try January and just January, now is the time for distractions. So, get comfy and pull up the Weekly Sett to tide you over and help you forget the glorious taste of a glass of wine and a cheeseburger.

The internet is a big sprawling place, growing each day with more and more websites and content. However, just how much of it is real? Apparently, not a lot, according to NY Magazine. With money to be made from digital advertisers, many are using fake followers, fake websites, and fake website traffic to earn some cash, which could lead to bot web traffic overtaking human.

Number two - Slow and scale down

In this age of agility, speed is prioritised. How quick can you get to market? How fast can you build in features and fix bugs? Be swift or perish has become a mentality for many organisations and projects and Om Malik notes that instead of living at a human speed, we are now living life at the speed of the network, our timings and pace decided by data. However, he argues that instead, we should adapt and find ways to slow down time back to a human scale.

Number three - The numbers behind Microsoft

Microsoft has published ‘Microsoft: By the Numbers’ which outlines the figures and stats surrounding its work. This includes: the lowest sound level of its anechoic chamber, how much it donated last year, and the score its AI reaches in Atari 2600 version of Ms Pac-Man.

Your clicks, likes, and purchases are tracked and noted, and then combined with everyone else’s activity into an algorithm transforming it into big data. With this big data, organisations can create a firm, data backed, foundation for decision making. However, we still cling to the age-old focus group. Vox highlights that despite the predicted demise of such a research method, the focus group still thrives with an estimated $2.2billion spent globally on focus groups in 2017. But, the article also notes, are they truly the best representation of the public? Do they truly contribute to innovation? And begs the question: should we kill the focus group all together?

Everyone is looking to create something truly innovative within the mobile sector, and the latest gimmick comes from Xiaomi with a double folding phone. Both sides of the device can be folded backwards to transform it from a tablet to a compact phone. Check out the video of the device in action at The Verge.