Finding joy in uncertainty - Learning to ‘Improv your life’ 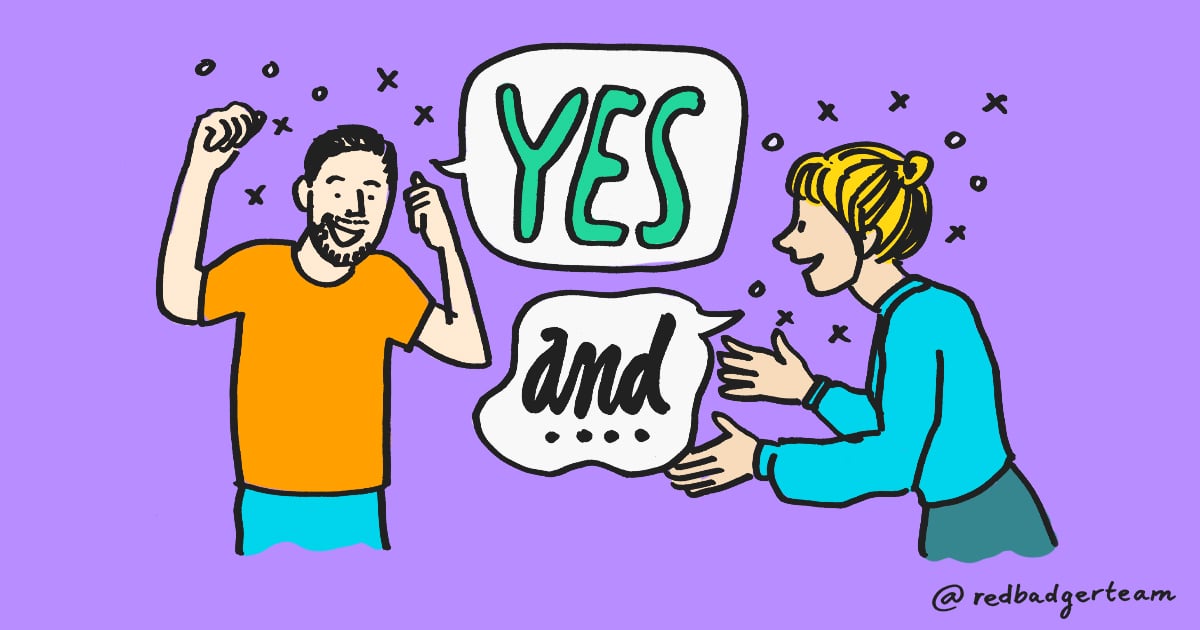 What’s always impressed me about improv comedians is their seemingly impossible ability to take a suggestion and not only run with it, but skip around with it in imaginative and unexpected ways. They’re able to create a world that, until that moment, was unknown to them and the audience watching. Even when things seem to go ‘wrong’ they keep going and, more often than not, create a moment that is way more entertaining than it otherwise would have been.

Personally, I find it difficult and quite scary to deal with the unknown. I’ve always envied members of groups such as The Comedy Store Players, Who’s line is it anyway, and The Showstoppers in their skill to embrace uncertainty and to take on the challenge of contributing to a moment - not knowing what will happen or where it will take them. I actively avoid new and seemingly scary situations due to anxiety and for fear of looking or sounding stupid. Recently, I came to the following conclusion: maybe this fear is holding me back?

I’d been listening to an excellent podcast called Conversations Against Living Miserably where Aaron Gillies and Lauren Pattison interview their guests about mental health, anxiety, and how they live their day to day lives without misery. In the episode with guest Pippa Evans, I learned about her course, Improv your life. Pippa created the course to teach improvisational skills which she found can help deal with uncertainty and the anxiety that ensues when not knowing how to react to an opening gambit such as “I ate a potato today!”. I booked a place immediately and as the course approached I started to wonder (with impending panic)… What have I got myself into?

I made my way to the small, endearing venue that had, in a previous life, been a car garage and is now a comedy performance space. I briefly introduced myself to Pippa and the group and in typical fashion, I found a quiet corner to hide in until the session commenced - I find meeting new people in a new environment terrifying. One of the main reasons for signing up to this course was to discover ways of overcoming the panic of not knowing what to say beyond “How are you?” and “Isn’t the weather glorious?”. So British. This, of course, is an unavoidable situation in improv. It wouldn’t be a very compelling scene if, two lines in, the conversation ground to a halt.

Throughout the two days of silly warm-ups, chaotic games, laugh-out-loud scenes and giving myself feedback in a corner (literally talking out loud to a wall), I could feel my inhibitions fade away & I began, slowly, to pick up the fundamentals of improvisation. We covered so much during this time, but I thought I’d share a few things that really stuck with me, which I plan on applying to everyday life.

Improv is all based around offers. The opening offer of a scene might be “There's a storm brewing captain!” or a physical action like scrubbing the floor. Both of these offers give you information to play with; how you choose to react moves the scene forward in a vastly different ways.

The simple act of saying ‘yes’, confirming that you have heard the person, accepted their offer, and then start building on it, is much more inclusive and positive than saying “yes but” or “NO!”. Blocking an offer prevents the idea moving forward, and can be strongly felt as a rejection which will stop people in their tracks. This, of course, has its place from time to time; in improv it’s better to agree and build on an offer rather than trying to force through your own narrative.

This resonated with me completely as someone who has, in the past, shut down ideas rather than exploring them due to one constraint or another. The feeling of having your idea blocked or rejected is not a nice one and something we have all experienced at one time or another.

It’s wonderful, and often hilarious, to see how a story unfolds when you both are in agreement and build on each other's ideas. This, I believe, is also true in ‘real’ life. The creative process works best when you work together to develop an idea, rather than railroading your own agenda.

Listening to disrupt, hear and ignite

The next learning is to listen, properly. This was illustrated through three exercises. If you are not actively listening you will miss key pieces of information which could be the difference between hilarity and failure. At the start of a scene you know nothing and without really listening you could miss something important. In order to build on an offer with a “yes and...” you really need to be listening to know who, where, or even when you are. To practice this, we split into pairs to tell each other a story.

The first exercise was about “listening to interrupt”, something I noticed I do more often than I’d like. The objective was to derail the story and make it about you or someone else at every given opportunity. The feeling of being constantly interrupted is not a nice one and it means that the storyteller keeps losing their place and quite often gets flustered.

Then we practiced “listening to hear”. Rather than interrupt the person telling their tale, it was your job to silently agree with encouraging looks or the odd vocal agreement. This was a much more pleasant experience and made me realise that giving people space to speak is really important, even you when you feel like you have something to add.

The final time around, we were asked to “listen to ignite” - being inquisitive and asking questions to learn more, or to help the story move in a different direction when it naturally ran out of steam. In contrast, this felt more engaging and natural. Like the idea of “yes and...”, this helped the conversation grow and allowed it to flow in an organic way.

The overall purpose is not to say one way of listening is better than another, but to notice how each approach feels, to all parties. Each way has its place but the latter two were much more enjoyable than the first. The lesson here was certainly one I’ll be taking away with me, and practicing on a regular basis.

In the past, I’ve found myself holding back or avoiding opportunities (thanks, fear of failure). My personal quest for perfection means that either I never get finished or I never even get started. In improv you have to get over this fear, and throw yourself into a situation not knowing what the outcome will be or if it will be any good. No one involved in the moment knows how it will end. It’s likely you don’t even know who you are until your improv partners give you a name or occupation.

Some of the best scenes of the weekend were those that came out of a situation where an offer or a reaction didn’t quite land. Seeing a person try to figure out what to do next, and the comeradere in how the participants helped each other out with a blunder created some of the most hilarious and special moments. I also learned that when you do fail, it’s ok. If you make a ‘mistake’ through something misheard or an entirely ridiculous response, you carry on and the world keeps on turning. Although it’s not applicable to every situation, most of the time it really is OK.

It is amazing how worry of failure and the worry of “what’s next” means that we don’t really listen to others or stop ourselves from being present in the moment. The weekend taught me a valuable lesson in this, as well as many, many other things.

If you are a person who, like me, is anxious about uncertainty and not knowing how things will pan out, or is scared of putting yourself in a situation for fear of looking stupid, I cannot recommend improv enough. After one weekend of improv training I may not be the best improviser, but that’s ok. Like all things, it can be practiced and improved upon. And now if someone did greet me with the phrase “I ate a potato today!” I’ve learned how I can accept that offer and enjoy the uncertainty of how the story will unfold, and have a giggle in the process. I’ve even practiced my new skills since the weekend, by improvising a song about a colander.

Improv your life is a two day improvisation course run by the actress, improviser, and comic, Pippa Evans.