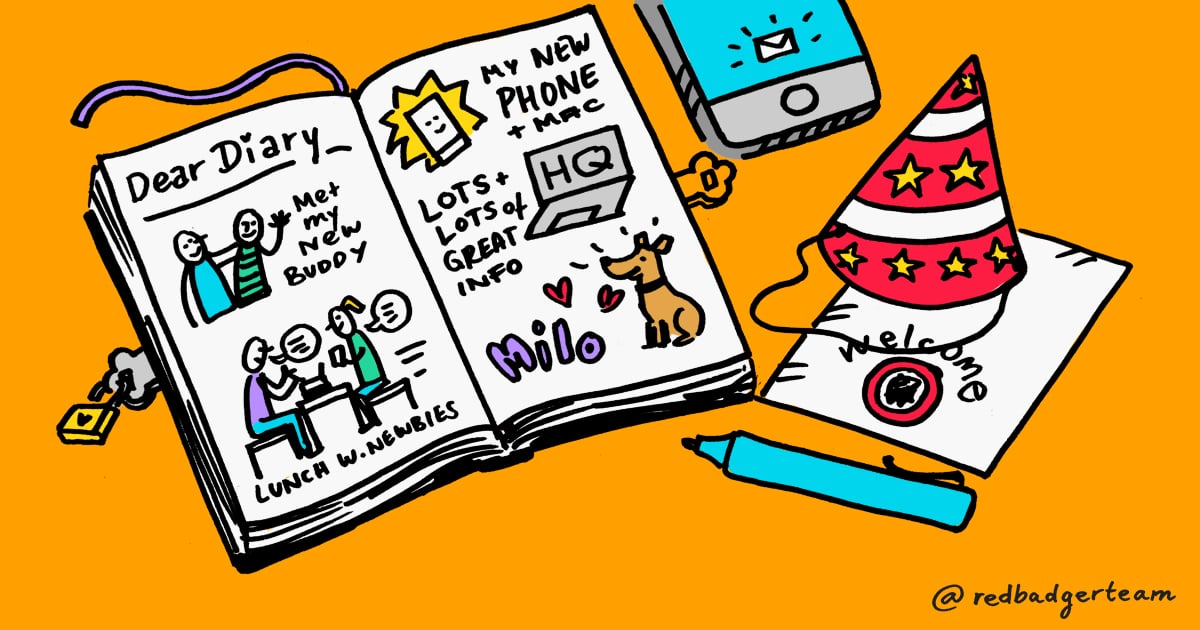 In May 2019 I decided to make the next step in my career and landed a job with Red Badger. Starting any new job fills you with all kinds of emotions, from excitement to nervousness. A new venture full of unknowns can make it seem scary, like it’s the first day of school all over again!

I wanted to jot down some notes of how my first week with Red Badger went to provide some insights for other newbies in future. I’ll run you through day by day, in true teenage blogger style summarising each of my first 5 days. At the same time I’ve pulled out some useful bits of information and tried to answer any questions I had in my head before joining.

Day 1: Reliving the first day of school all over again

Coming out of Old Street station, the first thing I did was to find the office. Thankfully it’s less than a minute walk from the tube, meaning it’s pretty easy to find. On arriving, one of the people advisors ran me through some of the basics and got me set up with my mac which I had pre-ordered a few weeks before joining. After setting up my emails, I was given a trello onboarding task list and shown the HQ information site.

Later I met my buddy who was on hand to answer all the silly first day type questions. They also gave me a tour around the office and introduced me to the project team which I was going to be part of including some of the exciting work we would be doing. In addition to a buddy to get you settled in, I was also told about mentoring which is available to everyone, where you can check in regularly with someone who can give advice for your career. I met a few fellow new joiners while having lunch in the kitchen area, which made me feel like I'm not the only one trying to take in all this new information. At the end of day 1 exhausted and tired, I had one last introduction to make which was the adorable office dog MILO!

Day 2: The power of chocolate

I wanted to say thank you for the warm welcome I had received from my team and say hello to a few others around the office, so I decided to use the power of chocolate including mini flapjacks and crispy cakes as a great icebreaker which introduced me to the different teams based at HQ. This helped me understand where the people, recruitment and operations, finance and events were and opened up some great conversations.

After lunch, I dived into the detail of HQ information. An internal site which has a range of info including some background on the company, culture and brand. A section focused on your career development and how to progress. Then the standard but important things like where to find your timesheets, expenses and payslips. Finally your benefits and which kick in after probation period, if your unsure about any these be sure to ask before joining. To have everything about a company located in one place was refreshing and gave good detail on all those silly new starter questions you have in your head when starting at a new place.

Started the day having a 1-2-1 with my line manager. I was given a run through on all things I need to know from monthly company meetings, peer reviews to how the annual training budget could be spent. We also took time to get to know each other and later in the day sent out my welcome email to everyone. It’s a great way of introducing yourself to the company.

Lunch involved discovering the local Whitecross street food market. In the afternoon, it was time for celebrations as it was Red Badgers 9th birthday. Cake and balloons waere a great way to finish off a Friday and get everyone ready for the weekend. Today I also received my phone for work and personal use. I got the option between the latest iPhone, Samsung or Google Pixel. After researching which would be the most beneficial, I took advantage  to make the jump from IOS to Android and got a Samsung S10.

With my first 5 days being split by a long bank holiday weekend, I had the chance to let things sink in and start my next week. I had been booked in on a ‘tiki tour’ in the morning. I must admit, being told we weren't going for an early Piña colada cocktail with a fresh slice of pineapple to start the day was a shame. Turns out a Tiki Tour is where you head off to a project and someone from the team will take an hour out of their day to run you through the work being completed, show you round the client site and spend some time to catch up. Really valuable, open to anyone and a great way to learn more about some of the interesting work going on.

Really getting into full swing now, kicked off the day with a weekly team catch up. After a restructure of the business recently into separate P&Ls things are still in experimental mode with teams being called a few variations. The names haven't been finalised and it feels good to be at a place that as it grows they are open to how teams work and are allowing employees to help share and get things in the right place to maintain the culture that exists. Later I had a catch up with my MD and we ran through how teams are structured in more detail, what projects I would be involved within my first few months and options for my own career development.

So how did I find my first week? Overall it has been AWESOME! A really enjoyable experience which has felt like a whirlwind. A mix of highs and lows, feeling tired from the sheer amount of new information you have to take in as is the case when starting any new job and a little stressful as the understanding slowly starts to fall into place. What has helped massively is there is a supportive environment. I’ve found I haven't asked a question which has been seen as silly or anyone not willing to help me in finding out the answer. I know it’s only 5 days but feels like I have made the right move for the next stage of my career. Looks like I will have many opportunities to be part of creating great digital products and services while also being able to develop myself and learn some new things along the way!