The missing headphone jack, notifications, and the eye of a designer 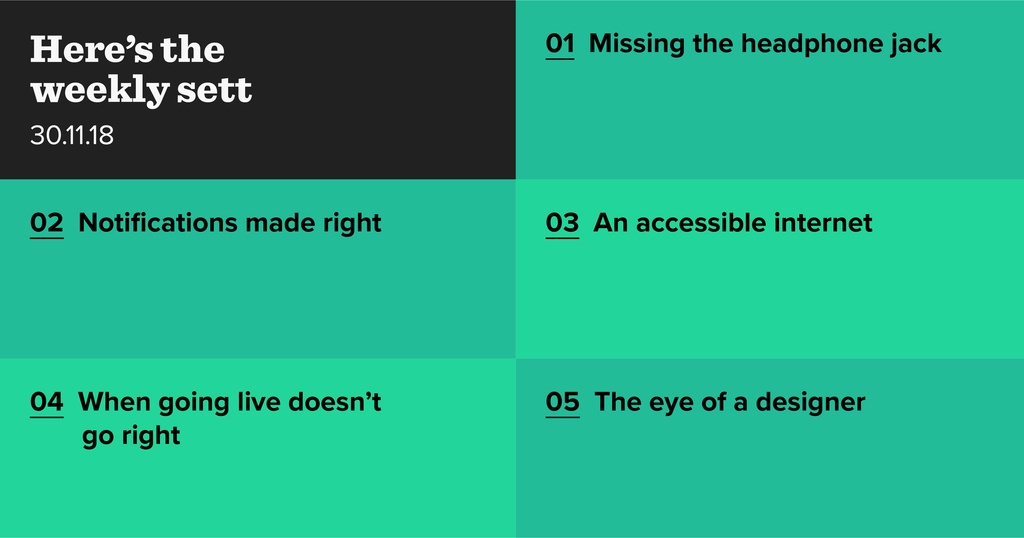 With Black Friday and Cyber Monday over (and Michael Buble lurking in the corner with some tinsel), here’s some articles to read whilst waiting for packages.

Number one - Missing the headphone jack

Apple’s decision to remove the 3.5mm headphone jack from the iPhone 7 was controversial and divisive, and still is. Fast Company has outlined its mourning for the headphone jack, which fell from all other brands of mid to high end smartphone designs overnight, with only Samsung and LG taking the last stand in this wireless world. It also notes the new products cropping up which are adding to the misery, such as the adapters that allow us to still plug in.

In 2016, the average mobile phone user received 56 notifications per day, and it’s probably even more today. As such, these notifications need to be designed carefully to provide users with relevant information and encourage them to engage with your app, over all the other apps vying for their attention. Nielsen Norman Group has outlined how to make notifications just right, including making sure it’s easy to turn notifications off.

For many internet users, to surf the web is more than a swipe of a finger or a click of a mouse. For those who are visually impaired, for example, it could involve voice commands and a screen reader, which is a lengthy process.

The internet is not made equal and the computer has not been adapted for those who need help. Quartz outlines how many users have been left behind as the internet developed in newer flashier ways and why developers and designers need to build more accommodating interfaces.

Those working in our industry will know the feeling of that edge of the seat moment when a product goes live. Will it work? Will the hours pay off? But for quite a few of us, things may not go to plan. The Register has covered those go-live-moments-gone-wrong, and outlined (with help from our very own Joe Paice) how these moments can be avoided and rectified.

Number five - The eye of a designer

At Red Badger, we pride ourselves on our ability to make things not only work well, but also look nice. But this Supremo quiz really puts our inner designer’s eye to the test. Try it out for yourself and realise just how graphically inclined you are.