Talk: Why it’s time for designers to share their power, Lauren Currie
Lauren is Head of Design at GoodLab and is the founder of the #upfront initiative.

“#upfront encourages and elevates new voices on and off public stages by working with conferences, businesses and individuals.”*

Before the conference all attendees were asked if they’d like the chance to appear on stage with Lauren. The premise was that those on stage (the presenters) can support those who want to be on stage (conference attendees/participants) without the scary bit of having to talk to people. It’s a great initiative designed to build confidence and reduce anxiety. With 150 people having sat #upfront at 20 conferences, they’re 30% more likely speak at an event.

Lauren also guided us through some projects she has worked on, from improving relationships between the public and police to transforming how the charity sector raises funds.

Talk: Heather Martin, Smart Design
Heather is VP of Design and gave a very slick run through of several projects which the folk at Smart had been involved in. The first three were variations on entertainment apps  which were first developed from bench projects, one of which ended up being sold to a Scandinavian TV company. The final and most memorable project was a ‘sports hydration drink and analysis system’ for Gatorade. The system allows athletes to consume drinks which are tailored to their specific dietary requirements. The system comprises of profile analysis and a unique drinks bottle design. The bottles house pods of concentrated ‘fuel formula’. They link directly to the athlete via smartphone, measure their fluid intake and come complete with a flashy orange indicator light on the lid.

Workshop: Rapid Service Prototyping, Jess McMullin
The words Rapid and Prototyping sold it to me and Jess really didn’t disappoint. Our task was to create a map of the journey a user would take in order to complete their Job To Be Done, and improve it. This job was to board a plane.

Before we got to play with plastic suitcases and wifi hotspots Jess gave us a run through of some Service Design principles. Describing restaurants as having inputs (raw vegetables) processes (chefs cooking) and outputs (plated dishes). We can consider touchpoints - people (waitress, cleaner, community) and channels (telephone, yelp, signage) as touchpoints. Visualising how these touchpoints come together gives us an understanding of the wider service which can be analysed and improved.  To deliver a service we have to look at more than what’s happening on the surface:

Frontstage: Customer interactions
Backstage: Waiter leaving to give the kitchen your order
Support: Servers for website
Evidence: Cue / affordance - folded bathroom roll is evidence that a service has been delivered

When developing a service with other people the team can gain a common understanding and a common sense of ownership. Jess’s weapon of choice to facilitate this is table top modelling.

Our team of six was tasked to build the airport of today, with specific reference to Winston, the Business Traveller and his job of boarding a plane. Using physical props we could each participate in the design and build of the current-state airport. The “messiness of life” is evident when the props are positioned in place and the journey built. Once the journey was complete we were asked to identify areas of painpoints as hotspots and then dot vote on areas to redesign. We addressed these areas and explored how things could work better, making changes to solve the pains and increase the value. 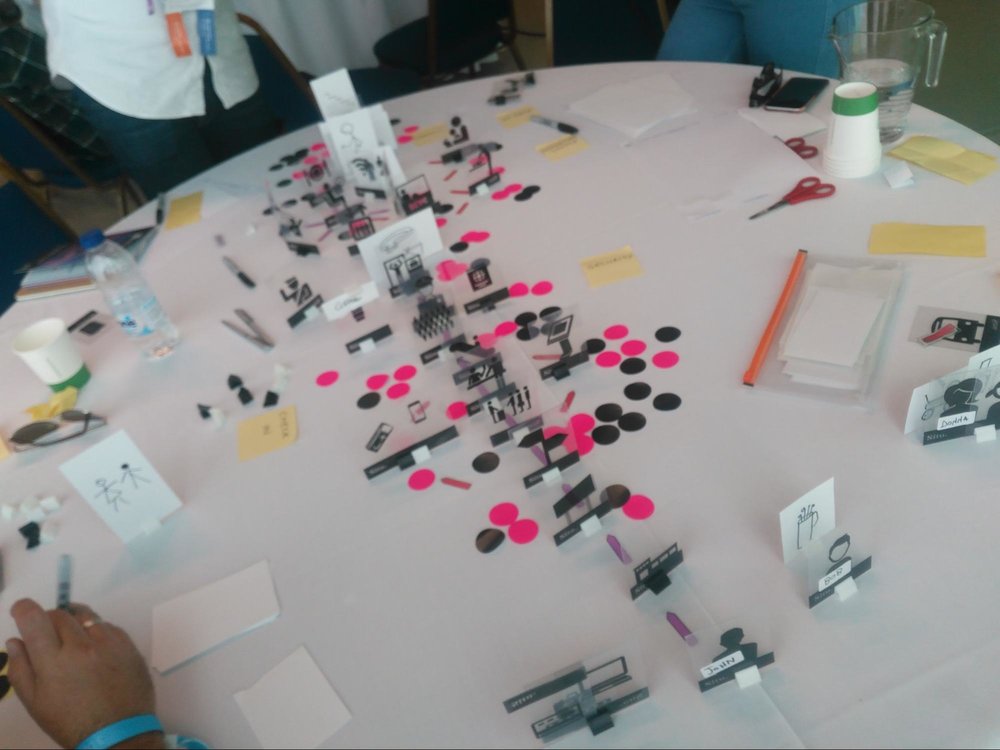 The whole team was engaged and hurried around the table placing props throughout the journey and it was eye opening to see the variety of different journeys built by the different teams in the room. This was a really enjoyable hands on session and demonstrated an approach of prototyping I’ll be using in the future.

Read my thoughts on Day 1, Product and Day 3, Design.

Join Us
We’re hiring, and if you fancy joining us you will get your personal training budget to spend on (amongst other stuff) workshops, courses and conferences of your choice.